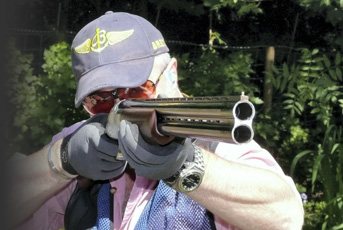 Huglu or ‘hooloo’ as it should be pronounced are by all accounts the dog’s sphericals when it comes to posh Turkish ordnance, or so say UK importers Edgar Bros. Well who am I to argue, especially since I know hardly anything about them apart from the fact Huglu’s previous ventures into the UK market have been less than notable. Huglu guns are built by a co-operative in a town of the same name, and Eastern European shooters have been buying them since 1962, so there has to be something that appeals; the competition 103FE seen here being an example of one of their all-round contenders.

Although there are various finishes on offer, Edgar’s have elected to import the 103 with what could be referred to as a singularly noticeable action. Decorated with profuse scroll and acanthus the entire steel sideplate is chrome-finished. As are the matching top and bottom tang, deep curving fences, trigger guard and blade, forend latch and manual safety. It’s only the top lever’s hinge that breaks the mould, with a gold double-headed eagle atop the spindle. To describe the overall effect as both unusual and remarkable would be an understatement, more a whoa than a wow factor!

Looking beyond the finish the action takes its inspiration from the more traditional, older fashioned designs in both depth and operation. Milled from a solid steel billet the monobloc boxlock action isn’t anything particularly unusual, the mechanical transfer of the lockwork simplistic in execution. Locking closed when a wide bolt engages within the lugs the overall appearance is remarkably that of a well known Japanese built American marque. All that’s missing is the trap door!

The 28” barrels are well struck and blacked with vented mid and 8-10 mm wide top ribs. Up front is a small brass bead and short flush fit multi-chokes along with useful 3” chambers finishing off the package. So useful that to a degree that you could actually pass this competition 12-bore off as a game gun with little difficulty. The wood to metal fit is exceptional and Huglu have proven their worth with the walnut, which is as good as any shotgun costing three times as much.

The walnut by my reckoning is somewhere between grades two and three although the pleasing figuring of the semi-pistol grip sporter stock regrettably doesn’t transfer over to the Anson latched Schnable forend. Fine and noticeably comfortable are the chequering panels whilst a soft, rubber, recoil pad with solid heel insert completes the stock, both parts finished with a semi-matte lacquer.

Dimensionally Huglu have got the 103 more or less exactly right for the vast majority of shooters, as the out of the box measurements are some of the most well considered I’ve encountered. The well rounded comb provides a drop at comb and heel of 1 7/16” and 2 3/16” with a length to the single selective trigger of 14 7/16” combined with what was for me the ideal degree of cast.

Physical and fit to shooter dimensions aside, the 103 throws up one or two anomalies. Shot over Bond & Bywater’s evening sporting layout, 60-birds later the 103 had highlighted certain interesting traits. For a shorter barrelled shotgun that weighs in at 8lbs, the gun’s ability to absorb recoil is surprisingly ineffective with all but the mildest of loads. The 28-gram Express Supremes and World Cups I used really made their presence felt. Similarly, the 103 doesn’t recover well, the effort required to control and transfer the muzzles between shots exceeding expectations, and was compounded by an overly heavy trigger pull well in excess of 7lbs.

Going away or driven birds proved little problem whilst the patterning from the short, flush-fit chokes was as good as any you’ll find. However, crossers and loopers especially opposing birds required sustained effort, the 103’s ability to develop kinetic energy sadly lacking unlike the enthusiasm of the gun’s ejectors, which were well timed and threw the empties wide and clear.

If any single aspect of the 103’s somewhat lethargic feel stands out it’s the point of balance. Over an inch in front of the hinges the pivot is in no-man’s land, the overall weight hanging between the hands. However, if Huglu could either shift this point and shave off a few ounces the 103’s characteristics would be transformed so adding that all important buoyancy.

There’s nothing inherently wrong with the 103 whilst the optional, colour, case-hardened action and oiled woodwork would lift the aesthetics and general appeal for the UK market. A whole host of butt and forend styles is available from the factory. Likewise the handling, whilst the 103’s balance didn’t suit me that isn’t to say other won’t find it exactly to their liking. The gun’s slow moving quality would be well – matched to those looking for an over & under capable of decelerating their shooting style.

For £1,100 you can’t be over critical, Huglu’s 103 is aimed at a defined market segment, something it does extremely well whilst offering a significant alternative to the existing choices. Built around a tried and tested action, quality of barrels, construction and overall mechanical fit is more than up to the mark - all of which will attract buyers on a budget looking for something that little bit different.

We Reckon!
• Huglu’s 103 needs to go on a diet
• Any finish bar chrome
• Definitely something different.