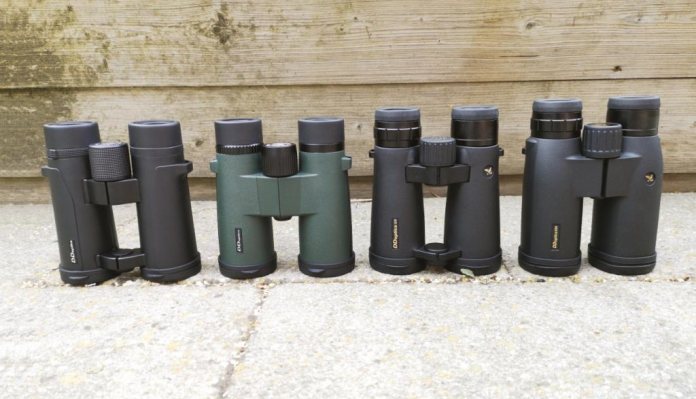 RUAG Ammotec recently announced that they would be bringing in an entirely new range of gear from DDOptics. The products have landed and include; rifle scopes, red dot sights, range finders, night vision and thermal units. In addition, they also offer an extensive range of binoculars, designed to cater to a wider price point, with the models aimed at three main categories. The first is outdoor/ leisure/travelling second, nature observation and finally hunting, which is where we come in.

Essentially, they have created a guide of their binoculars taking into account certain factors including; general suitability, magnification, field of view (FOV) and objective lens diameter. All with the goal of making choosing a pair much easier. I was sent four models to look at; Ultralight 8x42, Kolibri III 8x42, EDX 8x42 and the EDX HR 8x42, overall a nice selection!

The Ultralight 8x42s are all black and described as universal hiking and stalking binoculars, offering a FOV of 124m at 1000m. As the name suggests, they weigh just 645 grams, which is impressive, considering their 8x magnification and 42mm objectives. They are small and compact, measuring 145(h) x 128(w) x 52mm(d) making them ideal for a jacket pocket or small bag. The tubes are manufactured from an ultra-hard polycarbonate and the critical areas include metal alloys. The controls consist of metal, rubber reinforced adjustable eyecups and a +/-3 dioptre adjustment ring on the right hand side eyepiece assembly.

DDOptics have used an open-bridge design, meaning that there are two hinges connecting the tubes with a gap in-between. This lends itself to good ergonomics, allowing fingers to be positioned between the two, so offering a good grip for all hand sizes. It also helps reduce the overall weight. There is a well weighted and large rubbercoated focus wheel at the rear. Image quality is very good, the Ultralights use Schmidt Pechan prisms, which include a dielectrical coating, they are also nitrogen-filled and waterproof. The series also includes a choice of 8x34, 10x34, 10x42 and 8/10/12x50. Each pair comes with individual objective lens covers, a single piece rubber eyepiece cover, padded shoulder strap and a black Velcro case with strap and belt loop.

Middle of the road

The Kolibri line has recently been updated and is now in its third generation. These binoculars share the same specs with 8x magnification and 42mm objectives but are a step up from the Ultralights. They are designed to offer better image quality and boast a total light transmission of up to 87%, along with improved contrast and a wider FOV of 126m at 1000m. During use, they certainly appeared to offer a brighter image. The dimensions are not too dissimilar with these measuring 142(h)x130(w) x49mm(d) and they are even lighter, weighing just 615 grams.

They are manufactured from the same polycarbonate and alloys but come in a combination of black and green. Controls are basically identical, although they have opted for a single-hinge design that is positioned high up towards the eye piece assemblies, giving a little bit more room for hands. The green and black case that they come in is a great improvement over the Ultralights. It is manufactured from a ripstop fabric, and features a zipped, main padded compartment for the binoculars and also two smaller ones at the front, one zipped the other Velcro-sealed. The lens covers and bag strap are the same as the Ultralights but these binos come with a nice Niggeloh neoprene strap. This series consists of three variants; 8x32, 8x42 and 10x42.

At the premium end of the range are the EDX 8x32, which are recommended for safari and twilight hunting. They represent a significant step up in price and ability, which becomes apparent from the offset, although the FOV is the same as the Kolibri. They are again constructed of polycarbonate but include magnesium and aluminium components. The primary difference, however, is the optical quality. DDOptics have used extra-low dispersion (ED) glass and combined this with a new coating called ‘DDlucid’, which is an evolution of the original ELR (extra low reflection) coatings.

It is applied to the Schmidt Pechan prism, along with a newly developed PHC140 phase coating, which helps to suppress 99% of wave interference. In real terms, all this means a reduction in blurring, maximum resolution, improved contrast and light transmission of 89-93.7%. They show an increase in weight at 745 grams and measure 148(h)x128(w)x58(d)mm, making the largest pair tested so far. The controls feel slicker, the adjustable eye cups have distinct clicks in-between the settings and the dioptre can be adjusted to +/-4 using a much larger knurled ring. The focus knob covers the entire adjustment range in just 1.5-turns, making it easier to use. These binoculars are of an open-bridge design and come with the same accessories and case as the Kolibri. Other models in the range include; 7x42, 8x42, 10x42, 8.5x50, 10x50 and 12x50 variants.

The EDX-HR (high resolution) are available in 10x42 and 8x42 and sit at the top the DDOptic’s binocular range. These high-end optics are recommended for hunting, with durability increased, so that they can perform in the harshest of environments. The body is manufactured using a magnesium pressure casting. This essentially is an efficient way of manufacturing thin-walled and complex castings using this material, which is both strong and light. They have identical controls to the standard EDX, but are based around a single hinge design, which includes a serial number and the words ‘Made In Japan’, which is always a good thing! The ergonomics have been improved, with the tubes taking a curved square shape that now include thumb grooves on the underside to aid comfort. Optical performance has been improved over the standard EDX with the use of extra-large Schmidt Pechan prisms, but the coatings stay the same! DD boast improvements to contrast and flare reduction. Light transmission is now up to 94% and the FOV is 132m at 1000m. Weight is up to 820 grams and is noticeable, the dimensions are 156(h)x127(w)x52mm(d).