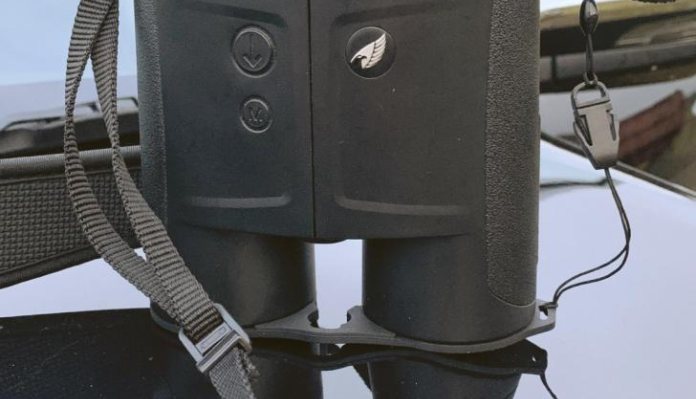 As a hunter, discovering hand-held laser rangefinders (LRF) for the first time, was like the scales falling from my eyes; literally. I picked up a second-hand Leica 900 monocular, then later moved onto their 1200 SCAN model. I knew I could shoot straight and where to put the bullet on a deer, but knowing the range almost exactly, opened up a whole new world of ballistics and hunting possibilities. Put it this way; if I could range it and it was within my ethical boundaries, it was going down!

The downside was that I also carried binoculars to observe and work out if it was shootable, so adding the LRF to my field package, although incredibly practical, was more kit to hump and transition to and from. Yes, the LRFs offered a low power magnification, which was useful at closer ranges, but the small objective lens did little for longer range target ID. The advent of rangefinding binocular (BRFs) solved this all in one hit, but back then the pennies were short, and the prices seemed astronomical.

I tested a set of Leica Geovid 8x56 BRFs in the early 2000s and they were amazing, but they were out of my reach at £1500, but I knew that was the direction I would eventually be going. Today, I have a set of Swarovski EL Range 10x42s and they too are amazing. I got mine trade, so saved some money; however, I am also aware that prices of £2000+ are just out of the reach of many shooters and more an indulgence unless you hunt a lot.

Since then, we have seen more BRFs appear that have been sub £1500, all capable, but some better than others. To this list I must now add the German Precision Optics (GPO) RANGEGUIDE 10x50 2800, as they hit the spot in quality, ability and price. They are a fairly new company with all design, engineering and quality control done in Germany that produce a wide range of optics. I first became aware of them when Raytrade UK Ltd, said they had picked them up and were putting their scopes on rifles. I have tested a few and not found them wanting.

Without a doubt, the RANGEGUIDE 10x50 hit the ground running at a very nice price of £1399, which has to make you sit up and take notice, even before checking out the full spec, so let’s do that! The build uses magnesium alloy body tubes and bridge/ hinge assembly, with an over-coating of a tough black rubber with gripping panels. They measure a compact 6.3” long x 5.3 wide and 2.3 deep, although at 35.2oz feel a tad heavy for their size. The build shows a single, deep bridge and a large, rubber-covered focus wheel at the rear. There are twist-up eye cups to suit those that wear glasses or those that don’t, each barrel has a separate dioptre ring at the rear for initial focus set up from +5/-5. Controls are on the right bridge surface with two buttons; nearest is marked with an arrow for ranging and the further with an M (menu).

The spec of 10x50 might be considered a bit OTT, as the generic 8x42 is still seen as the standard by most stalkers. However, the extra 2x magnification and slightly larger 50mm objectives, with few weight or size penalties get my vote. All glass surfaces use GPObright lens coating technology, with a light transmission figure of 87% in daylight. The package includes a hard case, Neoprene strap, microfiber cleaning cloth, CR2 battery and front and rear lens covers.

The menu is a simple one with all the features I require and does not include a ballistic package, which is not essential. The OLED display is simple with a small aiming circle in red/orange with information displayed underneath and can be set up for nine levels of brightness.

You have the following menu options: yards or meters notation, scan mode with three readings per second, angle measurement with a choice of angle or corrected/true target range displayed, horizontal distance, temperature and best or last target reading. To access the menu, press the measurement button, then the menu button for 2-seconds within the 15 second access period and toggle through options. It’s all in the manual and easy to set up.

The 2800 nomenclature is the maximum range in meters, which is 3,062 yards in old money. However, GPO realistically give effective operating distances on items like trees and animals; for example, the former is 1000m and the latter 700m. However, as with any laser rangefinder, this is dependent on target colour, shape, distance and weather conditions at the time. Unusually, they don’t give an accuracy rating, which most other manufacturers quote. To be honest, this too is variable for the above factors and also more importantly how steady you hold the binos. Although more stable than a monocular, it’s all too easy to over or under ‘ping’ the target and I always take 3-5 readings and note the average. Laser response is 0.25 seconds from the time of pressing the button.

Part of my test was up in West Scotland on a red hind cull, which gave the RANGEGUIDE a chance to prove itself against the likes of Swarovski, Leica and Vortex BRFs and it acquitted itself well right out to maximum range. As usual, readings differed between theses makes, but all were very much in the same ballpark to make little difference. The image was good, but I did find the focusing a little critical when compared to my Swarovskis, as the movement required was small and until familiar I tended to overrun and had to return. However, that was more operator error! The build quality and ability speak for themselves as does the excellent price for what are a top end set of binos. I have two small niggles: 1 – a green finish would be a nice option, 2 – the front lens cover appears an afterthought, as it was always pulling off; bloody annoying.