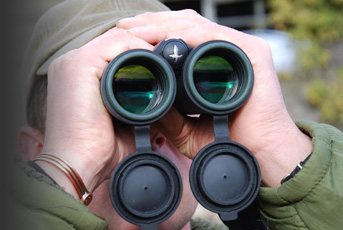 For me there’s always a moment of reverence and expectation when I open any Swarovski Optik box. I readily admit to liking their products and my latest scope - the 2-12x50 Z6i - has certainly lived up to its promise time after time. I also admit that my chosen binoculars are Leica 8x56 BRFs with integral laser rangefinder. Apart from incorporating this important facility, which was a major selling point for me; their performance and optical quality impresses.

Long before I saved up enough money for the Leicas I borrowed a set of Swarovski’s top binos the 8.5x42 ELs for a trip to Africa. This was my first exposure to high quality binoculars and they did not disappoint. My personal policy on optics is buy the best you can possibly afford and despite the outlay it has proved the right way to go…

In 2008 I was invited on a Swarovski press trip to hunt in Hungary, which was to showcase the new, higher spec, Z6 long range scopes and also show off something I did not think was possible. As we were all issued with a set of the new and improved EL binoculars.

To be honest I was not expecting that much, but I was - as were the other journos - knocked out by the actual improvements. Even some of the Swarovski staff who had not really looked in detail were impressed.

Most telling for me were the fact the new ELs offered significant improvements in colour balance, clarity, edge to edge and peripheral vision over not only my Leicas, but also the original EL. Swarovski set up a proper testing bay that included comparable top end binos plus their own models.

Though looking similar to the old ELs the new versions incorporate the latest Swarovison technology that includes field flattener lenses that give a true picture with no curvature at the edges. HD lenses minimize colour fringing (chromatic aberration), with a series of coatings to improve light transmission etc. Physically they are marginally smaller and lighter with a more ergonomic shape, but retain the familiar, green, rubber armour. They have also improved on the pull-up eyecups with a middle position that allows more versatility for glasses wearers. As before the focus ring is also used to set the individual focus/dioptric adjustments.

The objectives have individual, flip-off lens caps that are attached to the barrels, plus the usual single one for the eyepieces. New is the quick adjust strap, which is a vast improvement over the older design. There’s also a new carry case that can be attached to the strap.

The build shows thumb slots under the barrels that place your hands in the perfect position to operate the deep focus drum. This gives approx 2 ½ - turns of movement and goes down as close as 4.9ft to infinity. General feel and handling is excellent!

Who Turned the Lights On?

Well that’s the technical explanation over, but the bottom line is just their sheer ability. In Hungary they had set up full size animal targets at 100, 200 and 300-metres. I looked at the 100m fox through my Leicas, which was good and bright, likewise through the standard ELs. Doing the same with the new ELs was like someone turning a spotlight on the animal; even on a bright day. This was even more apparent when out hunting deer and boar as dawn and dusk performance was truly enhanced, dramatically improving target ID and general observation.

It’s now over a year later and I have for the last few months been testing a set of the new EL 8.5x42s. With no time constraints I could afford to give them a more working overview. One thing I had to do was to leave my Leicas at home and use a separate laser rangefinder, though I also did some comparisons between these two and another top brand.

Without doubt you do get a dusk/dawn edge with the new ELs that allows just that bit more/clearer observation and target acuity in duller conditions. Most interesting was the colour balance, as my Leicas are pretty good in that area and certainly superior to another top European make. Again the ELs just aced them, with blue pheasant feeders really showing the difference between true colours. For stand-alone binos I don’t think there’s anything currently out there to touch them!

The Subject of Cost

Now the price! In Hungary in 2008 it was intimated that the new ELs would be around €2200 (8.5x42) and €2500 (10x42), which given the exchange rate near translates to pounds; ouch! No matter how good they are; that’s a lot of money and if you are an existing EL owner could you afford to trade up on your old model? My initial view was they would price themselves out of the market.

However the 2010 UK prices are considerably better at sub £2000, with an average increase over the original ELs of around £240. I know a good few Swarovski owners who will buy the new ELs regardless, as they love the brand and feel they must have the top product.

For me they are definitely the best binoculars I have ever used and to quote an unnamed Swarovski employee I was talking to; ‘perhaps they are too good for human eyes’, which could be the case? Their sheer improved abilities have been commented on by everyone I have let use them; it’s as simple as that!

From my view the next logical step is to incorporate a laser rangefinder into the new EL system, which would make them unbeatable. Currently this is offered by Zeiss and Leica only. For me going back to a separate rangefinder is not as practical as my BRFs, however, this is compensated for by the sheer ability of the new Swarovski ELs. To sum it up you could say; if Carlsberg built binoculars they would be the new ELs…

For: Probably the most advanced binoculars to date
Against: Not cheap
Verdict: IIf you want and can afford the best then the new ELs are it…