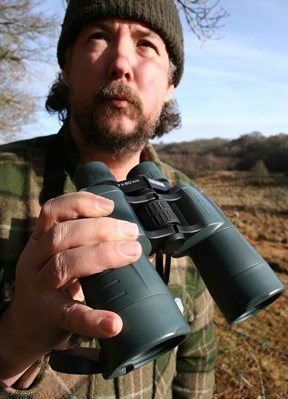 I am in a bit of a dilemma here. Usually I preach the gospel according to the more you pay in terms of optics the better quality you get. Well the words ‘Nemesis’ and ‘never say never’ come to mind here. Sometimes, and only sometimes, a real bargain comes along and it has been staring you in the face for a while. So I had to eat my words recently, as to date I have bought 5 pairs of Yukon 7x50 binos for myself and fellow stalking chaps.

Let’s start at the beginning. I’ve recently been testing a Night Vision (NV) scope from Thomas Jacks and I was mightily impressed. With the scope came a set of 7x50 WA Yukon Binoculars priced at only £69.95. Well you can imagine my first thoughts, ok great NV, cheapo bins. Oh my, what a shock I was about to have. Some times, there is a good bargain to be had and these Futurus bins are certainly a bargain. At £69.95 they are about ten times cheaper than a set of top end spec binoculars of a similar power. So do they offer one tenth value? Well I used these binos in Scotland under the most atrocious February gales on record and to be honest had no real hopes for them, but after the week was up and three deer were in the bag, I soon realized that these Yukon binos were actually rather good.

Because of the price I had less care over the way I used the binoculars than I would perhaps a more expensive set. In fact those Futurus 7x50 WA went thought hell and back. Early morning starts, hot house exits and cold wet clammy woods, then back into condensation setting heat of vehicles… but the Futurus held their own. Optically the seven power gave ample magnification and a wide field of view, whilst the 50mm aperture gave more than enough light transmission to the eye. The term true colour lens coating for maximum game recognition is often bandied around in optical sales, I had my doubts, but as I said, three Roe deer later, who was I to complain.

Optical quality was very good, maybe not as good in really low light as the major manufacturers, but let’s face it, certainly not ten times the difference in price. They were totally waterproof and fog proof, and the image was clear and crisp, despite the variation in temperature conditions. The green rubber armour outer skin was both practical in the field and weather proof, my only minor gripe was about the lens covers to the objective lens that flipped up on the wrong axis. By this I mean they flipped up out of the way just fine, but the concave recesses catch water, so I repositioned the lens covers to open and stay open in the downward position.

The central focus wheel was stiff enough that mounting and removing the bins did not reposition your previous focus setting, and the right eye pre-focus was both accurate and waterproof. The weight of the bins is just over 1 kg and they are easily carried on synthetic neck strap provided.

I was impressed enough to buy myself and my parents a set, and when my stalker friends saw the Yukons they wanted a set. At £69.95, these binoculars are a bargain, even if you just use them to carry in the car for occasional use or backup.

Personally I use them all the time, and I feel no compromise in viewing excellence and if, heaven forbid, they were to fall down a Corrie hill side, another £69 quid to replace them wouldn’t break the bank. The Futuras line starts at the 7x50WA model and extends to 10, 12, 16 and 20 power. I have not tested these but they are next on my list.