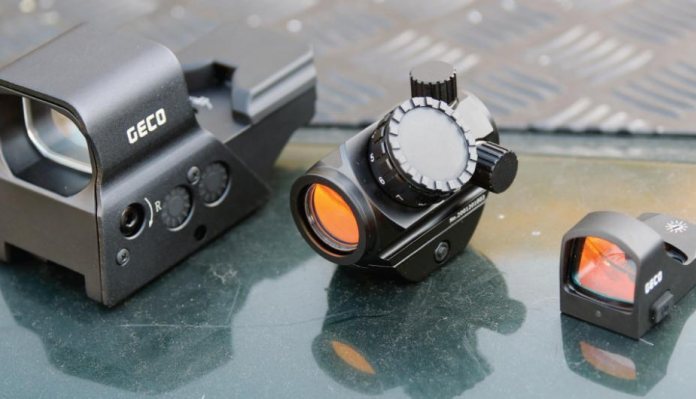 A few years ago, the name GECO meant a good selection of well-priced ammunition for both hunting and general shooting needs. But these days they’ve added a range of optics to their portfolio, which they have recently expanded to include three red dot sights. The builds all look familiar with a mini refl ex-style (the Open) probably based on the original Doctor design, and not dissimilar to an AimPoint Micro (the R20). Finally, the MultiDOT; a larger refl ex design offering a number of features, which is near identical to the Konus Sight-Pro R8. Build quality looks generally good and prices appear keen, lenses are all toughened glass and where applicable nicely bloomed. If I was a betting man, I’d say made in China or similar locale, but then again, so are most optics of this type these days!

First up, the Open; the smallest at 46mm long and weighing only 30-grams, this L-shaped design is a tad more sophisticated than some others of its type, what I particularly like is the rubber-covered, combined rheostat and ON/OFF switch located on the left of the lens frame. A brief push turns it on and gives six levels, the brightest easily seen in bright sunlight. The 2MOA dot is easy to see but does not obscure the target at longer distances. Another nice feature is that the battery compartment tray is on the side, so making changes fast and easy and preferable to having to remove the sight from its base. It uses the smaller CR1632 cell. However, it does not come with a dedicated base, instead it’s configured to fit the common mounts for this type. I fitted it to a MAK magnetic mount for my Blaser R8. Adjustment is by slot head dials with a locking screw at the rear, an L-shaped Torx driver and screw driver are included for fitting and zeroing, and a rubber cover is supplied.

The R20, is a compact, tubed design of familiar build, it measures 30 x76mm and weighs 130-grams, which includes a Weaver/ Picatinny, screw-tensioned claw base. This is removable, and an alternative system can be substituted. The layout differs in two ways, the windage turret is on the left, the rheostat drum also, but angled in at 45º. So, if you’re used to the windage on the right, you might initially mount it back to front; I did! Turrets are capped with slot headed adjusters. The dot again is 2MOA and offers 11 brightness settings, shape is good and easily seen even in bright sunlight at maximum. Oddly the numbers on the drum are printed upside down, no big deal as you can see what they are; why? Power comes from a CR2032 coin battery housed inside the rheostat and a bikini-type rubber lens covers are included.

Now the MultiDOT, which, as the name suggests, offers a lot more than just a single round aiming mark of a specific size. First impression are of size; as it’s big for a red dot at 260-grams and 105 x 75 x 60mm, lens area is 30 x 44mm. It runs on a single, LIR2032, rechargeable battery located on the right and comes supplied with a USB charging cable that jacks into the sight and 2-pin USB adaptor. A red indicator shows when it’s charging and turns green when it’s full, clever is the fact you can substitute the LIR cell for a standard 3V CR2032 battery, so offering a dual power option. Fitting is by a Weaver/Picatinny, lever-clamped base with adjustable tension screw.

Being a reflex, the dot is projected from the rear onto the forward lens, which has a deep (40mm)weather cover over the top. This open-type build does suffer from water getting onto the lens, which refracts the dot, so the overhead protection makes it more useful in all conditions. Windage and elevation adjustment is by Allen-headed screws on the left side (windage) and in front of the dot projector (elevation). Different, is the fact that you can select both red and green colour options by pressing one of the two rubber-covered buttons (red front green rear) on the left of the body. A quick press turns it on, then you get six levels of illumination with a 3-second press turning it off. Depending on the lighting and ground conditions, both colours have their uses.

At the rear, is a rotary dial that allows you to select eight reticle options. From the left, you get a circle with central dot and outer arms at 12, 3, 6 and 9 O’clock, 10MOA dot, 3MOA dot, inverted chevron, open cross with centre dot, inwards chevrons (left and right) with centre dot, circle dot and finally a horse shoe with three vertical dots. I tend to find the more complex patterns a little small for the limited range that a red dot offers, as they tend to fill in at the centre, so obscuring the target a bit. For me, the MOA dots and inverted chevron all have possibilities; keep it simple, stupid!

I shot the dots on both rimfire and fullbore rifles without any problems and would use the R20 for driven hunting and like the greater illumination subtlety from its 11-position rheostat and mounting system. The Open is small and light, probably good for a Long Barrelled Pistol or as a backup on a scope, again with a good dot, but you have to factor in a mount, which is extra expense. The MultiDOT is a bit over the top in both size and choice, but I do like the more protected lens and dual power options.