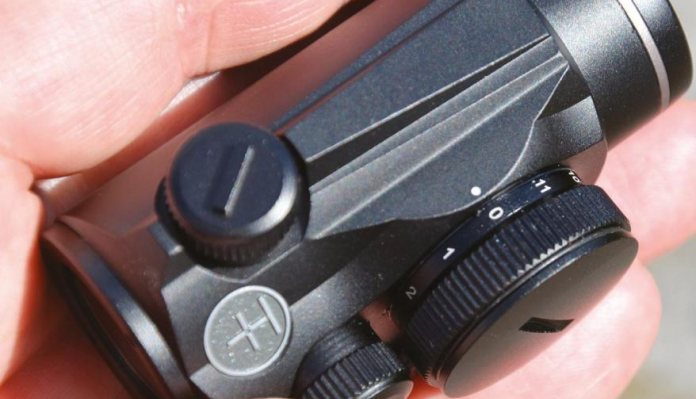 Red Dot sights are an exciting option and a radical departure from conventional optics. In fact, there’s something quite liberating about switching to one, after using a scope for an extended period. It’s not just about being different though, as they are an incredibly versatile tool suited to many applications. A big part of that comes with how it’s used and mounted in relation to the shooter.

Where a conventional scope normally dictates around three inches of eye relief; the distance the eye is from the eyepiece lens for a comfortable head position and correct focus, to obtain a full sight picture, the dot has no such restriction. That means that it can be ideal for pistol or rifle use, as their 1x power (zero magnification) and lack of parallax issues allow them to be used at arm’s length on a rifle or handgun or more conventionally mounted nearer the eye on the receiver of a long gun.

Other factors you might not be aware of, are the fact that the aiming dot, once zeroed, does not need to be centred as you would with the cross hair of a scope. Essentially, you see the target and place the dot where you want the bullet to go and pull the trigger. Plus, you can use them with both eyes open, making them great for fast fire and quick target acquisition use. However, there is also a downside, as it’s easy to lose the dot in the view, given where your zero point ends up. Used on their own, or in conjunction with a conventional scope, they add a dimension to your shooting you might not have been aware of!

On test, here, is one of the brand-new models from Hawke Optics and I have been itching to play with one of these ever since I saw it displayed at the British Shooting Show, earlier in the year. My model is the Vantage 1x20 Red Dot and it came supplied in a neat protective box, along with rubber lens caps, a honeycomb filter (kill-flash) that stops the target seeing the dot from their end. Along with Allen key, lens cloth, zeroing tool, and battery. 1 x means no magnification, and the 20 relates to the objective lens measured in mm.

Pick it up, and it feels very well made, with high-quality aluminium used in its construction. Integrated mounts are part of the design and, whilst my tester was sent through with a Weaver/Picatinny-compatible base, there is also a version available to fit 9-11mm dovetail rails. At less than three inches long, it’s a mini marvel and that compactness does make it suitable for a host of pistols and rifles, where the addition of a larger sight may be impractical, or just ruin the balance.

I happened to have one of the new Air Arms S510 TDR R rifles in for review at the time of this test, and with the quick addition of Hawke’s own adaptor rail clamped into place, the Vantage could be bolted on in seconds utilising its Weaver base. This combination instantly felt right!

Onto the test range and time to zero. Turrets are low-profile with screw caps, with a raised bar in the top that can be used to turn the slotted adjusters; clever. Click values are 1MOA @ 100 yards, which equates to approximately ¼” at 25. The dot size is 3 MOA at 100, so roughly ¾” at 25yds, which is near ideal, much bigger and it will start to block out smaller targets and aiming points as the range increases. With 11 brightness levels from which to choose, via the side-mounted rheostat drum, all conditions are catered for. Despite being non-magnifying, the unit still incorporates 25-layer, multi-coated optics for maximum clarity, and the precision of the dot is impressive. Fast target acquisition is part of the deal, so a direct ‘point and shoot’ routine soon takes over.

Read the instructions, and it advises the obvious, that a brighter level should be selected for daytime, yet, on test, I found level 5 to be perfect, offering a crisp, clearly defined dot, yet not over bright. Obviously, battery strength may dictate selection further on and the type of target viewed can also influence brightness levels required. I chose one with an inner dot, which I guessed would be more easily defined at distance, as I really wanted to see what sort of performance was possible.

To be honest, I’m always amazed at just how accurate you can be with a red dot system, as that rather more simplified approach, and in this case, a non-magnified sight picture, always sounds like a big disadvantage over a normal scope. Wrong again! Over my 38-yard range and with a slowed deliberate aim, I managed groups easily coverable with a 10 pence piece. Pretty damn good, and very satisfying. Keeping the dot centralised within the viewing window is not necessary, as I have already explained. It did cross my mind that some form of dedicated timed competition using red dot sights could be great fun too, so maybe something to be arranged further down the line. Which is something the firearms guys do already with their Action shooting disciplines with 22 rimfire rifles and long barrelled pistols, I’m reliably informed by the Editor.

All very impressive, but are there any negatives? Well, nothing major. It would be nice to have alternate off stages between the brightness levels on the rheostat dial, rather than having to twist back through each stage, but hardly a major downer. Having to remember to switch off illumination is perhaps the biggest downside with this type of sight; if you forget, you’ll end up with a dead battery when you least need it. The biggest problem with these system is water on the lens surfaces, as it will refract the dot into a red spider that reduces vision dramatically.

Hawke offer a two-year warranty with this model and all the usual guarantees, such as nitrogen-purged, water, shock and fog proofing are here. So, at £69 all in, it’s hard to fault this Hawke Vantage Red Dot. A bit of a bargain, and an awful lot of fun!