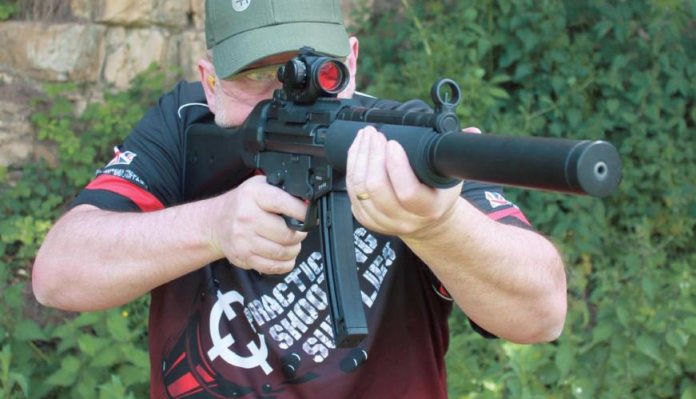 First up was the Hawke Spot-On 4, it’s a multi-discipline red dot sight with some very modern features. The 4 relates to the size of the red dot, being 4 MOA (minutes of angle) in diameter. The size of the dot in a red dot sight is very important, if a dot is too small it may be fine for a bit of target shooting but of no use when it comes to the quick shooting. Four MOA is ideal, the Spot-On is a small one power magnification sight with a 25mm diameter set of lenses. It really is made to be used for practical stuff and comes with a riser mount made for mounting the sight on an AR type platform. The riser base also has a quick release lever mount system.

For testing I put it on my GSG-5SD .22 rimfire, this has a Picatinny rail and was the rifle I began my practical shooting with, winning many a club shoot with it. I fitted the sight and, for the first time in 30 years of reviewing, when I fired the first shot at 15m it hit the brown bullet patch I was aiming at in the middle of the A zone. I was so amazed, I shot again and right in the first bullet hole it went. I shot a single round on a blank bit of the card then processed to shoot five more at that making it one ragged group. Without even having to move the sight adjustments a single click in any direction.

The sight is parallax free at 10-yards or nine-metres, normal convention means that all optical sights come from their respective factories with the reticle or dot optically centered, I guessed the GSG sight rail was in the right place also to put my bullets on the dot. I did flip the quick release lever the wrong way around on the mount – D’oh! I should have properly read the instructions, I guess.

The sun was shining exceptionally brightly on testing day, the Spot- On 4 has six brightness settings for the red dot. I had no issues at all seeing the dot and I shot it purposely with the sun’s rays directed into the sight. The sight picture of the targets too was superbly clear, something to do with the 25 layers of coatings Hawke put on the lenses.

The controls on this sight are brilliant, and I mean that – I have used far more expensive sights that, to be frank, have rubbish controls compared to this Hawke. To turn the dot on you just press either the minus – or plus + rubber buttons.

After five minutes the sight turns the red dot onto standby mode to conserve the battery, but still needs to be fully turned off, it runs off a CR2032 3v flat button cell.

Hawke supply a long shank Allen key, as they also supply a low-profile mount non-quickrelease clamp if you want to use that, the long shank key is needed to fit through the riser mount to take it to remove it from the base of the sight. I found the AR height riser perfect for the rifle I was using. Hawke also give you a lens cloth and rubber lens covers that fit over the ends of the sight. I didn’t want to take the sight off to be honest, for practical shooting it’s spot-on.

Next up was the bigger Hawke Vantage model, this has a 30mm diameter lens and straight away I could see that it’s aimed at the Airsoft market. It comes with a Killflash or Honeycomb sunshade, as Hawke call it. This fits in the front objective lens and does two things: it helps hide the Airsoft competitor by masking the reflection off the front lens and also protects the lens from possible damage if it gets hit by a well-aimed 6mm plastic ball fired by an opponent.

The 3 MOA diameter red dot is also better for Airsoft as they shoot at longer ranges, so it won’t mask what they are aiming at or restrict their vision when looking for the opposition. The sight has a sleeker look to it than the Spot-On 4.

I fitted the sight onto my GSG-5 with the Killflash on the front, it has a very secure clamping system for a Picatinny rail with three screws. With the Honeycomb sunshade fitted it does slightly degrade the sight picture, but that’s the price you pay for either protecting the lens or offering the concealment.

As I’m not an Airsoft player I took it off and tested it again in the bright sunlight. It worked very well; I was able to place my .22 rimfire exactly where I wanted them at 25-yards.

It has 11 brightness settings on a large rotating dial on the right-hand side of the body. It runs off a CR2032 3v held within the dial. The windage and elevation turrets have caps with a raised bar on the outside which you use to turn the dials. It also has a set of rubber lens cap covers to protect the lenses, these even fit on when you have the shade screwed into on the front. You also get a black fibre lens cloth, an Allen key for the clamp and a red plastic tool to take the battery cap off rather than scratching the caps black surface with a coin, nice.

Both sights come with a Hawke two-year warranty, the Spot- On 4 is a shade under a 150 quid and the Vantage is 79. That’s great value for two very good practical red dot sights.

Thanks to Jamie at Hawke for help in production of this article.