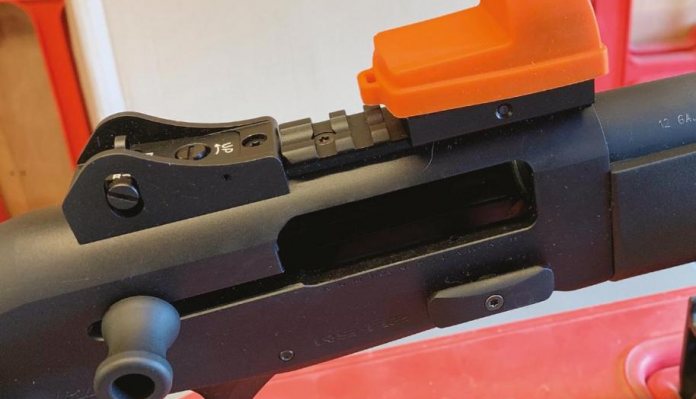 I have massive respect for the ability and quality of Kahles optics and on my first trip to Africa back in 2005 their Helia CT 3-10x50 was my scope of choice and it was not found wanting! In the last few years, they have been a bit more diverse in their product line, with a very nice set of laser rangefinding binoculars (Helia 42 RF) that hit the spot-on ability and price point. Now they have taken a further step with their first red dot sight.

Called the Helia RD the design follows the reflex or open build with a 26 x 22mm standing lens at the front that the dot is projected onto. Kahles use a unique anti-reflection coating for clear visibility. Although designed for driven game shooting, as the action is close up, fast and furious and you need both eyes open, it would be equally well suited to Action-type shooting with 22 rimfire, shotgun or lever-action rifles.

Mounting-wise, there’s the option of a removable Picatinny mount or an adapter plate for most popular European attachment systems; I opted for the Pic base. The RD measures 55 x 28mm and weighs 42 grams. The red dot is 2 MOA, a good size, as it’s easily seen yet will not cover too much of the target as the range increases. The CR2032 battery sits in a sidemounted tray so easy to change.

Kahles include three Allen keys for attaching the base to the sight and a rail and for zero adjustment. Also, a rubber, Day-Glow orange sight cover that holds a spare battery inside.

Front/left are the two illumination controls showing as +/- buttons, a push of either one turns it ON and you can toggle up and down the four settings. Holding either one down for 3-seconds switches OFF, Kahles include their intelligent AUTOMATICLIGHT function, which remains on for 3-minutes, then goes into standby mode then come on as soon as the rifle is moved. If left on for 4-hours, it will shut off. When the dot flashes, that’s the low battery warning.

Elevation adjustment is on the top and windage on the side, click values are 1.5 cms @ 50m, and you get 30-clicks per rotation and five full turns of movement, which translates into 88” in both planes. Pleasingly, Kahles do not use a lock on the adjusters, which I have found on other makes can cause zero creep. In use, no complaints, even in bright sunlight, the dot at maximum illumination is easily seen and on dull days level 2 is usually more than enough and 1 for seriously low light too. Dot shape and size was good, with a tiny bit of flair at maximum setting, but nothing that would spoil your aim.

Overall, an excellent example of a modern, reflex red dot, at £330 not the cheapest but compared to others an absolute bargain and, as it’s from Kahles, you can guarantee quality and ability.