Pros and Cons of Lasers for NV Use 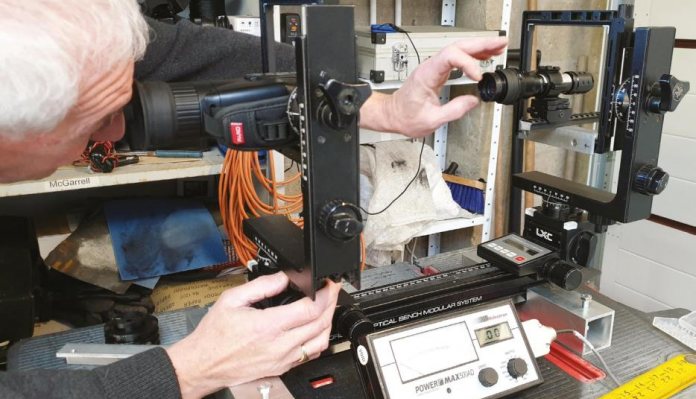 Bruce’s Professional career was spent building pipeline testing and certification equipment for the Oil and Gas industry. He’s also a keen sporting shooter and has over many years built some outstanding Night Vision and Thermal spotting equipment and rifle scopes. He’s very well regarded on the UK NV forum, where he’s one of the resident NV experts.

Other than the very best Gen3 image intensifying night vision (NV) scopes, all NV kit requires an external source of infra-red (IR) illumination. Not all IR is equal, you’re as responsible for choosing and using IR safely as you are for having a safe backstop for every shot. The main choices are the IR wavelengths used and type of source. Visible light wavelengths range from 390 – 780 nanometres (nm) and IR used for NV covers ranges from 800-1100nm. Traditional image intensifying (tubed) NV kit works better with 790-820nm, although some higher performing tubed units will work with the more common 850nm.

Pass any Industrial unit at night and you’ll see security cameras with subtly glowing red lamps, these are likely 850nm floodlights. If the lamps appear almost black, they’re the more discreet 940nm variety. Digital NV works with any wavelength in the visible range and in the IR range up to 1100nm, although as the wavelength increases the detection sensitivity decreases. Most digital NV works well with 850nm, the more covert 940nm also works, although is 25% less effective, so range is reduced.

1. Laser pointer-type, which can be focused to produce a very narrow, pencil-like beam. The first to be developed and are more commonly used with older tubed NV kit

3. Vertical Cavity Surface Emitting laser (VCSEL) are the latest technology. Lasers that look like, are powered like, and produce a beam similar in width to an LED but are significantly more intense. The additional intensity of IR these device produce, has allowed the development of highperformance full HD NV digital imagers such as the PARD007 rear add-on and PARD008 dedicated day/night scope. Other HD digital NV scopes like the Pulsar N455, Yukon N470, ATN X Sight 4K and Sightmark Wraith also benefit greatly from the use of a VCSEL. When used with non-HD digital NV kit they can illuminate targets to astonishing ranges but, on the downside, will also overload the sensor if reflectedback at short range, causing the display to ‘white out’.

I should mention that overloading does not damage digital equipment, as circuitry prevents that; unlike traditional tubed NV kit, which can be permanently damaged when exposed to too much light. Hence older NV equipment has a lens cap with a pinhole, for use when there’s a lot of light present.

All three types present some degree of risk of damaging the eye, so it’s very important to know what the risks are and how they can be minimised. As we all know, after we’ve been shooting at night, sudden exposure to bright light can be very uncomfortable. This is because our pupils adjust, expanding to let in more. It’s generally accepted that the maximum diameter that the pupil can expand to is 7mm and that’s in young people, and in older its nearer 5mm. When exposed to bright light we automatically blink or close our eyes. This is an automatic safety response, known simply as the blink reflex. However, and this is the really important safety point, because our eyes don’t ‘see’ IR light, there’s no blink reflex and therefore a very bright source could enter and potentially cause damage.

Damage is done by the IR being focussed by the lens in the eye, concentrating all the energy in a very small area at the rear, which can rapidly overheat and damage the light-sensitive cells. The amount of damage possible, depends on the size and intensity of the IR beam entering and the length of time to which the eye is exposed to the beam. Given that knowledge, how do the three types of illuminator compare for safety?

The Laser Pointer-type is by far the most dangerous, mainly because it can be focussed into a very narrow beam, much smaller than the pupil, so all the power can enter the pupil. In addition, because it stays very narrow over long distances, the risk of eye damage, even at tens of metres from the source is still high.

The LED illuminator is the safest of the three. Even when fully focussed, the beam is much wider than the pupil, so only a fraction of the power can enter the eye. Viewing an LED illuminator at close range for extended periods could potentially cause eye damage, but it’s highly unlikely.

VCSEL illuminators fall between the aforementioned two, so there has been much discussion about the legality and safety of these devices. I’m fortunate to have the test equipment and facilities to test both power and radiance for all three types of illuminator and have tested many examples of each. It is true that VCSEL illuminators can exceed the 500mw power guidance limit for class3B lasers, but none of those I have tested were able to put anything like 500mw through a 7mm aperture.

In other words, the power reaching the back of the eye is much less than the maximum specified/recommended for a class 3B laser. Unfortunately, the laser regulations are based on all the available power entering the eye, and they take no account of the pupil size. However, VCSEL IR laser illuminators used for NV can also be classified under the same safety standard as LED illuminators, and all the VCSEL based IR units I’ve tested to this standard have fallen into the Risk Group 2 classification. At present, there are no restrictions on the sale, ownership or use of Risk Group 2 equipment. Some VCSELs now use diffusing lenses to disperse the light before it gets to the focussing lens and, although it does reduce the range slightly, it greatly improves safety/reduces risk.

The simple rule is NEVER to look directly into the IR source, particularly with laser pointer-type, but if that happens, then make the exposure as short as possible: never stare at an IR source. Defocusing will widen its beam, improving its visibility without looking directly at it. This also dramatically reduces the amount of IR power that can enter your eye. A commonly asked question is; if I don’t look at the source, how do I know it’s switched on?

IR in the 800-850nm range still produces a faint red glow, and simply putting your hand in front of the illuminator in dim light usually shows this. A piece of white thread dangled in front of the source can show if IR is being emitted, or better-still your mobile phone camera will efficiently capture and display far more IR light than your eyes. Of course, if the IR is correctly aligned with your NV device it should be immediately obvious from the image displayed, if it’s switched on. It’s more difficult with more covert 940nm IR sources, but I’m not aware of any of the more dangerous laser pointer-type IR sources operating at that wavelength.

What should I buy?

Tubed NV kit: get a Laser Pointer illuminator in the 800-820nm range. Non-HD digital NV kit, such as the Yukon Photon, Pulsar Digisights (other than the N455) and pretty much all rear add-on home builds and similar styles of commercially available add-ons: an LED-based 850nm unit will get the job done out to air rifle and rimfire ranges. For full HD digital NV kit, such as the PARDs, Pulsar N455, Yukon N470, ATN X Sight and Sightmark Wraith, I’d recommend a VCSEL.

Although for non-FAC air rifle ranges, a good quality LED-based model should be OK. But for FAC air, rimfire and centrefire ranges, a VCSEL is pretty much the only game in town.

There are still a few Laser Pointer-types available, including LaserLuchs and the N1000 series from The Night Vision Store. There are many LED-based illuminators available, mostly based on the Osram Oslon black LED (SFH4715AS). Most use lenses placed in front of the LED, which can move towards and away from the source, to adjust the beam between spot and flood. Larger lenses give more range because they catch more of the light and concentrate it into a narrower beam. The T-series illuminators are very popular and a T67 (67mm diameter lens) will illuminate to a greater range than a T50 (50mm diameter lens).

There are fewer VCSEL-based IR illuminators, but the number is steadily increasing. The most common are the Sirius XTL from IRlightbuilds (my personal favourite because it has an excellent diffuser), the Solaris SRX, Blacksun Dark Engine and a budget offering from Precision Night Vision, which is excellent value for money. It should be noted that of the full HD NV equipment available, only the PARD007 and PARD008 have onboard VCSEL illuminators, which provide more than enough illumination for air rifle and rimfire ranges.

Bruce and Russ Douglas have worked together to produce a unique series of (three) IR Safety videos, available on Russ’ channel: www.youtube.com/c/RussDouglas222