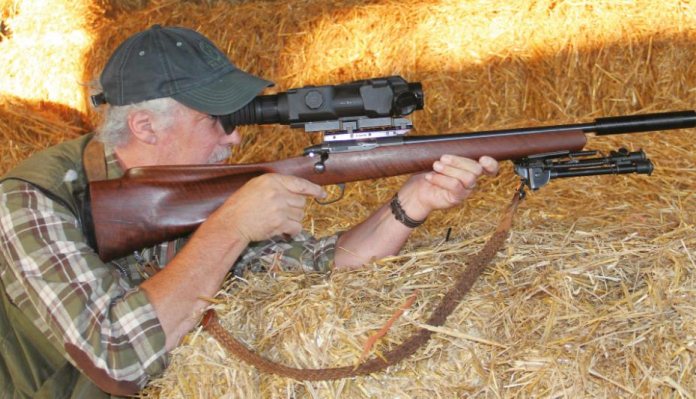 I use a Pulsar Trail thermal weapon sight and it has literally transformed the way I look at the farmlands I hunt over. Thermals are expensive, but Pulsars new version of the Apex has two options; both just above the £3000 mark.

Their LRF XQ models are available as standard with a laser range finder (LRF) fitted and traditional, Weaver-type mounting and are very easy to use. There are two models the XQ 38 and XQ 50 that both have a frame rate of 50 Hertz (Hz) for clear images magnification ranges of 2.1x and 2.8x optical respectively increased with digital zoom. As with their Trail, it can be removed and used as a viewing device and this is what I primarily use it for.

Thermals are here to stay, and Pulsar are at the top of pile with regards detection ranges and reliability in this price range.

I like the size of the Apex, it’s compact and lightweight too at 335 x 110 x 75mm, weighing 750 grams so does not feel out of place on a lightweight 22 rimfire. Its twin, Weaver-type mounts are best suited to a full-length scope rail, as it makes it easier to get the sight positioned correctly. The body is high impact polymer that makes it shock proof for rough handling as it is for heavy recoiling cartridges and has an overall matt black finish, however a camo finish would be nice!

Both XQ models are fully waterproof with an IPX7 rating and can be used between -25 and + 50°. The thermal sensor is a 384x288 pixel unit with 17ìm sensitivity, which is upgraded from the older model to increase detection range. This realistically gives a useable range of 1300 metres for detection, which is more than good enough, all you need is one bright pixel to show a warm object is there. The image is further improved with the 50 Hz frame or refresh rate which means a clear image even if you move the Apex from side to side quickly, so no slurring/drag effect of the image.

The viewfinder is equally good, being an AMOLED screen with a 640x480 pixel resolution for a clear and clean, fizz-free image. It is also frost-resistant, adding to the good degree of protection and clear image in all weather conditions.

Magnification-wise and this is something that people always ask about and want too much power in my view. The XQ38 has an optical magnification of 2.1x that can be zoomed, digitally to 8.4x but with degradation of the image. The XQ50 offers 2.8x optical and 11.2X digital. I prefer the XQ38, as it offers a wider field of view (FOV) for easier detection i.e. 9.8° instead of 7.5°.

The focus is easy to adjust with a large collar around the front lens and there is a big lever to this and its grooved edge means a fast and smooth operation, to get the best image possible. The eye piece too has an adjustable ocular to get the TV screen sharp, like the reticle on a conventional scope. Also, on the objective lens you have a hinged, side-folding lens cover that is really handy to keep the crud out.

On the right side is the main control wheel and this has a rotating outer ring that navigates the main menu and the push button centre to activate/select the chosen setting. I find this method better than my menu-in-menu push button control on the Trail. It also allows sighting in the Apex very easily. In fact, you have a ‘freeze zero’ function that allows a shot to be fired and the image frozen and the reticle over laid on the hole, so making it a very fast process.

This works well, and I found it easy to use and shot very few rounds to sight in the Apex to the Sako 22 LR, plus you can also set three zeroing profiles at 15 differing distances. This means three differing guns or ammunition types and 15 zero/trajectory points making the XQ good for any rifle type, with just a change of internal memory of the zero profiles.

On top is the battery compartment that holds two CR123As, it will give a full nights viewing and most of the day too, remember thermal is a 24-hour system. There’s a large, rubberised ON/OFF button that fires up in a few seconds. Behind is a smaller button that calibrates with three modes dependent on reflective nature of the surroundings, you can also set auto or manual calibration in the main menu. The third button is the range finder, push once and the central rectangle appears in the viewer and the second press shows the range. The LRF is on the left side of the body and is powered by the internal batteries, with the option of an external supply.

The LRF has a range of 1000 metres that a weatherproof rating of IPX4 and is accurate between +/- 1 metre, which is pretty good. Actual distance is determined on the reflective nature of the target and climatic conditions obviously.

Features I like are the 10 reticle choices that are digitally set and allows for a finer cross hair for longer range or smaller target, Mil-Dot for hold over after the target has been accurately ranged and dot or thicker patterns for closer close i.e. rat control. You can also have a white or black with a selectable red, green, white or black centre.

A feature that I have been getting used to is the picture-in-picture view. This is a useful addition, as it gives a small picture above the centre of the main image at a magnified rate. Thus, you can get a better detection or clearer image for recognition and also use it as an increased magnification aiming point without digitally increasing the magnification of the whole image. It does come in handy for a quick spot check at distance to determine what you are looking at.

There is also a wireless remote feature and a display off function that powers down the display when the sight has not been active for a while, which means that the glare of the screen does not reflect off your face or clothing to give away your position. It also means a faster start up time when you need it, so nothing is missed.

I fitted the Apex XQ38 to my Sako 22 rimfire and zeroed in with some of the Winchester 42-grain Max sub-sonics at 30 yards, as I tend to keep the ranges short. The sight does not unbalance the rifle and feels no heavier than a conventional scope. We were set up in a barn where rats, squirrels and rabbits feed in and around the area. Testing was done over an intensive period of hot dry weather and in and amongst those hay bales must have been 100°. Funny thing was the thermal was even better in definition, I was expecting all one heat source and undefined images, but the black and white screen gave really sharp, superbly detailed images of the ground in front of me.

With the XQ38’s wide field of view, I did not have to keep moving the Sako; so, no unnecessary movement to spook game. Guess what, no game to spook anyway! Too hot, what there were only emerged from the shade or burrows well after dark. No problem, as that’s where thermal and NV comes into its own, so we stalked the fields; the Apex was excellent for spotting, with roe deer and foxes clearly visible, all off limits but nice to see. I only managed a couple of bunnies at below 50 yards but accurately ranged and was really happy with the way the Apex performed, considering its discounted price to its bigger brother the Trail.

Truthfully, just buy one, you will not regret it, as it will transform your hunting! Expensive, well I don’t think so when you consider the price of German/Austrian scopes these days and with a thermal it is useful day or night. It will also pay for itself in time saved, as you can dismiss barren areas and concentrate on a highly visible heat source and investigate further. It’s Christmas - treat yourself!