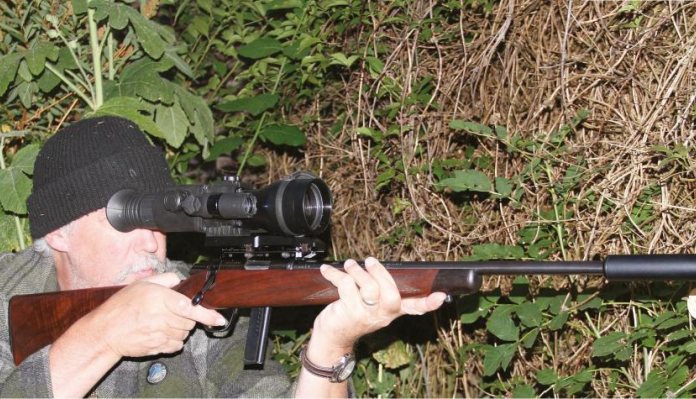 In my series of night vision and thermal optics, certain makes and models come to the fore as the ones I most rate as to the diversity of what they offer the potential buyer. For example, I liked the front-mounted Cobra Blade, distributed by Thomas Jacks last month. But today, we have the new dedicated NV Argus unit. I say this, as some people just want one NV sight dedicated to one rifle and that makes sense and if that’s the case, then the new Argus from Pulsar is a well-equipped Generation 2 + unit.

It mounts using the near universal Weaver rail; so, easy to fit to most rifles or get a base that can be mounted. It also incorporates an infra-red (IR) illuminator and, best of all, a laser range finder. The age-old problems when shooting at night has always been not enough illumination, that’s a given, but range estimation is very tricky. If you use an airgun or rimfire, then getting the distance to target worked out correctly is crucial and critical for a good success rate.

The Argus LRF, as it names suggests, Laser Range Finder, takes away the uncertainty of the range to your quarry, so an accurate shot at night is now possible. Unsurprisingly, it’s a Russian Gen 2 + tube sight that gives a good degree of light sensitivity and clarity and retails at £2,229.95.

The Argus is a typical NV set up with a monocoque construction with a Weaver rail attached beneath. Being an analogue tube design, with a digital aiming system, you combine the excellent light gathering of the Generation 2+ tube, matched with the flexibility of a digital system, to aim and zero it.

I prefer turrets to adjust the aim but the endless possibilities and reticle design and uploadable software updates to the system make it a ‘modern’ design that makes the Argus very appealing. It stands tall, like most NV sights, due to that Weaver base and is 1.2kg in weight, so not too heavy and measures 322 x 111 x 87mm. The aluminium/Dural construction gives it a waterproof ability to IPX7 spec, which means that it can be fully immersed under water! Not sure why you’d want to, but comforting I suppose, if it’s accidently dropped in a pond etc.

It is designed for shockproof use on air guns, rimfires and centre fires up to .375 H&H and has a bikini-type rubber front objective lens cover with attached side straps; so, when opened, is retained, so negating the possibility of losing this all-important protection for any tubed NV scope. You also have the advantage of a Nitrogen-purged optical pathway through the sight, which resists the tendency of fogging when going from hot or cold environments and vice versa. It has an operational temperature range of -25 to + 50º; so, it’s fine for Britain!

Power is supplied by a single CR123A battery that lasts about 50-hours of continuous use and is housed vertically on the left of the sight in the laser range finder housing. To the right, is a removable IR illuminator of 780nm, so a class 1 laser safe device and has a three-step power adjustment for differing ranges or lighting conditions.

You can also adjust the beam width, by twisting the front of the IR housing for a flood or tight focus.

Being menu-led, there are few external adjustments. There is a forward-mounted, large wheel to focus the objective after getting the reticle sharp with the adjustable focus eyepiece and rubber attached shroud to stop extraneous light from entering around your eye. Behind this, are two rubber-covered buttons, the rear is the ON/OFF switch and the one in front is the laser range finder control.

This laser range finder is switched on with one press and this brings up a square box in the view finder and a second press gives a range readout to the right. You have a maximum range ability of 500m and via the menu you can change from a single point range indication to a scan mode with 1m precision.

Add to this the True Horizontal Distance (THD) option that allows a true distance when the elevation or drop changes from shooter to target changes, makes sure you get a true range and therefore an accurate shot. This is displayed on the screen. On the right of the body, is another large wheel with a turn operation and push down set mode. So, you hold down this wheel to enter the menu and then scroll through it with the turn of the wheel and then activate each option with a push down again.

There are a lot of options but here are the main choices. You can set the reticle to differing styles, being digital, which is handy. You have the choice of four patterns, I used the 4a-type for the tests as it best suited my needs and gave a nice open view and a precise aiming point. This is superimposed onto the display and can be adjusted for brightness to suit the image and background for a perfect shot.

Most important, is the zeroing mode. This function is easy to accomplish with the Argus, thankfully for this ‘old fogy’, as I like to keep things simple. You have three zeroing points of impact for three distances to set up, which can be accessed for differing calibres or rifles, or same gun but at different distances.
This can also be set for a differing reticle type as well, so thicker for short range ranges or finer for more precise longer shots, nice.

I am slowly getting to like digital after all!

To zero in, you need to set up a target and shoot at the intended range to get a shot; I would tend to shoot three for a group. Next, press and hold the main wheel and then turn the wheel to get the indicator opposite the zero in symbol and press. Now, an additional crosshair appears on the screen, which is moved vertically (Y axis) for plus or minus 87-clicks and then press the wheel and it switches to the X axis (horizontal) and do the same with a max of plus or minus 63-clicks.

Pulsar recommend zeroing in the dark with the protected cover removed, as a slight shift in perceived zero will occur as I had a small amount only, so wait until dark and then sight in. It’s a very easy system to understand to be honest, even I could do it, but windage adjustment is limited.

I fitted the Argus to my Sako Finnfire and used Winchester’s excellent, Max 42-grain hollow point ammo set up, which is a sweet shooter and good test bed for NV kit. I set the rig up to shoot for a 30 yard zero point, as that’s my comfortable shooting range at night. If the distance to quarry increases, then it’s just a matter of applying good old, eyeball hold over, by the simple expedient of aiming further up the rabbit’s ears to achieve the same head shot at longer ranges!

Now I had the advantage of the Argus’ laser range finder, so I was more confident that the range I thought those bunnies were at was exactly that and not farther away, as usual. Image-wise, I have to say it was clear, better than the Blade, as this is a dedicated design that does not rely on the host day scope. You get a good field of view with the 4x power and 60mm objective lens size. 4x is more than enough in my book, it offers a fizz-free image and just get that cross hair on and squeeze the trigger; don’t over think it, trust in the rifle, ammo and the Argus. I had some great rabbits out to 65 yards, which for me is long for night hunting, but that LRF option I have to say is really worth having.

Worth the money in my book; you bet it is! It combines the image quality of a good Gen2+ tube with that of digital set up and reticle options. The laser range finder is handy, and the zeroing process is straight forward with a very clear sight picture. It sits a little high on a rifle, as all these types of sights tend to do. But it’s compact enough not to effect handling. For those wanting a one stop, NV-dedicated weapons scope from a trusted company, then the new Argus LRF from Thomas Jacks has to be it.