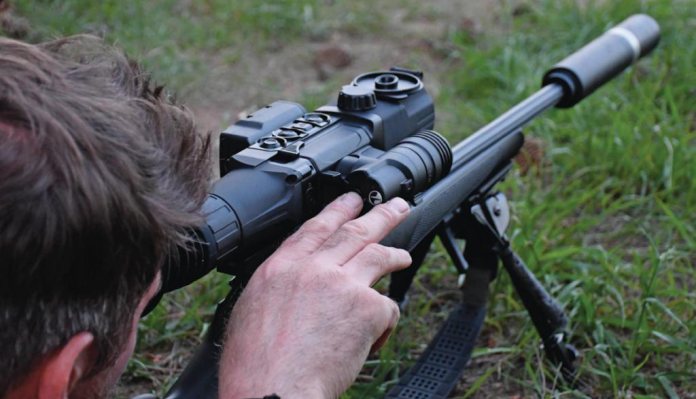 Shooting at night is no longer the mystery it used to be with the aid of thermal and digital infrared (I.R.) technology, but the final range to target question still applies after dark. With night vision (NV) devices promising more stored zeroing distances, APP based ballistic calculators and promises of greater sensor sensitivity to reach out further in the dark, it’s good to see this final issue has been addressed. Pulsar has now added a laser rangefinder (LRF) to the popular Digisight range.

The core Digisight N450 remains the same as its non-LRF brother but the battery now holds a bayonet clamp for the on-board I.R. illuminator. This visually balances the bulk of the dual-lens LRF addition on the left side of the tube. The illuminator includes a single switch on the rear, for three power settings and off. The beam cannot be focussed to alter the spot size but can be locked/unlocked with a lever allowing the lens to be coaxially adjusted to coincide with your point of aim.

The electronic setup on the scope is almost identical to the rest of the Pulsar range, now with multiple gun memories and ten zeroing distances for each. The moving reticle is steered across the X and Y-axis of the image to coincide with your point of impact on the target. When using the base 4.5x optical magnification, each click provides 10mm of movement at 100m.

For ultimate precision, if you increase the mag digitally to 9x, this becomes 5mm while 18x gives a 2.5mm click value for really precise primary zero setup. This is important if you plan to shoot at longer ranges.

Pulsar offers a freeze frame function, which is designed to help the user to achieve zero. However, bullet holes are tricky to see in daylight but it’s worth experimenting with target styles to get the best image contrast. It’s probably best to avoid bright sunlight, as it over-exposes the image, even with the lens cap closed and 10mm aperture.

Ten reticle styles are available with nine colour options and adjustable brightness levels. This means you can tailor the internal image for the exact viewing contrast you want on your aimpoint after dark, a definite benefit depending on the quarry you are after.

All the menus are controlled with four buttons in a linear layout on top of the scope’s body with a combination of short or longer presses. The quickstart instruction book supplied, along with a USB charger and cordura case is OK for the basics, but it is small and not that great in my opinion, missing quite a lot of helpful detail (like the click value!) so you have to look online for more details if you find yourself struggling.

The whole setup is IPX7 waterproof which I think is mandatory in the UK. I found adjusting the image screen focus easy, using the collar on the rear of the tube. The concertina eyecup helps lock out unwanted light.

I am continually finding the quality of Pulsar’s ocular lenses is improving, giving a better flat focussing field of view and definition across the spacious internal screen. The Picture in Picture (PIP) function is still present and for more subtle reasons, now more of a benefit than ever, more on that later. The Digisight still supports video and sound recording, with a micro USB port to the left rear. The wi-fi functionality enables the Stream Vision app on a phone or tablet to share the view.

The image focus is controlled using a 24mm dial located on top, towards the objective. This supposedly provides a mechanical optical focus of the incoming image, but you can’t feel any internal movement unlike some units, namely the Sightmark Wraith, which uses an ‘old fashioned’ adjustable objective lens. The Digisight doesn’t seem to snap in and out of clear image focus quite as easily, quickly or with such definition. Use in daylight is limited due to the black and white image which although giving great 50Hz fluid motion in the picture, has minimal image contrast, meaning movement is what gathers attention first.

A more powerful I.R. is not all about viewing range to target, it’s often about picking up the eyeshine from quarry, especially when partially obscured in longer foliage. This Digisight’s onboard illuminator, although detachable and in the 850nm wavelength gives capable viewing to approximately 175m. In short grass paddocks, depending on moonlight conditions, this is more likely 125m maximum, certainly for rabbits, in 3” grass. Foxes are easier, but the eyeshine is not ‘popping’ in the same way and I feel the Digisight LRF would benefit from the additional I.R. bracket we have all come to depend on.

Of course, you can mount the I.R. to the rifle itself but not everyone uses a gun with multiple Picatinny mounting points for such additions.

The rangefinder is brought into operation with a single press of the front control button, it springs immediately to life with a small box located in the centre of the screen. Place this over what you want to range and press it again for a readout in metres or yards (selected during setup). This sits slightly left of your aiming reticle’s previous position. If you have PIP activated then the aiming reticle is still shown. Otherwise, the rangefinder reticle disappears after a few seconds along with range and inclination angle readout. The aiming reticle then reappears for you to take your calculated shot in full possession of all the facts!

It’s interesting to note that at night, you see the laser beam spot emitted from the LRF and it’s quite handy to position it accurately on target for a trustworthy reading. You will also note the spot size, intensity and exact beam position varies slightly due to the visual parallax change due to its side-mounted position, but this doesn’t seem to cause an issue. Pulsar has kept lateral displacement to a minimum. Some NV rangefinders I have tried as additional add-ons are quite laughable in their parallax shift from closer to long distances, almost unusable in fact, so I applaud Pulsar for keeping their game heads on and delivering the goods.

If you use a long hold on the front button, it activates scan mode with updated readouts generated every second. Lastly, if the distance requires significant ballistic compensation rather than just aim-off using the reticle, pressing on the central mode button (rather than a long hold to bring up the setup menus) initiates a choice of ten zero ranges you may have set up in the memory with corresponding reticle shift. This quick press menu also controls magnification (full screen or PIP) as well as brightness and contrast. I limited myself to 8x to avoid too much image pixelation from the digital zoom.

I like the rangefinder which works well and it removes the last question mark before taking a shot. However, given the lack of additional I.R. architecture, the fundamentally empowering LRF capability of the scope is limited when compared to the non-LRF version, which retains it’s left side Picatinny mount. It’s good to see continued Pulsar evolution with user friendly external profile and noticeable improvements in ocular lens capability, giving a broader focal eyebox. In use I found the reach of the rangefinder to be less than advertised, although I was using it on animals and foliage, not hard-faced structures that bounce the laser back more strongly, so I wasn’t disappointed. The +/- 1m accuracy as stated was dependable out to around 600m in poor light which is ironically, the likeliest condition to get strong readings from any unit due to less light pollution.

No additional I.R. mounting position seems odd as Pulsar clearly thought it was a beneficial factor previously, yet somehow, not now there is effectively a longerrange capability with a rangefinder? I’m told they will be introducing an additional I.R. mount for the Digisight LRF and it seems that will tie in well with deepening the centrefire capabilities of this continually, positively evolving unit. I would like a proper instruction manual, I know how to set these up after completing it tens of times but new users would certainly appreciate it rather than simultaneously juggling a smartphone with online instructions.