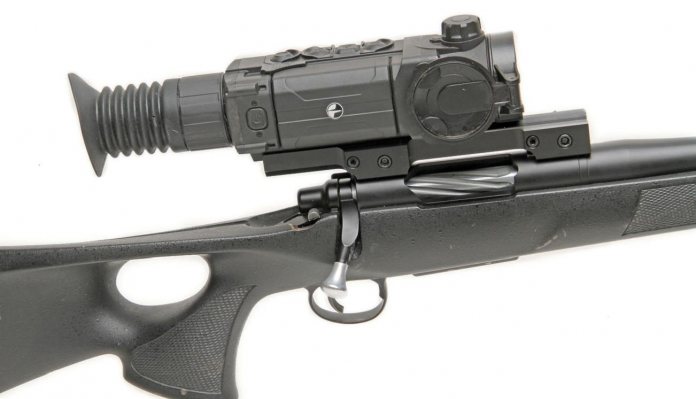 Back in February, after a long-term test with Pulsar’s Trail thermal weapon sight, I was left gob smacked at its performance. Thermal imagers have transformed the way we look, literally, at the game fields and what lives within them. Some say its cheating, as no living, i.e. warm bodied object, can avoid its penetrating gaze!

Though technology is rising in this field, prices seem to be coming down a little too, so now is a good time to consider a thermal device. In most cases downward, so making it even more viable to spend your hardearned cash on a thermal that now cost the same as a high-end scope.

The Pulsar Trial is a new breed of thermal sight; as with the Apex, this model is a thermal weapon sight, so does double duty as a spotter and a sight. On test, is the new Trail XP38 that offers a superb level of detection and clarity at a price of £3769.95.

There are 34 pages of instructions in the manual, so I will only go through the salient points, otherwise it will become a brochure. I like the wider field of view (FOV) given by its 38mm lens compared to the XP50’s 50mm version! But that’s me, as I shoot a lot of woods where a wide FOV is more important than longer range.

The AMOLED display is 640x480 resolution and has a nice greenish tinge, which really gives good contrast to the image. You have a technical maximum range of a detected 1.7m tall object of 1476m, and a useful 5m minimum close-up distance, so great for rats in barns. Nice, is the black and white-hot options, which give two different colours to switch between to really define the image.

The Li-ion battery has a quoted 8-hour run time, and it does, plus a 5v, USB, external supply can be used also. As with the forward-mounted Pulsar F155 you also have a Wi-fi connection capability to stream footage and an on board 8 gb memory to store video and pictures.

It’s easy to forget that a thermal needs no light for detection, so is just as good, day or night! The image is dependent on the local temperatures to define a gradient difference between objects. To make it easier, you have three detection modes of City, Forest and Identification, to fine- tune the image. Importantly, you have three calibration settings; Manual, Semi-automatic and automatic, which updates to the current temperatures and adjusts the image accordingly.

There’s also a choice of 13 differing reticles and illumination, but I stuck to the single dot, as I found this best. You have 10 differing zero ranges for each rifle profile used, so a myriad of differing calibres and distances can be set by using the main menu in menu settings. There is a 3-axis accelerometer, gyroscope and magnetometer that allow a horizontal and tilt correction, as well as a set up for auto shut off when tilted.

Defective pixel repair mode and quick zero and one shot zero functions as well as a stadia range finder function. All these functions are accessed via the four, large, waterproof buttons that lie along the top of the body casing, with the large focus wheel, ON/OFF switch to the right-hand side and USB port to the left.

That’s just the start, as there are many set ups within set ups, as well as contrast, brightness, reticle colour- you name it. It’s all covered in the manual, read it and then read it again; trust me!

I have used the Trail on everything from rimfires up to 308s and custom calibres. Due to its ease of mounting and dismounting, you can easily swap between rifles, because the internal digital wizardry allows several zero and different gun options that can be saved and accessed when the gun and calibre has changed.

I have to admit, I am a bit of a technophobe when it comes to digital gadgetry, which may sound odd, seeing as I am testing this! But I much prefer dials and buttons to push, than endless, ‘menu-inmenu’ set ups. This is probably my only bug bear with the Trail, as setting up as a rifle sight it needs quite a few attempts to execute and if you have not re-zeroed recently you forget the procedure and must go back to the beginning. It might well be my age, but sometimes I think the manufactures perhaps give too many options!

This aside performance is quite breath taking.

Take a deep breath and take the plunge, as £3769.95 is a lot but the performance and time saved walking in the wrong area, safety due to spotting dog walkers and just pure enjoyment of observing game undetected is worth it in my view. I have genuinely been blown away with the XP38 Trail’s performance and it is a game changer in all respects and will provoke comment from traditionalists, I am sure. As a pure tool for viewing, counting, detection, safety and security it’s superb, the fact that you can use it as a weapon sight as well is a bonus!