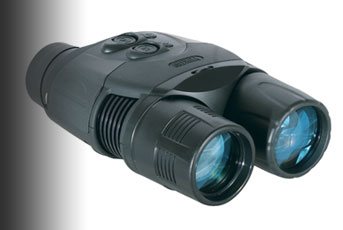 Various companies have tried using digital technology for nightvision optics as an alternative to the traditional starlight systems which use image intensifiers. The image generated in the latter case is dictated by the generation of the tube used. However, advances in technology have at last brought us to a point where digital NV isn’t talked about expectantly; but is now a reality!
Yukon has been leaders in this field and what I have here is their Ranger Pro 5 X 42 and it’s something special.

The Ranger Pro measures 6.7 x 4.6 x 3” and weighs 28 oz including 6 X AA batteries. It can also be run from a vehicle’s 12V system or a mains supply; both adaptors are included in this most comprehensive package. Also in there are a spare battery carrier for a quick change in the field, lens cloth, carry case, adjustable neck strap and even a CD guide. Also as the unit can be linked to a monitor or a digital recording device, a short lead is supplied for the Video out connection point. Incidentally, Thomas Jacks Ltd are supplying an optional MPR (Mobile Player/Recorder) for use with the unit so I can assess the results for a long term test period – I’ll keep you informed on this at a later date.

Though based on the company’s popular Ranger 5 X 42, the ‘Pro’ version uses an enhanced CCD sensor. This offers improved resolution and a maximum usable range that is approximately double that of its cheaper sibling.

It has built-in Sumlight™ software that automatically adjusts the image for changes in lighting conditions. Dual Infrared (IR) Illuminators – one being for short-range use and the other is a high power long-range ‘covert’ IR Illuminator. It offers the closest digital NV performance to a Gen 2 image intensifier in both sharpness and brightness and as an extra bonus can’t be damaged in normal lighting conditions – even car headlights and streetlights will not blow it out.

That may sound like BS PR, but every word of it is true and I defy any night shooter not to be impressed by this kit. The operating buttons are rubberised like the outer shell of the device. Positioned on the top they’re ideally sited for one-handed operation, the rear switch turning the unit on while the forward one engages the IR. Note also the plus and minus symbols that help fine tune the sight picture as well as the forward and centrally positioned, serrated edge brightness control dial.

Focusing requires you to turn the left hand objective lens housing which gives a monochrome image due to the unit being digital. The viewing range is specified as being capable of 600m which I can’t argue. Image clarity is astonishing; on the darkest night I’ve easily observed rabbits out to 200 yards and fox size targets are clearly spotted too, if crossing open ground out to and above 500 yards; depending on conditions.

For sure identification, in other words you’re not tracking a cat or dog, the experienced night shooter should be able to discern that it is a fox out to approximately 400 yards depending on the terrain. This is astonishing considering the price and the fact it’s so compact and is going to be as useful to those lamping with stealth as it is those using NV Scopes. With this in your armory you’re not having to use a lamp as much and definitely not needing to hoist an NV- scoped up rifle to your shoulder for a scan around.

There have been a few examples of NV equipment that have used digital technology; some have been acceptable even good but with limited range ability. Personally I have not come across anything that even comes close to the Yukon Digital NV 5 X 42 Ranger in terms of ability!

Quite frankly the performance is astounding and for once this hi-tech technology doesn’t cost the earth.