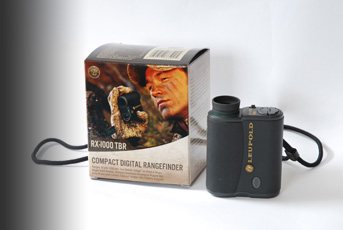 As a company Leupold is always pushing the envelope. A few years ago they brought out their RX series of laser rangefinders. Hand-held and compact they offered four models, which covered the basic line of sight unit to the all singing, dancing that included inclination angle shooting and even a compass, plus many other options.

However, I did find the higher spec models a little over complicated with far too much reticule choice and a curious sub-150-yard setting. This made for quite a big menue to navigate through, though there was no denying they did the job and the usefulness of their inclination angle facility.

Though the original RX range is still on the books, this year Leupold launched the RX-1000, which is a true compact. They also took a long hard look at functions and trimmed down/refined them to make a simpler and more practical design. With a rubber-covered, aluminium alloy chassis there are two models available the 1000 and the 1000 TBR (true ballistic range). I have the latter on test and if angled shots are what you do; these are your best bet.

The spec is 6x22, dimensions - 3.8x2.8x1.3” and weight 7.8oz. Power is from a single CR2-battery (included) as is a lanyard. This package is compact and easily fits into a small pocket and allows one-handed operation. All lenses are multi-coated and show a clear and crisp image, at the rear the eye piece features a fold-down rubber cup and focus offers positive click stops. Operating range is 10 to 1000-yards/meters, as always depending on the reflectivity/colour of the target. Leupold tells us that it should be able to ping (range) deer and tree-sized targets up to 500/600-yards. The unit is good for 2000-pings from one cell. Included is a Cordura belt pouch and a choice of finishes; black/grey or Mossy oak camo finish (TBR version only).

Controls consist of a POWER button (on top) which fires up the unit with the first push then ranges with the second. On the left is MODE that allows you to cruise the menue, with POWER used to select options. Primary functions are: bow or rifle groups, reticule choice offers a plus point (small central cross) and duplex with or without plus point inserted. Plus yards or metres, 3-level reticule brightness, battery indicator and hold over figures in MOA, inches or centimetres. There’s also a last target indicator and a scan function that allows you to range multiple targets or follow just one.

The view consists of the reticule in the middle with what you have selected top and bottom, such as true ballistic range (TBR) etc. It also shows your notation (yards or meters) and the angle at which you are viewing the target. There are two range read-outs; below is the line of sight (LOS), which is the distance from the rangefinder to the target. Above is the TBR or corrected range for an angled shot, which will also indicate whether you need to hold high or low, which is useful in the heat of the moment. The only thing to remember is; which read-out you are working off.

Angle of the Dangle

Taking an example from the manual – a 270 Win firing a 130-grain bullet at 3050 fps up a 40° incline at an LOS range of 400-yards. Obviously a 400-yard hold would have you shooting over the top due to the nature of how a bullet is affected less by gravity on an angled shot. TBR in conjunction with Leupold’s Ballistic Aiming System (BAS) will automatically calculate that. For this scenario you need to be taking a 367-yard hold to hit the mark. Conversely you could just use the angle read out and do your own calculation on the hold over.

The BAS is used by Leupold on their reticules and works on a number of different calibres and bullet weight/velocities. These fall into seven, different categories (A, B, C, AB, AC, BC & ABC) and at given zero ranges, normally 200 and 300-yards will give an accurate hold over figure. All you need to do is pick the right group and input it into the RX-1000. Leupold says that TBR generally gives less than 2.5” error on hold over out to 500-yards. However, do not forget that figures will and do vary gun to gun and ammo type to ammo type! So it’s better to practice to see where your particular rifle/cartridge combo fits into BAS.

I use a 6.5 Swedish and Leupold indicates a 140-grain bullet at 2630 fps, which is not short of what my reload is doing at 2657 fps. This then falls into category AC given I set up for a 200-yard zero. With this data factored in I can ping the target and the RX-1000 will give me a hold over figure I can apply to my scope in either LOS or TBR modes.

Compared to my old RX-III I found the RX-1000 far easier to use and much preferred the simpler menu. Visually Leupold use what they call an OLED display, which I found slightly brighter/crisper than the RX-IIIs. This helps when placing the reticule in various lighting and cover/terrain situations. Though in really bright light the outer arms of the duplex do fade a little; even at max illumination. This however, did not occur with the plus-point in any conditions! The display is on for eight seconds and if you swing onto another target in that time and press again the new one is automatically acquired. Or stay pressed and scan.

In use the RX-1000 is light, handy and sits easily in the hand; though as ever with any rangefinder you need to be steady on aim to ensure you have pinged your intended target. This is even more critical with a small design such as this. Used as I am to the size and stability of my Leicas BRFs (binocular range finder) I did have to work a bit harder initially to stay on target.

We are told that the unit gives +/- 1-yard/metre @ 100 yards/metres, which it does. Pushing the range and using my Leicas as a control showed the RX to be either dead on or within 1-2 yards, so more than good enough. For such a small objective the field of view is very good, as is lower light operation. Leupold says it’s capable out to 500-yards on deer-sized targets, which I generally found to be the case; given the caveat of holding steady. But for your average British stalker that’s more than enough!

Truth is with any range finding device you A – must believe what it tells you and B – practice with it so you are hitting the mark and understanding and utilising the data it provides to the maximum.

Though I love my Leicas, the RX-1000 is well worth a look as it’s light, compact and does the job. Factor in TBR and BAS, plus all the other features and you have a sophisticated yet practical rangefinder in a neat and efficient package with much to offer the serious hunter.