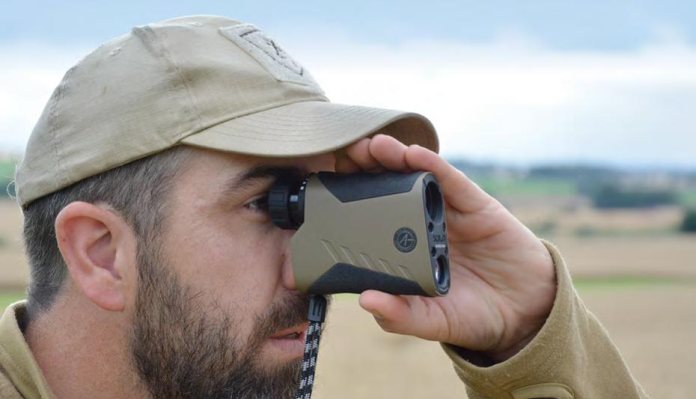 The Sig Sauer Kilo 2400ABS is not just any old laser rangefinder, it incorporates the highly respected Applied Ballistics System to calculate and display firing solutions for shots at longer ranges.

Applied Ballistics is used in apps/tools elsewhere and is a trusted long-range companion for amateurs and professionals alike. The Kilo will store multiple gun profiles that are all built and transferred using Android or iPhone Bluetooth compatibility (which is thankfully only needed to build and transfer your personal ballistics), but can also be used as a secondary element to the product by displaying real time data in ‘Head Up Display’ mode. This isn’t a feature I’m bursting for, unless Bluetooth connectivity is absolutely guaranteed and as a simple fact, the Kilo is supplied with three CR2 batteries. This indicates even Sig Sauer know Bluetooth is fairly energy greedy and most people know battery life on smartphones needs to be used with caution and not relied upon indefinitely, with the screen lit up for long periods.

Four profiles can be saved onto the Kilo with 100 backed up on the App with familiar variables like muzzle velocity, ballistic coefficient, output values etc., some of which can be reverse calculated from known, onrange data of others. Applied Ballistics developed their own B.C. library, which is publicly available, using Doppler radars and although not fundamental for shorter ranges, makes long range first round hits more likely, with honest truing of your exact ballistics curve more factual, it’s one less variable to worry about as manufacturer led data is not always reliable or kept updated.

The use of DSF or ‘drop scale factor’ assists truing of results after actual test on target and I have full confidence in AB, which gave firing solutions better matching my real-world ballistics, when compared to some other devices I use regularly that do not use AB. Custom Drag Models have proven themselves elsewhere to me to be more accurate than standardised G1/ G7 BCs but for actual hunting needs, G1 still cuts the mustard for realistic hunting ranges. For the target and ELR shooters, Coriolis, aerodynamic jump and spin drift become of interest, with the ability of the KILO to compensate for temperature/ pressure may be of specific interest to travelling hunters. The 4Hz refresh rate of the LightWave™ DSP Technology for rangefinding is noticeably effective when you hold down the button for HyperScan™ mode. As you drift across a grassy field for example, the faster refresh rate helps to pick out and pinpoint small targets or quarry like a Rabbits or Magpies, for longer range varminting.

Lumatic™ OLED Display automatic adjusts brightness of the customisable reticle; which, you can change the look of by adding/removing hash marks of the milling/aim off-grid. I was impressed with the sharply defined red aiming reticle that never dazzled and blended smoothly with the ambient conditions quickly to ensure you retained the fullest possible low light capability from your own eyes. Shot inclination, up or downhill, is compensated for as well as more complex matters, like target speed, which may be helpful if you engage in some real tough tactical comps with longer range moving targets that requires the app to program. The weather flow meter plugs into your phone’s audio jack for wind speed and direction that can also be input and run for immediate real-time application to range and direction settings. A bracket is supplied to slot the Kilo into and screw onto the ¼-inch threaded spigot of your tripod.

Although this functionality is great, it does carry one weak link in the chain and that is your ability to keep the phone connected. I used the unit predominantly in separate formats, as phone batteries last far less time than my days out shooting. The ability to keep up to date with new factors and program with the phone is a godsend in more controlled conditions (near a charger), it’s far easier to intuitively build the firearms profiles without in-field distractions and extensive button pressing sequences within menus. Sadly, the processing is done on the Kilo itself and the app on your phone will not work unless connected. This might not seem to matter but being able to study ballistic data before live firing does help to spot and iron out any likely glitches but, it’s easy to make changes in real time providing signal is retained.
Make sure you disable or lengthen the sleep timer on your phone’s screen, as when it goes to sleep, it takes a few critical moments to regain Bluetooth connection, by which time a shot opportunity may have passed.

Fitting batteries is easy, with a fold up flap on the single lower battery door, so no coin slot and corresponding coin are needed. The eyecup rotates to extend eye relief an extra 8mm, with a tactile rubber cup that seats well into your orbital socket, stopping extraneous light entering. The dioptre focus collar has a tab in the centre and is quite stiff to turn but theoretically only needs doing once and certainly won’t get nudged and drift. I did find I needed to open the battery compartment twice just to ‘power cycle’ the Kilo when it seemed to go dead. Doing this brought it back to life and like all electronics, even though solid state, it did appear to crash on those two occasions.

The Kilo is expensive and the whole arena of rangefinders, wind meters, ballistic computers and optics are covered by several manufacturers, yet none cover all elements entirely. Something like a Leica HD-B binocular covers binos, range and ballistics, a Kestrel Elite covers Ballistics with no phone required but no rangefinder, the Kilo covers Range and ballistics but with the wind being more of a secondary addition relying on your phone and limited ‘spotter’ capability for your wing man. There is no magic solution to cover all bases and most serious long-range shooters will look at the budget and the number of items they need to physically carry and operate if they want to cover all these factors in the field, and not the front room!

The Sig Sauer 2400ABS is a very worthy attempt at this market but to me, there is a very fine line between the compromises of carrying extra items or relying on smartphone connectivity and I admit, I prefer standalone tools with this just pricing itself just a little too high for a ‘rangefinder with ballistics’.

The laser is powerful and I could get pings on a treeline out as far as 1506-metres, with accurate repeat range readings but never any further. Getting a return of the laser pulse did require a bit of scanning at that range to ensure the beam divergence with regard to the reticle’s aim was ensured to get a return.

Out to 8/900-metres, the unit was 100% reliable and very fast compared to my RF Binos with a ballistic readout displayed 3-seconds from the initial pulse. Reading the clear alphanumeric display was also quicker than my Binos saving fractions of a second when timing can be critical.

With 7x magnification and such a small overall size and weight, it is palm-sized but correspondingly for extreme long distances is better setup using the included mounting support on a tripod. Although only a 25mm objective lens, the image was bright enough and unlike cheaper rangefinders that may look the same, based on a similar chassis/casing, the optical quality was far higher, with a crisp clear colouration and none of the grey or yellow hues they seem to project.

The aiming circle can be altered to project vertical and later hash markers too but at long range with only 7x mag, picking out even a man-sized figure 11 target needs the scan mode employed with the range button held down to ‘pop’ the target out of the background. If an object is enclosed by cover at differing ranges it is trickier still to range precisely, shooting the laser past obstructions. Don’t forget that the long depth of field that enables crisp focus without any mechanical optical adjustment does imply smaller apertures within, so you are never going to get magical low light performance. This thankfully goes hand in hand with the fact you are also hopefully unlikely to be shooting at unknown ranges in such low light conditions. You get a very enthusiastic 0.1-metre accuracy displayed; it does seem a little pointless given the margin of error when pinging your own exact target. I could get very fast accurate measurements of reflective objects out to 1000-metres but again, target size and surface are critical.

There are some seriously high-end rangefinders like the Vectronix Terrapin out there for extreme long range (ELR) shooting and although Sig Sauer have made a very capable product in the Kilo 2400 AB, it is not ideal for that market. But, it is very fast and accurate in the intermediate range game but I feel it has a definite usage ceiling at 1000-1100-metres in full daylight, because few us are likely to be ranging large hard targets with reflective surfaces to push the device to its intended 2400-yard maximum range. Dimmer conditions did improve on this perhaps another 100-metres, as there is always less light interference but you have to temper that against lower visibility of the target through the small objective lens. As always, smart phone connectivity has its pros and cons. For fixed position shooting it was nice to be able to use the head up display on the iPhone but I didn’t feel this added to the unit’s capability and wind reading is still always the key matter for long range and where I find a range finding binocular, with greater field of view, detail and more relaxed viewing of conditions like mirage far out on into the flight path has a definite benefit over any wind reading at the firing point, for anything other than initial comparisons.

After using several options for shooting at long range with measurement and ballistic calculation capability, there is no magic answer to which product is best. None do everything and you need to think carefully about the features you need and the number of tools you want to carry.