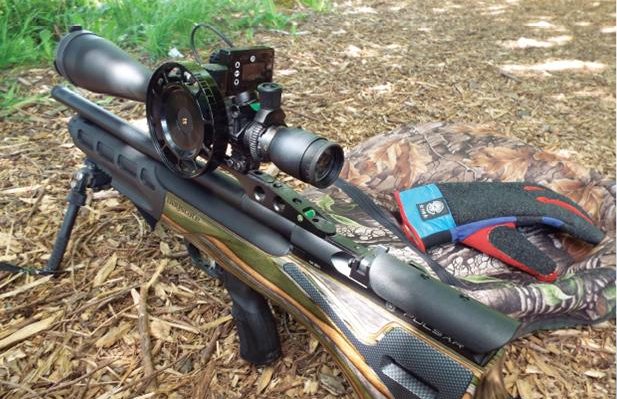 No one can accuse Rowan Engineering of rushing this product on to the target scene. At least two years of development have gone into this that I know of. I first clapped eyes on it at the 2015 Shooting Show where it was close to the finished item, but still being tweaked and certified to allow production and sale. Now, it’s finally available!

Dave and Derek Rose who own Rowan Engineering first discussed the possibilities of a digital info wheel eight years ago when the cost of producing it would have been prohibitive. A few years’ later, costs had dropped sufficiently to allow them to start work on a system originally designed to show just range distance via the sidewheel but with the advancement of the small, power efficient micro processor a lot more was possible!

The first prototype was shown at the 2014 British Shooting Show and all PCB manufacture and programming was done in house at Rowan. I first saw it in 2015 when it was very nearly complete and really fancied using one once it was on the market. Several of the prototype units were used in the GP series by shooters to iron out any potential problems before it became available at this year’s British Shooting Show. I was Rowan’s first customer and it now sits on top of my Daystate Pulsar to complete a very high tech piece of equipment. For readers looking for a digital rangefinder this is NOT it, please keep that in mind!

It’s simply an alternative way of displaying the range data you achieve using your FT scope to focus the target using a conventional sidewheel and noting the distance! However, instead of having a physical `pointer` that lines up with the user’s pre-set marks on the wheel, the Digi-wheel transfers information input by the position of the sidewheel to a digital screen.

The skill of using the wheel accurately and consistently still applies; otherwise the displayed results will be incorrect. So, it’s not a quick fix solution for those too lazy to learn the skills required for FT competition!

Well, apart from providing the focused distance much more precisely, for every 2mm of movement on the wheel, the unit is able to provide much more information to the shooter. For instance, temperature changes which can be set to check at shorter or longer intervals, as little as 10 seconds if required. This info is shown as a bar graph, which records the last 30 minutes of temperature before beginning again. This info can then be used in conjunction with the settings on the range wheel, which has a low and high temp setting. By the press of a button the shooter can transfer from summer to winter settings or have the unit automatically adjust subject to the correct parameters being input.

Another handy inclusion is the wind direction indicator. Used in conjunction with the `windicator` on the rifle, it records the direction of the prevailing wind, input by the shooter before starting the course. Simply point the rifle into the wind and store the info. A circle showing a pointer will now indicate the prevailing wind direction. Very useful on twisty, winding courses where sense of direction becomes harder to evaluate, but there’s much more!

As we all know, uphill/downhill shots always evoke conversation as to hold under (as opposed to holdover) and usually involve a bit of guesswork. Elevation compensation is there to take out the guesswork and depending on the angle of the rifle from the level position it re-calculates the click values needed for point of impact and displays the corrected values, overriding the shooter’s set ones. The actual angle is also displayed along with the impact point differential. For example: Range=44.3yds, Inclination angle = 22°, Elevation compensation= 14mm

The main range clicks will indicate the appropriate value to achieve P.O.I.

This facility can be switched off if required and I must admit that it takes a giant leap of confidence to follow the info on the screen after years of `aiming on` and achieving good results. Personally I have mine switched off until such time that I can evaluate its performance properly under set conditions. Something I have not had time for as yet.

Also no more relying on Happy Harry behind you with the watch as he chats away to his mate. The screen has a timer which counts down from a pre-set time at the press of a button. 130-seconds being the default. Probably the most controversial aid is the Cant Indicator, which takes the form of a series of colors from an L.E.D. top left of the screen. Green, Amber and Red indicating straight, slight, and severe angles. It is adjustable for sensitivity and can be switched off altogether if required. I believe that the WFTA have banned the use of the digi wheel in their sanctioned competitions on the strength of this digital cant indicator. As spirit levels are allowed I cannot see the reasoning behind it, particularly as the aid can be switched off. Try that with a spirit level!

There are many more tricks that the Dig-Wheel can perform including; Focus Mode - which allows five ranging attempts before giving the average range of the sequence. This shows how consistently the target range is acquired and helps the shooter to perfect his technique. Steady Mode - Shows how steady the rifle is being held. There are other tricks the Digi Wheel can perform but the above list covers the main menus. As we can see, the change from mechanical to digital readout gives us many more options in one package.

The wheel supplied is 110mm in diameter and has a strip of magnetic tape running around the inside for the sensor unit. It has a pretty good universal fitting system involving adjustable jaws depending on the scope. Rowan can modify other wheels should the consumer prefer.

The Sensor unit mounts onto the scope tube via a clamp and is adjusted so that the sensing tip is in close proximity to the magnetic tape. This is probably the fiddliest bit of the set up and the ‘run-out’ of the wheel on its axis must be within set tolerances to allow correct operation. However, once set it is very robust and stays put.

The lead from the sensor plugs into the screen/computer unit, which also incorporates the CR123 Lithium battery that also clamps onto the scope tube. Once all this stuff is bolted on to the rifle, the set up process can begin. As you can imagine, there are a lot of parameters that need inputting before using the Digi-Wheel on a course of targets.

There are five important steps to the set up process, once the Digi-Wheel package is fully mounted. Information must be loaded into the on board computer in a sequence requiring, in my case, reading glasses, handbook, screen unit and cup of tea! The first three stages are done indoors without lifting the rifle:

1. Set the direction of focus wheel; some run clockwise, some anticlockwise.

3. Set the ranges via a bar graph on screen. Input the ranges at which you wish to calibrate the sidewheel. For example, 10yds being closest and OVER 55yds the furthest. 57 will do but I recommend 60. Everything in between is optional with up to a dozen ranges available. It is really only necessary to input 4 or 5 key distances and the computer will fill in the rest. At this stage we are still in the house and sat comfortably pushing buttons!

4. Now we go outside and actually calibrate the sidewheel to the distances that were input at step three. Once again a bar graph is shown on screen. Obviously some time and care is required at this step, as the unit records wheel position every 2mm.

5. Having set scope parameters in step 2, now the click values are entered into the unit via another on-screen bar graph and clever image of the scope turret. Talk about high tech! The unit makes a very good job of filling in the gaps between set ranges and no further adjustment is necessary.

Now I’m knocking on a bit and although I use computers in a general sense, my capacity for digesting new technology is fading by the week. Despite this, set up really was a doddle thanks to the excellent handbook supplied by Rowan Engineering; they really haven’t missed a trick!

HOW WELL DOES IT WORK?

I have been using it for several weeks now and apart from an initial rogue unit, which was promptly replaced as it was eating batteries, everything is working faultlessly. Sit down, switch it on and revolve the sidewheel fully back to minimum distance then hit the start button. There is the screen showing distance, required clicks, timer, cant if switched on, and shooting angle if activated. I also have the option of showing just range or just click value, or both. It also has a sleep mode, which is adjustable, so any hold ups between lanes will see the unit switch off until the sidewheel is turned to wake it up. Range the distance, read it on screen to a tenth of a yard, set the turret and take the shot. Pity it can`t give side clicks for windage; this is me being silly!

I personally love it but it’s not going to be everybody’s cup of tea. Price alone will hold it back for a lot of shooters. It’s rather bulky and doesn’t pack into a case easily. Some sort of quick release mechanism for the screen would help and in this area Rowan have helped me by machining an arm which is accessible via an Allen key and takes no time to remove and re-fit. This helps for packing but could be further improved. Battery life after the initial problem is impressive. I am still using the same one that came with the unit after maybe a dozen shoots and still shows 60% full.

Rowan Engineering have pushed FT `ranging` into the 21st Century, without actually altering the basic skills required in the sport- those of physically using focus to accurately judge distance. In doing this, they have also included many things in one package, which, prior to its conception, were always available but required many bits of paper and devices about the shooter’s person. For those who want the latest high tech stuff it must be on the shopping list and having owned the Pulsar for 6 months, it was a no brainer to go for the Digi-Wheel, to compliment the Pulsar rifle technology.