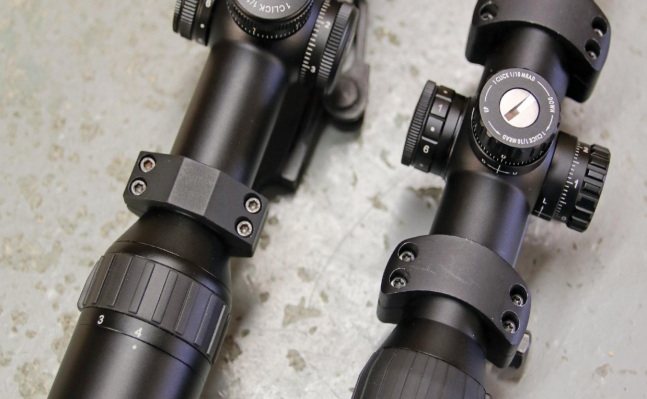 I have always liked compact scopes, probably a lot to do with my early days in Practical Rifle and later interest in driven shooting in Europe. The first British deer I shot, a Roe Buck, was taken with a Remy 700 with a Schmidt & Bender 1-4x24 on top at 200 yards, a bit low powered maybe, but it did the job. And I sometimes wonder if we, as shooters, tend to over-scope most situations a bit too much?

On test, are two models from Hawke’s Frontier 30 and Endurance 30 WA (wide angle) ranges, which are near identical and more separated by specifications than anything else. 30 indicates they use a one-piece, 30mm body tube. Both came with their Tactical Dot reticle in second focal plane (SFP), which is more aimed at Practical/Action-type shooting in both rimfire and centrefire rifles and Service Rifle. However, you can have the same thing with the L4A Dot, which uses an A4-type cross with a free-fl oating centre dot. The Tac Dot has a busier multi-hash pattern, ideal for quick hold-over, as opposed to the hunting-oriented L4A. Saying that, the former on an air rifle would be a good pairing too, with its multiple holdover possibilities.

Reticle choice also dictates click values, with the Tactical Dot offering 1/10- Mil graduations and the L4A Dot ¼ MOA. Both models only offer one spec each; Frontier 1-6x24 and the Endurance 1-4x24. They come with a bikini-type elasticated lens covers, lens cloth and CR2032 battery; so let’s take a closer look.

At 1-4x24, the Endurance would suit Service Rifl e in Service Optic class, as you cannot use a scope with a magnifi cation over 4.5x. Plus, its Tactical Dot reticle could easily be worked out for drop in Milliradians, primarily for either 223 Rem or 308 Win; being the two most popular calibres in this discipline. Plus, the ability to dial in 1/10-Mil corrections allows this lower spec a deal of precision, probably out to 600m. And I can also see it appealing to .22 LR shooters with semi-autos, field of view (FOV) is good at 33.3 - 8.4m @ 100m, with it acing the Frontier 1-6x24 at 1x by 2.5m. Values are true at 4x magnifi cation.

Click values are 1/10-Mil with 6-Mils per rotation, sub-divided into 1s and 1/10s. Elevation goes from 0-6 with windage being split with three each side from a central 0 position, which makes dialling in a correction a bit simpler. What did surprise me on a compact of this nature, was the top to bottom and side to side rotations. Counting clicks and turns showed 14 full rotations in both windage and elevation, which is a massive 82 Mrad, that’s a lot of movement! Turrets lift to unlock and can be reset to ZERO by a large slot head screw in the top.

The glass-etched reticle offers a lot of information without being too cluttered; check out the picture to see what I mean. Apart from the stadia etc, the centre is a horseshoe-type circle with centre dot, which with the short inner arms at 3, 6 and 9 o’clock, are the only things lit in red by the 6-position rheostat drum with individual turn off points on the left of the saddle. This allows you to pre-set a level then click back one to have it ready to go, rather than dialling up from 0. At 1x, the horseshoe makes for a fast and instinctive aim point; and up at maximum mag, the ratio to the target is very useable, even out at distance.

Eye relief is long at 4”, which suits heavier calibres and hunting use. Optics are fully multi-coated with 18-layers and the scope is parallaxed for 100 yards. Length is a compact 11.1” and weighs 18.3oz. For me, I’d pick this model for driven and dangerous game hunting with the simpler and more hunting-oriented L4A Dot.

The Frontier 1-6x24 is the slightly more expensive option with a 6x zoom range and 21-layer multi-coated optics, which is reflected in it’s price. It’s also shorter at 10.4” but heavier at 19.7oz, with fractional differences in the reticle, but it’s essentially the same pattern and principle. There are also a few minor design changes, with a longer and tapered magnification ring, turrets are taller and, on the elevation, and windage a raised base with directional arrows to aid dialling. As before, windage is split with 0 in the middle with 3-Mil either way and elevation a continuous drum from 0 – 6 Mil. Click values are the same, with full rotations quoted at 35-Mil (5.8 turns) but in use I counted seven. So, in essence, the same scope, apart from the spec and a few features. Values are true at 6x magnification.

The 1-6x24 spec of the Frontier makes it a useful all-rounder and I can see many shooters going for it due to its higher top end over the Endurance 30 WA. It’s the sort of scope I’d put on my 22 rimfire and 223 Rem AR15s with the Tactical Dot and again as a shorter range, driven/dangerous game option with the L4A Dot where the added 2x magnification would be of advantage. In use, the optics showed a clean and bright image and dialled positively and securely with no spring back or change in zero.