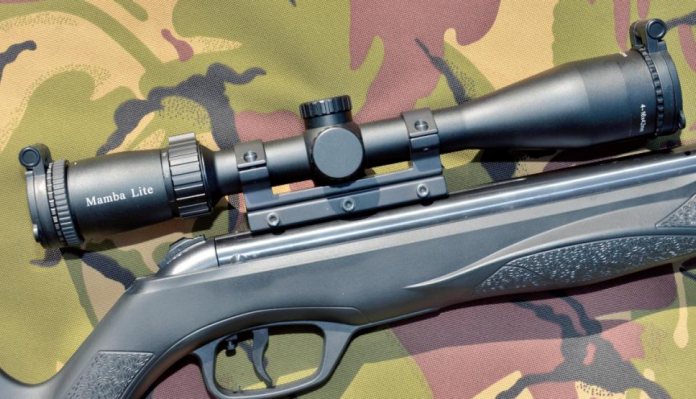 My records show that I first tested the original version of the MTC Mamba back in 2007, and that was a chunky specimen for sure. Great glass and a nice feel to it, but large proportions. On test here is the latest version of the Mamba Lite, and with the company’s products undergoing something of a revamp a while back, this is an altogether slicker looking package.

My test model here is the latest MTC Mamba Lite 4-16x42, where magnification is variable, from a minimum 4x, up to a very useful 16x, and the 42 relates to the front objective lens in mm. Flip-up lens caps are included, featuring a magnifying lens (more of which in a moment), rear fast focus, parallax correction via side adjuster, the SCB2 reticle with central illumination, and low profile turrets.

Check the spec sheets, and an interesting observation concerns the fact that this new model actually weighs the same as that original standard Mamba tested a good few years back, despite the ‘Lite’ label. Granted, it’s an altogether slicker offering with a streamlined profile and one-inch body tube, as opposed to the original’s 30mm, but it’s not as super light as my old Genesis Ultra Lite for example. Of course, various inclusions have added small amounts of weight here and there, but despite that, the end result is still a scope that shouldn’t too easily unbalance a combination.

The one-inch body tube gets a highly practical matt black finish, and those flip-up lens caps are also included. The caps are of the screw on variety, and in my experience, do have a habit of unscrewing and becoming slack at inopportune moments – so I still prefer the quality push-fit types.

That said, the ones used by MTC here have a couple of tricks up their sleeve. Firstly, they incorporate a four-way positional design, so can be left sitting upwards, forwards, lying flat back on the scope, or closed. Secondly, MTC have cleverly built in a x2 magnifier into the rear cap, which means that, in its open/vertical (90⁰ position), the turret markings can be easily read by the shooter, (myself included here) with sadly deteriorating eyesight. Quite ingenious, and patented, I hasten to add.

Zeroing the Mamba Lite was a simple affair, and the ¼-inch click value turrets have a pleasingly positive movement, and clear simple markings from 1 round to 11, on both windage and elevation. Fingerfriendly, easily adjusted, and once finished with, just screw back the caps and you’re done. Adjusting the magnification is via the nicely weighted collar to the rear, and this can be screw locked to prevent unwanted movement if required.

Setting the focus and effectively correcting parallax error, is done via the turret on the left of the saddle. This is marked up with a minimum distance of 10-yards, and this came in crystal clear on my test scope. Next markings are 25-, 30-, then 75-, 100-, 150-, 200-, 300-, 500-, 1000-yards and then infinity (∞). But for airgun use, after some serious subtle sessions down the range, I would probably set the dial to just under 25-yards, and then you are set to go for either HFT or hunting. Shoot on between 8x and 10x mag, and clarity holds throughout the usual target distances.

MTC fit this scope with their SCB2 (Small Calibre Ballistic) reticle, and that means we get a plethora of aim points, Mil and half Mil reference points, to play with. I think it’s a great design, with the only criticism being that the ultra-fine stadia pattern can get lost in dark tree foliage and low light. It’s a regular criticism aired at many scopes, largely remedied by the inclusion of German-style outer thick posts, that will help guide the eye to a lost segment of reticle.

That said, this design is extremely popular, and MTC continue to be ‘in vogue’ on the Hunter Field Target circuit. As usual with scopes, the image has to suit your eyes and personal evaluation can play a part.

Illumination of the central cross in red is possible for those that desire it. Firstly, make sure a CR2032 cointype battery is loaded into the top of the parallax turret. Then, a long press in the centre of the button switches on, subsequent presses alter the brightness in six stages.

Image quality with this scope is very good, with crisp, impressive clarity, edge to edge, and no apparent distortions. The image is bright, and everything feels reassuring. So, yes, this Mamba Lite is a welcome addition to MTC’s line-up, with plenty of features to make it stand out. Nicely presented, and well finished, for £249, it represents good value for money, in an extremely competitive market. An ideal hunting and general use scope, that could double up for HFT too.