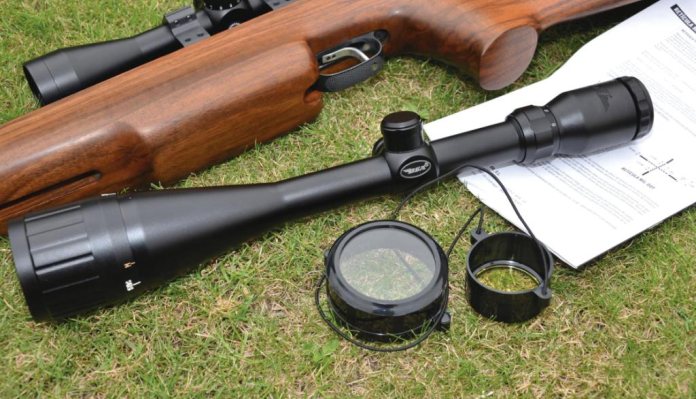 BSA’s rationalized lineup of optics currently offers the EMD Essential range, specifically aimed at airgun shooters, and on test here is the Essential EMD 6-24x50 AO model. Lovers of higher magnification are catered for nicely here with variable mag, from a highly usable 6x, right up to a whopping 24x. You will, of course, need to avail yourself of some form of high mounts, given the 50mm objective but that’s a minor detail.

These EMD models all look and feel the part. The combination of the black anodized matte exterior and that distinctive magnification collar, result in a smart piece of glassware that’s already off to a flyer, given that neck-turning RRP of just £146 including lens caps!

Set the fast focus using the rear dioptre and you’re ready to go. There’s no rubber protector on this by the way, but this is largely academic in practice, given eye relief dictates the head be a few inches away when a proper sight picture is found. Dialling the magnification, clearly marked here with white numbers (6-24x), is easy with the rear collar. It’s all smooth in operation and the collar itself can be locked off with an Allen key if required.

With that AO in the name, we get the Adjustable Objective and that means front-mounted parallax correction. The entire front objective bell rotates, so just view the target, turn the dial and read off the range. OK, it doesn’t work quite like that. In fact, because this isn’t an FT scope, it’s more a case of knowing the distance of the target in advance, then twisting the dial to correct parallax error at that distance. A clear target should be the result but unsurprisingly, personal eyesight has a bearing on results.

Everything is clearly marked, again in white, but this time the figures are etched. White figures are marked from 15 yards, then 25, 30, 50, 75, 100, 200, then infinity. In between these figures, there are gold etched numbers, and these are the same values in metres, for those so inclined. The objective dial physically winds down below the 15 yard marker, and for the record, on test, with this dial on the absolute minimum and the scope set at maximum 24x mag, I found perfect clarity began at around 16yards, so not far out. Individual eyesight, as mentioned, will always throw up variation in this area, so don’t expect everything to be spot on. Instead, treat the markers as reference points to work with or just add your own stickers, like many shooters do, if they don’t tally with actual ranges. Wind down to a much lower magnification setting and clarity will instantly seem less critical, so enjoy the versatility that this scope brings.

And so we come to the reticle design and in the case of this model, it’s a Mil-Dot. Now, I’ve tested a few BSA scopes of late and the Mil- Dot fitted does differ within the range. The recent EMD 3-9x40 MD had quite a fine inner crosshair, plus very positive Mil-Dots. The 6-24x model (on test) does suffer slightly from the crosshair being a little too thick, so the dots are not perfectly defined and a little vague. All still perfectly usable, just not quite as clean and refined as its stablemate.

Unscrew the caps and the turret mechanism can be viewed. Click values represent a 1/8” @100 yards and whilst the lack of numbers on the dial may be a fraction irritating, given how this style of scope will be used, it’s par for the course. Basically, we aren’t talking oversized target turrets here, to adjust for drop, so more a case of set the zero and replace the caps. The turrets have finger-friendly twistable heads too, plus click movement is nice and positive as well as audible, which always helps.

Zeroing was easy to achieve and the adjustments were all importantly, repeatable. One key observation here, and it is so often the case when shooting on higher magnification, is that with this BSA optic on 24x mag, eye/scope alignment becomes fairly critical. As usual, this isn’t a negative as it forces the shooter to be consistent in their approach, which aids accurate shooting. Fail to get things right and the full sight picture will soon be lost. In addition, back light can result in a milky, blown-out image, yet fit a scope enhancer/ rubber lens shroud of some sort at the rear and the image holds. These shrouds are pretty inexpensive and can transform the use of high mag glassware. Indeed, on test, on high mag, image quality and clarity with a shroud in place were extremely good; sharp, with no distortion or aberration.

About the size of it

Yes, it has its faults, and this is a sizeable scope for sure, so something to bear in mind. However, all things considered, there’s no doubt that the versatility and capability make it a cost-effective move. So, if you’re after a hunting scope that won’t break the bank, with image quality, function and feel, that all belie the asking price, then this has to make the shortlist.