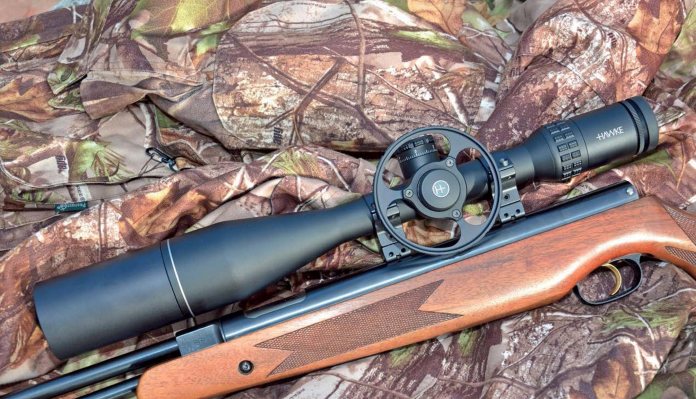 It’s been hard to avoid Hawke’s advertising throughout the shooting press and it definitely left me wondering about the new additions to the range. I now I have one of the latest Sidewinders in my grasp and I have to say, there’s a real air of quality about it.

Hawke has devised a range of new models, effectively offering a choice of magnification, specification and reticle design. On test is the Sidewinder 30 SF System H5 8-32X56 which retails for £529. I should make clear at the outset, that these scopes are no revamp, having been designed from the ‘ground-up’, as Hawke put it.

Built around a 30mm body tube, these Sidewinders show a matt black non-reflective finish. Inside, the System H5 optics feature 18 layer fully multi-coated lenses, whilst highgrade low dispersion crown glass is used ‘to remove radial distortion, and combat chromatic aberration’. There’s a new larger eye box to maximize field of view (FOV) too, which is something Hawke are keen to stress.

The magnification collar adjusts from 8-32x, with a pleasing level of resistance. However, in keeping with the competition, this Sidewinder also comes with a small ‘throw lever’ to zoom through the mags. The benefits of controlling magnification with the lever are two-fold. Firstly, in poor light, it’s visually possible to know which mag you’re currently set to, just by seeing the angle of the lever. Secondly, and more importantly, when wearing gloves the operation of the collar becomes far easier. To screw the lever into place, just remove the threaded keeper stud first, and it’s that simple.

Once the scope is mounted on the rifle, the first job is to fine tweak the rubber-protected fast focus ring. Twist until the reticle comes into full focus as well as the target in the normal way. Except that this Sidewinder includes a locking ring, allowing the focus to be set and clamped up, to prevent accidental movement in the field.

Look to the tactical style turrets and the new design is particularly pleasing, for the sheer precision of execution. Pull up the turrets and they can be adjusted, then once set, push down to lock. Everything feels superbly engineered and incredibly slick in use. They show 1/10 MRAD click values and the click is both audible and satisfyingly positive. Suffice to say I achieved zero in record time, with no nasty shocks along the way.

Eye relief is specified as a ‘generous’ 4” with this model and this becomes a handy feature when the scope is fitted on a firearm that produces heavy recoil. Where airgun use is concerned, we have to be mindful to minimize parallax error, which can creep in if the image isn’t viewed centrally through the scope. Parallax correction is dialled in via the left-hand turret, which is clearly marked up at regular intervals from 10 yards to ∞. The scope comes with a 3.75” side wheel and this has identical range distances marked.

Attaching this side wheel is a bit fiddly since Hawke has dispensed with the pressure-fit design and switched to a locking bracket. First, remove the three small screws on the bracket and then push the wheel over the left side turret. Once it is in the correct place, where the marked distance on the turret matches the wheel, reposition the bracket and tighten up the screws. Of course, this isn’t rocket science but getting it to stay in the right position whilst tightening is fiddly initially. However, once locked in place, it works a treat and is undeniably more stable than the old system, plus the movement has just the right amount of resistance.

This model uses the 20x Half Mil reticle which is laser etched onto the glass. Large Mil markings and Half Mil marks in between, run equidistant from the centre, and this entire floating crosssection (5.5 Mil across) can be illuminated in red, at the click of a switch. The rheostat control is attached to the parallax dial and offers six levels of brightness, with alternate ‘off’ stages.

In use, there’s no doubt the reticle is a super clean design and with those lower graduated windage dots, plus a plethora of additional reference points, it’s pleasingly technical. That said, I can’t help but repeat one of my main gripes with many scopes, in that some thick outer borders or posts should be incorporated into the reticle design, just to lead the eye into the target when faced with badly lit foliage behind the aim point, Germanstyle if you like. Illumination saves the day of course, and full power worked perfectly for daytime use but we don’t always want to use illumination.

As for image quality, head position is critical with these Sidewinders in order to gain a perfect sight picture. This is no bad thing since it promotes perfect consistency and alignment. Clarity, sharpness, and definition are all impressive, plus with no discernable fringing, it’s a big thumbs up for optical performance.

If viewed from an FT point of view 32x mag is still fairly low, but with fairly consistent ranging possible with the side wheel in place, this Sidewinder could double up. Of course, Hawke does make a dedicated model with huge magnification for that demanding discipline. Where this model really scores is in a hunting scenario, where the versatile specification can definitely help. A large FOV, quality image, technical reticle and impressive build quality all come together nicely, and Hawke deserves plaudits for a serious, well-researched replacement of a highly popular scope.

As you would expect, the Sidewinder System H5 models come rated waterproof, shockproof, and fog proof plus include Hawke’s Lifetime Warranty, so it’s a sound purchase whichever model you opt for.