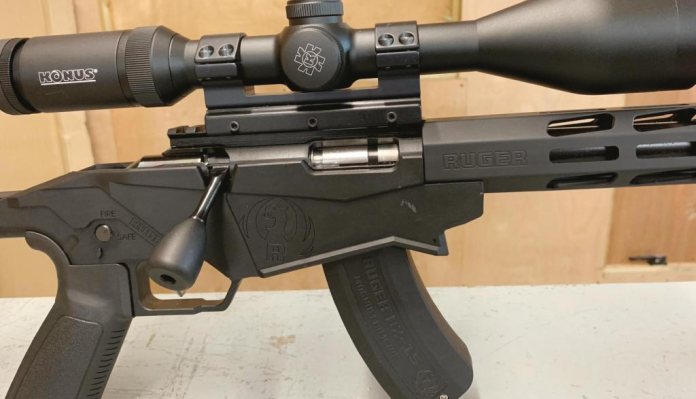 If you read last month’s magazine (if not, why not?) you will probably remember Konus’ latest scope, the EL-30, which offered, 10, selectable, on-board, electrically generated reticles. After some initial misgivings and a lot of use I came to the conclusion that it was a rather clever concept with a deal of potential. It was not without some less than ideal features and I get the feeling that they will be producing a Mk 2 version, that could be the start of a new wave in how we think about telescopic sighting systems.

I say this, as along with the EL-30 came a far more conventional model, the KONUSPRO 3-12x50 EVO, which I initially thought, oh yes we’ve seen this before! However, closer inspection showed that Konus have again upped their game, to produce what I consider to be a very useful, general specification design for a variety of shooting needs, as we shall see. Plus, finish and build quality is certainly improving too.

The spec is 3-12 x50, for those that don’t know, that means you can expand the magnification range from 3 to 12 times, which is a very useful and general specification that will suit hunters using airguns, and rimfire and centrefire rifles alike. Equally, the front lens (objective) is 50mm in diameter, so will let in a lot of light when compared to the smaller 40-42mm objectives. So, offering better performance in low light conditions, such as dawn and dusk.

A few years ago, the benchmark for near all shooters was the 3-9 x 40 or 50, but the added 10 to 12 x magnification top end will allow you to reach out further and now seems to be the preferred choice for a standard optic. Looking at some of my hunting scopes shows that amongst my eclectic selection, I have three 3-12x50s from various manufacturers that I use the most for both my rimfire and fullbore needs.

The body tube is one inch, which may seem a bit old school these days, and not perhaps a first choice as it was back then, regardless, 30mm and larger now seems to be everywhere, but 25mm/1” works and will save a bit of weight too. The build shows a one-piece body in a well applied, semi matte black finish. There’s a decent sized saddle with low profile, capped turrets in the usual places and a combined rheostat and parallax drum on the left.

The rear bell shows a decent sized eye box with fast-focus system, with the magnification ring being slotted for grip with a raised fin to aid fast dialling. Numbers are picked out in white, as they are on the turrets, parallax and rheostat. The EVO comes packaged with a cleaning cloth, battery and 3” sunshade, weighs 31 oz and measures 13.5” (less sunshade). All Konus optics include a 2-year warranty. To sum up what you are getting, I’d say this model feels competent and well presented.

The turret build marks the EVO as a primarily hunting design with screw off caps, so very much a zero and forget system. Although low, the drums are vertically slotted and easy to dial and can be re-set to 0 position by two small Phillips screws in the top, maybe a tad too small. Click values are the good old, 1/4” MOA types, with 60-clicks per turn, divided into 15 MOA sections, each subdivided into 4 x ¼ MOA increments. They are easy to count, and the clicks are nicely audible too. Most generous, is the top to bottom and side to side, offering seven full rotations and a bit of overrun, so in theory 105 MOA/105” at 100 yards of total movement; not too shabby. Not that is really matters on a system like this, but windage is split 7 – 0 – 7 in each direction.

The combined rheostat and parallax drum is large and long and puts me in mind of how the German brand of Karl Kaps do this too. The focus is inboard and is marked in yards; 10, 15, 20, 30, 75, 100, 200, 300, 500 and 8. Operation is pleasingly firm and there’s a white triangle (witness mark) on the side of the saddle to measure off. The rheostat (outboard) is your typical, drum type and offers red and blue colour options in five increments of each, along with switch off positions in between. This allows you to dial back from a preferred setting and simply and quickly click back onto it as required. Operation in this case is just a tad too firm and could smooth up with use.

The glass-etched reticle is a form of dual-X type, with four, mid-width outer posts and a slightly slimmer, inner floating cross. I’m not usually a fan of this arrangement, as I always find that there’s too much nothing around the actual aiming pattern, but in this case its dimensions are quite generous, so no complaints. It’s also only this central area that’s lit, which again is how I like it.

All lens surfaces are fully multi coated, as is the case these days and give a bright and crisp view in all conditions. The medium nature of the reticle means it’s not too thick to obscure things, but with enough presence to stand out well against darker backgrounds and conditions, even when unlit. Konus says this about the field of view (FOV): “field of view is extremely generous, being 20% wider than the other comparable models that are currently on the market.”

The EVO overall comes over as good, general purpose scope with a highly useable specification at an excellent price. Optical quality is generally good, although there’s very slight vignetting at the periphery of the view. This is a basic model as to the turrets, but the addition of the side parallax function makes it just that bit more practical in the field. I did find the illumination to be a bit low on brightness in some conditions and would have preferred it just red with 10 increments, but that’s a small niggle, as I don’t use it that much anyway on my scopes. Overall, a good piece of kit.