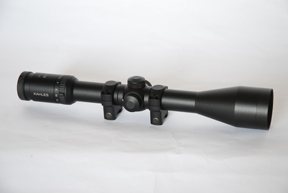 I currently own two Kahles scopes a 3-10x50 CT and a 1.5-6x42 L CSX and I really rate them, so I was pleased to get their latest K 418, 4.5-18x50 Competition model from importers Open Season Ltd. There are two versions, the one I have here shows the standard, low, hunter-type turret with removable caps, the other – the K 418 TT is the same but with taller, target-types for easy adjustment. Both offer side parallax too.

Used as I am to Kahles there were no surprises just the same build quality I have come to expect. The build goes for a one-piece, 30mm body tube with an oversized saddle area. As I said turrets are standard/hunter-types with the raised bar in the middle for dialling, so with this the K 418 version very much fire & forget, in that they are zeroed and the caps put back on with any corrections input through the reticule. I have always found this style a bit fiddly, but Kahles include their red MultiSpanner, which speeds up the job no end.

Click values are ¼” @ 100 yards (7mm @ 100 metres) with 30 clicks per turn and four full rotations available, this figure is the same in both windage and elevation. This is not a large amount of correction; being a maximum of 30” @ 100 yards. So you are in danger of running out of movement if you are unlucky. This did not happen to me as I fitted the K 418 to my custom Winchester Model 70 in 300 WSM. But some form of adjustable base like Leupold or Burris offer, where you can at least course adjust windage would not be a bad idea either!

In movement the turrets are firm and click round positively with little chance of over running. A white triangle is set behind both windage and elevation drums as a fixed reference, however, the markings on the moving section do not go around the whole circumference of the drum. On the left is a side focus (parallax) marked 30, 50, 100, 150, 200, 400, 800 & ∞.

The objective uses a four lens system that offers a crisp and clear image and as ever all glass has Khales optimized AMV coatings to improve light transmission. The reticule is set in the 2nd focal plane (image and reticule stay the same size no matter what power you are at). At the rear is the usual fast-focus (European) eye piece, the magnification ring has a rubber gripping area with a raised lug for a bit more purchase when it’s needed. Weighing in at 21 oz the K 418 is reasonably long at 14.1”.

Reticule choice offers either standard Mil-Dot or Plex, which looks like a tight version of the good old Dual-X. However, my example came with an improved Mil-Dot pattern near identical to the Leupold TMR (Tactical Marksman’s Reticule). This uses the finer hash marks as opposed to dots and has ½-Mil subtensions out to four Mil then 1/5-Mil for the last dot, the centre of the cross is open and the outer/thicker section of each arm subtends five-Mil. Meaning you can measure up to 10-Mil if required.

The real difference about this is the fact the cross does not extend to the periphery, so floats in the view. This is not a problem it just takes a bit of getting used to. I have the TMR reticule on my Leupold 4.5-14x50 LRT M1 and it’s very useful, as converting drop/wind figures to Mil; especially with the ½-Mil subtensions makes for a precise yet quick ranging system. Given this is a Mil-Dot in the 2nd focal plane, there is no indication of what magnification setting you have to select so you can Mil the target at the correct power. So I assume that it must be at maximum, which is the rule of thumb if there is no specific number.

Where perhaps the K 418 scores over the Leupold and similar optics is with its higher top end magnification of x18, which might well suit the serious long range shooter of varminter. On that point the field of view at 100 yards/meters is 25 - 7 ft / 8, 2-2, 2 m accordingly.

In use the K 418 worked well, the view was clear and crisp view right to the periphery, the fast focus is always useful too. The parallax did not come up dead on the numbers but pretty near and to be honest it’s rare to find a scope that does this spot on. However, I use this facility purely to get the target in focus, so the basic range finding ability it offers is of no concern.

My one negative has to be the limited amount of movement the turrets offer, as you could well be more than 30” off when zeroing, so you would have to take a view on the mounting system used. On the price front and compared to other European optics in this class this Kahles at around £1100 represents good value for money.