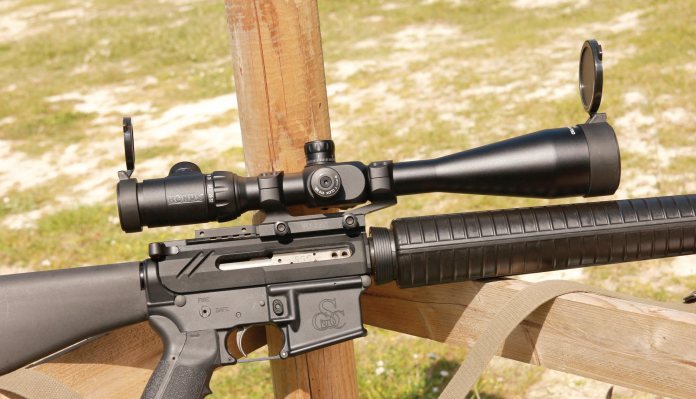 I remember when Konus optics hit the UK. Given they are made in China and represented an honest price option for us with a good deal of choice within this most lucrative product bracket. Let’s be clear: cheaper scopes have come a long way and these days represent exceptional value for money and offer features and specifications for every pocket! What I have here is their big KONUSPRO 8-32x56 F30, its specification making it a consideration for longer range tactical/precision use and maybe even Field Target (FT) airgun shooting.

It pushes the tape at 17.75” and weighs a hefty 31.4 oz! The build offers a one-piece, 30mm body tube with a long, rectangular saddle, lockable target turrets and a 40mm parallax drum on the left. The eye piece bell shows an alloy magnification ring slotted for grip, a fast-focus system and a drum-type rheostat at 10 o’clock, which offers the option of red and blue illumination. The coin-type CR 2032 3volt battery sits under the cap and the package includes a spare, lens cloth, Allan key for turret zeroing, a 4” sun shade and flip-up lens caps. The finish is semi-matt black and the scope appears well presented.

The spec of 8-32 x 56 sets the F30 very much in a specific area, Konus also offers a 6-24 x 52 version, which would be my choice! But what really sets this model out from the rest of their range is the fact the reticule is set in the first focal plane (FFP), which is a first for them!

The reticule is glass-etched and of a hybrid, skeleton Mil-Dot design but with hash marks as opposed to dots, which I have always found is better for placing on target. Let’s face it Mil-Dot in our world has taken on a whole new meaning as we don’t use it for its original purpose of range finding. Instead it offers a convenient ladder (hold over/under) system as your bullet drops can be converted into Milradian. There are five Mil-Dots on the 3, 9 and 12 o’clock arms and seven on the 6 o’clock. All show ½-Mil subtensions from the centre at four on 3 and 9 and five on the 12 and seven on the 6. The fifth on the 3 and 9 o’clock arms are divided into 1/5-Mil with ¼-Mil on the 6 o’clock. The centre of the reticule shows a free-floating cross with a circular aim point rather than a cross hair. This is the only portion that is illuminated.

Given this is an FFP system this design is a mixed blessing, personally I prefer the pure precision of a plain cross, as the range increase with the circle you will lose a bit of this. Though in fairness it works well from 8 – 12 as it’s small enough to give a decent aim point. Also from x 20 to x 32 magnifications you will lose 2-Mil-Dots off the 6 o’clock arm, which I doubt will be an issue for most users. However, with a FFP system click values are constant no matter what mag you set. Combine this with a well balanced reticule ratio and you do reap the benefits of this system; something I have begun to appreciate more lately! A final item from the shooter’s eye view is the level bubble set in the base of the view, which will allow you to remove cant from the equation.

Turrets are divided into 6-Mil then subdivided into 10s. They are the lift to unlock-type, which is practical, they dial easily too with good audible and tactile clicks. A large Allen screw in the top of the drum is backed out to disengage so they can be set to zero. One thing I thought Konus missed was not splitting the graduation on the windage turret as it goes from 0-6, better would have been 0-3 in both directions as that makes winding in a correction just that bit easier!

The final item is the side focus, this large 40mm wheel is hand filling and marked 10, 25, 50 100, 200, 300, 400, 500 yards and ∞. Markings are irrelevant for range finding and if you subscribe to noting actual distances then a piece of tape around the circumference can be used. Konus also offers a 135mm extended side-wheel, which slips over the original and is held by Allen screws.

In use the F30 proved a real performer. Lens quality was good giving crisp images and clarity, turrets worked positively and easily and the fact they can be locked down quickly is good. At x32 mag the reticule shows tiny spider lines around its edge and parallax is very critical – one for the FT shooters no doubt! Illumination; well I have never bought into the whole multi-colour thing, so I’d sooner have just red with 11 brightness settings! It is however a big bugger and might present some eye relief issues. I put it on my 20” AR15 with a reach forward mount and even then I had to bring my head back a tad. Also Konus offers a Lifetime Replacement Warranty, they say: “That’s replacement, not repair!” Sounds good then!