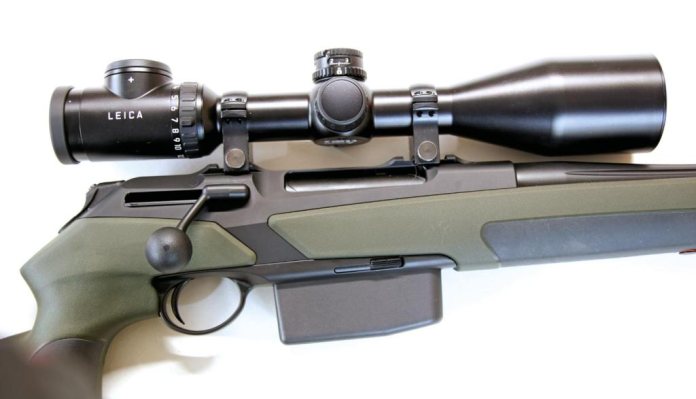 Leica have always had a massive rep for quality optics in the area of spotting scopes, binoculars and laser rangefinders. Yet they did come latter to the top-end European scope party than the obvious competition, with the VISUS and ER ranges, newer and more controversial is the Magnus, with its extended, x6.7 zoom range. This initially brought them to loggerheads with Swarovski, who were the first to offer a x6 times zoom range with their Z6i series, which has now been resolved.

An extended zoom range allows designers to pack more top and bottom end into the magnification scale, so allowing for more versatile usage. A good example of this would be the Magnus 1.5-10x42, x1.5 is low enough for driven hunting, yet x10 takes you out to medium ranges easily. I think this function is of less relevance on the higher end models, as they are brought for longer distance and precision use. So, the lower, bottom end is probably used less; however, and saying that, the Europeans do love these bigger objective, higher mag scopes for low light work.

Given the build quality and ability of these top end European scopes is similar, which is near unavoidable, the Magnus is generally familiar; although on test is what I would term the longer-range hunter, the 2.4-16x56i with BDC (bullet drop compensation) turret, though they are also available with a more standard elevation drum, which will save you some money.

The scope is of conventional build with a one-piece, 30mm body tube, all models are illuminated with a slightly familiar rheostat design! It’s positioned forward on the eyepiece bell, behind the magnification ring.

The control is a rotary, rubber pressure pad with OFF in the middle, move it right (sun symbol) and its on full power, move it left (moon) and it’s for low light. Brightness is controlled by pushing down on the edge of the drum right side + and left -. Plus, it will automatically switch off if the rifle is canted over at 90° or angled vertically. The battery compartment lives under the drum and takes the standard, coin-type cell (included).

Glass quality is brilliant, as you might expect, with a quoted 92% light transmission, Leica use an external, water-repellent coating called Aquas Dura, which also works well and if you’ve never experienced this ability, it’s a real boon in the wet or damp weather, as moisture literally slides off. As standard, turrets offer 1cm clicks @ 100m with a generous 100-clicks per rotation with 2.75 turns available. These are further sub-divided in 5 and 10 cm divisions and dialling in corrections is positive. Windage offers 0-50 in both directions. On the left of the saddle is a parallax drum, again useful for longer ranges.

I had the BDC version, which is a little different, with what Leica calls ‘Direct Dial’ turrets. The elevation is lockable by a rotary collar, with closed and open padlock symbols indicating the status. The drum above has an observation window, where you can see the moving dial as you rotate it against a fixed reference stadia. Like both the Zeiss and Swarovski BDC systems, the Magnus only offers slightly less than a single turn of correction once zeroed; well, in this case, 93cm. This is done to give a ‘zero stop’ position and is achieved by a fixed stop pin in the base of the turret that contacts another in the roof of the moving upper drum. It can be unlocked (twin grub screws) and set to zero 0. To do the same in windage you press the centre of the turret which allows the graduated scale to free-wheel to 0 then simply release it to re-engage; neat!

If your zero requires you to adjust more than a single turn, then the turret has to be removed – two Allen grub screws in the rim are unscrewed (Allen key supplied) and it’s lifted up and over the fixed stop pin to gain another rotation. Leica does not explain this very well, although alludes to the fact that it’s possible to run out of elevation, as it is with any other scope of this type. Their solution is to fit angled mounts; all well and good if they are available for your rifle; which; with more specialised makes; might not be the case!

I fitted the Magnus to a Merkel Helix Speedster in 308 Winchester and didn’t have any problems with running out of elevation, using RWS 170-grain Doppel Kern ammunition. I’m not a big fan of BDC turrets on hunting scopes, preferring to use eyeball holdover; but when the range is near maximum and providing you have zeroed correctly, they do allow time for a more considered shot! Alternately, this is the sort of optic I’d use more in a varmint role; here, BDC allows for better precision on smaller targets at longer ranges. On that point, the turret movement is firm and easy to count, so dialling in is not an issue.

For the BDC model, Leica offers three reticles: L-4a, L-Plex, L-Ballistic. Direct Dial offers a set of 12 rings that should cover most standard calibres and is naturally included with the BDC model. Leica has a ballistic resource, where you load in your data and are told drops and what ring is best suited. However, in real time, this is reliant on external factors like barrel length and ammo performance. Once you’ve set it up, get out on the ground and shoot it out to all your ranges and note the actual fall of shot!

In use no complaints, the 2.4-16x56 was very much as expected; a top quality European design with a 100% build quality and ability. Once set up, the BDC system is an asset for longer range hunting.