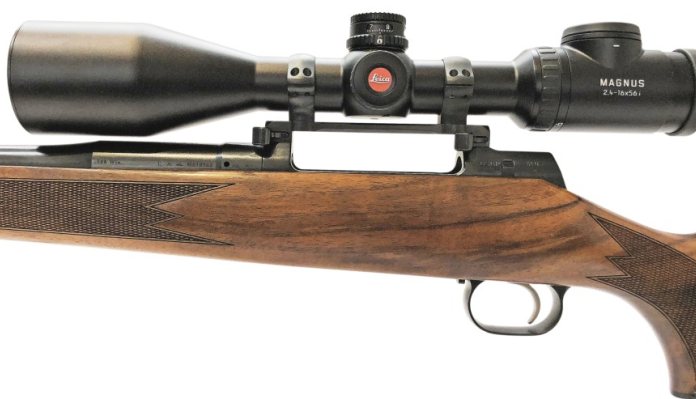 This article is initially not a full-on scope test, but an introduction into something new I’m trying to solve a problem I have with deer control; let me explain! For many years, I’ve been able to cull enough deer on my permissions, without having to resort to shooting at the first hint of light in the morning, or on the cusp of darkness at the end of the day. However, in the last three years the Fallow, especially, are gone by dawn and just not appearing until I’ve left the high seat and am on the way back at the car in the evening. I can see them emerging onto the fields through my Pulsar XQ19 thermal imager.

I dislike shooting near dark; the deer are hard to identify and, if I get a runner, it could be difficult to track, follow up and recover if the animal expires deep in the woods or out in the crop. So, around half an hour before dusk was when I used to pack up. Also, I now find myself shooting at longer distances than I used to. It was unusual to shoot past about 160m, but the Fallow are now so wary that, if I get a chance at 250m, I need to take it. Rather than have them spot me stalking closer, even though I like to think my Bushcraft skills are not too bad. As an example of how difficult stalking has become, if I detect the faint glow of a group of deer behind some thick cover with the thermal, it’s not unusual for them to clock me and be off; even though I’m downwind, noiseless and not actually visible.

So, something must change to get on top of the deer. I obviously cannot shoot through cover, or over a lamp at night, however I can shoot longer distances and wait a little later in the high seat, which means an update to my equipment. I have a small hand held laser rangefinder, but it’s fiddly to get out of a pocket and, approaching dusk, the viewfinder is just not bright enough to pick out deer on a dark field. My Swarovski SLC 7x42 binoculars have served well but combining the two would be both a weight saving and perhaps give a clearer image to range closer to the end of play. My scopes, a Swarovski Z6 2.5-15x44 and a Leupold LPS 3.5 -14x50, have both given exemplary service, but neither are great in low light at higher magnifications.

So, my thoughts strayed to a pair of Leica rangefinder binoculars (8x42 HD-Bs) and the Magnus 2.4-16x56i rifle scope, as I wanted the side focus too. I liked the binoculars as soon as I picked them up and looked through them; they felt right in my hands. The image seemed very neutral and clear to me, the 20-year-old SLCs a little yellow by comparison, but still sharp. No doubt the newer Swarovski binoculars are an improvement, but I was drawn to Leica’s ballistic capabilities. Within 20 minutes at my desk with a laptop, I had programmed them with an board ballistic profile (Euro 6, one of 12 curves, over 6 different zero distances, so 72 variations in total) that was just 1 cm out at 300m on paper for my .308 165-grain load. I shall of course check this out on targets before moving on to live deer and adjust accordingly.

It seems that the Euro 5 profile is very close to my 6.5x55 130-grain load, so easy to change with a few clicks on the two buttons on the binoculars before venturing out with that rifle instead. Should you wish, the binoculars come with a Micro SD card that can be programmed with your own ballistic curve, for pin point accuracy, although I may not need this, if I find the pre-set curves match my ammunition.

This means I can spot deer through the binoculars, range them out to 1800m, although the best I’ve ranged fallow at to date is 1050m, (ballistic data is shown up to 800m only). These binos then give click values to put me on target at the distance measured, i.e. 250m, 9 clicks up, 350 m, 18 clicks up etc. Simple! The program takes into account for up or downhill shots, temperature and air pressure also. The binoculars can output click values in 10mm (for the Magnus scope), 5mm, 1 MOA, 1/4 and 1/3”, or just Geovid HD-B 6.5x55 home load ballistic curve print out holdover in inches or cm. So, all scopes, with dialable/BDC turrets or not, can be accommodated for.

However, this is where the Magnus scopes score when using the Leica HD-Bs; 12 rings come with the scope that can be installed in the turret to match the output of the 12 preset ballistic curves of the binoculars. I shall explore this when I have had the two units for a while. But as an integrated system, it appears to hang together very well.

Editor, Pete Moore, recently reviewed the Swarovski DS 5-25x52 scope that ranges and adjusts the reticle for a compensated shot all in one, and he seemed to be impressed with the system. Mine is a different way of addressing the problem of accurately ranging for longer distance shooting. There are a few points

I would note in comparison! The price of the DS is stiff, c.£3450, and it sits on just one rifle. The Leica binoculars were £1700 (the 2200m model, not the 3000m ones) and the scope comes in at £1900 from Cluny, so £3600 in all, but of course the binoculars are not rifle-specific. The DS weighs a hefty 1090g against 785g for the Leica and mounts need to be a special 40mm in comparison to the more normal 30mm. As the light transmission of the DS is quoted around 83%, I would expect in low light it’s not that capable; although in truth, I’ve not looked through one.

In the coming months, I’ll be using my new setup and will report back with another article, but my initial thoughts are that both the binoculars and Magnus scope are probably the best I’ve looked through. Anyone with just a passing interest in photography will know Leica have a fabulous reputation for the quality of their lenses, so that’s not really unexpected. The focus now is to see if I can indeed shoot later towards dusk with the 56mm scope and further, accurately, with the help of the ballistic program built into the binoculars.