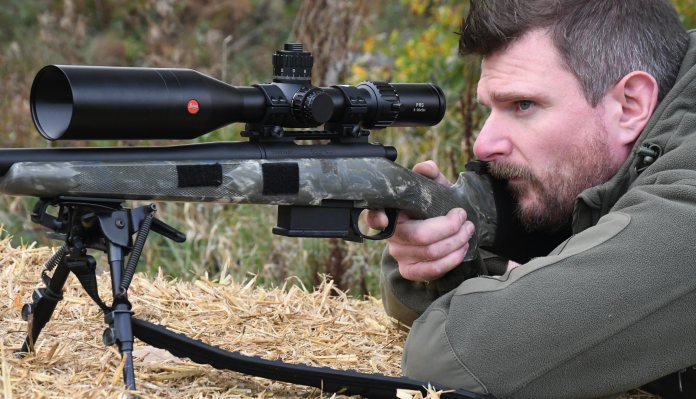 The new PRS scope from Leica is designed to appeal to precision rifle shooters with its first focal plane (FFP) mechanics and taller, fast adjusting turrets for longer range shooting solutions, all dialled in with the flick of the wrist. Three reticle types are available and being FFP, increase in size through the 6x zoom range so the image and reticle remain in exact proportion. The review here shows the simplest L-4a, a basic crosshair with a fine illuminated centre dot. The other ‘Ballistic’ or ‘PRB’ reticles show milliradian hash marks corresponding to the click values of the turrets.

A 100mm sunshade is supplied and it threads securely to the body for minimal unwanted light entry interference or reflection. Leica’s discreet logo is inlaid on both sides of the 56mm objective lens body, swollen from the 34mm one-piece main tube with a spherical saddle. It’s all hard anodised matt black, showing 48mm ahead and 67mm to the saddle’s rear. So plentiful mounting space for linear position control to suit the 90mm+ eye relief. The overall length is 365mm with a 1030-gram mass, about average for this sort of optic.

The tall elevation turret is calibrated in 10mm clicks at 100 metres/0.1MRAD. It’s ideal for true longer-range ballistic potential with 100 clicks per turn for dialled corrections. The maximum mechanical adjustment is 32 MRAD and mounted on a zero-inclination rail, left me 15 MRAD remaining for shots beyond my 100m zero. A 20 MOA rail (approximately 6 MRAD) would increase this to 21 MRAD to shoot further.

Windage offers 18 MRAD total range and the turrets show folding levers that lift to unscrew the outermost indicator dial when re-aligning the markings after zeroing. The windage cap also stores a tiny Allen key for adjusting the elevation turret’s zero stop, which is set up with the outer collar removed and requires three grub screws to be loosened so it can be spun towards its stop. I liked the fact setup allows a few negative ‘down’ clicks below zero, just-in-case.

A vernier turn indicator in the form of a small button telescopes upward as revolutions are added. It’s physically tactile but you need to read the vernier scale to be sure of which rotation you are in beyond the first. It’s always possible to turn back down to the zero-stop if you ever lose count, you can’t get completely lost. Windage is marked 5 MRAD left and right of centre with well-spaced tactile clicks on the 37mm diameter dial. There is no overrun when dialling and markings are bold with each spaced just over 1mm apart for visual reference.

The left side parallax dial adjusts from 20m to infinity without backlash and no internal mechanical perception of lens package motion. It navigates precisely in and out of focus at higher magnification from either direction through its spacious 270° range of motion. Illumination is controlled on the outermost dial, marked from 1-10 with intervening off positions. The red dot is crisp without dazzle and has a 4-hour auto-off timer. There isn’t any automation to turn off if laid on its side or pointed up/down and it is powered by a CR2032 battery. The very outer cap is removable for a battery swap over.

The magnification control collar operates the 5-30x range smoothly with grippy teeth and a throw lever can be installed if desired. There is a fast-focus collar with a -3/+1 range and I adjusted a perfectly crisp reticle picture behind the 38mm lens. Lens caps weren’t supplied but Leica offer a Neoprene cover if desired, these are handy in the cabinet, protecting turrets from other guns and vice versa.

No mechanical motion is perceived when zooming and optical performance was characteristic Leica, bright image and warm colour rendition with defined contrast and flat focus across the field of view without distortion near the edges. I was pleased no chromatic aberration was visible, even in low incoming sun conditions and the tube’s internals minimised reflections.

Reticle subtension is a fine 5mm at 100m, with the illuminated dot building up to a 10mm diameter. High magnification had the expected effect of making the exit pupil slightly more critical. However, the linear ‘eye box’ remained accessible for self-spotting bullet impact through recoil at 15-20x and forgiving for varied shooting positions.

The scope was mechanically accurate with all dialled corrections performing an accurate box test and in use, matching previously confirmed ballistic DOPE on a known rifle.

Leica has thankfully avoided overly complex and confusing turret designs that often add significantly to cost. These are easily set up tactile turrets combined with accurate internal mechanics. I liked the spacious field of view at lower magnifications for more regular hunting needs and the scope wasn’t too bulky. Perhaps the final factor for me was the linear optical performance of magnification in poor light. There was no specific cliff drop off, just a gradual descent without milkiness, and to be fair, a low light hunting scope rarely correlates with 30x magnification and ‘long range’ ideology.

I’d like to have seen the more complex reticles for an impression of precision and ease of reading the inherently important markings on them. I think they will be the choices for true PRS Shooters as FFP is more commonly accepted to allow range finding if necessary and aim off/dial off to correct shots without any possible subtension mistakes. This L-4a is probably a longer range varminting or hunting reticle with image quality that is to be expected from Leica. For competition use, it offers fantastic long range spotting capability through the recoil cycle of the rifle. I don’t think it can be stated strongly enough that shooting reactive steel targets from multiple positions and ranges requires an accessible eye box for physical and optical comfort before, during and after the bullet is released. Leica has certainly done that!