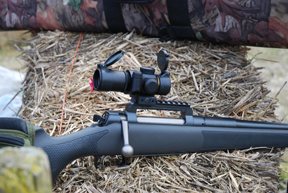 The generic X1 (no magnification) red dot sight has been with us for many years and as a short range system has much to offer, though is not without its limitations! Parallax-free and offering fast acquisition it allows you to keep both eyes open. Most useful (once zeroed) is the fact that as long as you can see the dot anywhere in the view that’s where the bullet will go.

I came to the conclusion that though useful they are better at shorter ranges and also dot size/quality is important. The size is notated in minute of angle (MOA) with 1 MOA equalling 1” as a rule of thumb. For short/medium range use (25-50 yards) a dot of 3-4 MOA is good, as it’s easy to see and place on target yet does not cover (subtend) too much of the view. However, as the range increases so will the subtension.

For example 4 MOA will cover one inch at 25 yards and two at 50, however at 100 this will increase to four, which in terms of precise bullet placement is not so good. So you really have to pick the size as to your major need. Conversely 1 MOA would only subtend 1” at 100 and two at two hundred, so would make a useful, alternative iron sight. But close-in at 25 yards it will only cover ¼” and might be too small…

Equally critical is dot quality! All sights are electrically powered and include a brightness/ON/OFF control (rheostat). This provides variable illumination to suit most conditions; the darker it is the less light is required, but when it’s bright you will need more to see it clearly, so it must be turned up. At this end of the scale it can and generally does flare out from a perfect round circle to a spider-like shape that will not allow precise target placement and might even start to obscure the view.

These variables put me off committing to this system and to be honest I much prefer some form of cross-type reticule as opposed to a dot. However, with my growing interest in driven game shooting it occurred to me that an optic of this type would be very useful. But nothing out there really appealed, until I had a look at Leupold’s Prismatic sight, which is very different indeed!

I had briefly seen them before and thought – just another dot sight, but at IWA 2008 I got the chance to look closer and was most impressed. Though looking like the generic design, with is compact size and 30mm body; the Prismatic is very different and I would term it more an improved hybrid design.

For me the Prismatic offers three significant differences/advantages; first and most unusual is that it does not require power, though it has an optional illumination module included. Second it uses a scope-type reticule that appears black when un-lit, and third the adjuster turrets are full sized so far easier to dial than the tiny things found on all other red dots…

Mounting is by a single, integral 1” Weaver-type base with thumb lug tensioner, a series of riser blocks and screws are included so you can change the height above bore to suit the weapons system used.

The glass-etched reticule consists of a floating cross with an open centre section with a dot inside and a circular ring bisecting the four arms further out. This for me was a vast improvement over a red dot, as it gives a finer sight picture, more precise aiming and the ability to apply precise lead/range corrections.

The full sized turrets are under low, removable caps and offer ½-MOA clicks @ 100 yards. They are easy to operate and show positive, audible movement, with 60-clciks per turn (30”) and six full turns (180”). The objective is 14mm and at the rear is a lock ring focus eyepiece.

Different is the illumination module that consists of a split ring clamp that sits around the rear body tube that aligns by an integral lug. On the right is a vertical drum that holds the battery and rheostat control. The module - though included as standard - is optional, as the reticule is black so can be seen in normal light and when lit appears red.

There are eight levels of illumination, which is a bit different to the drum-type systems. Pressing down on the rubber-covered button on top turns the unit on and off and also adjusts the intensity.

It’s here where things differ as these operations are timed. When you turn it on you need to press the button within one second to turn up the illumination, if you hold it for two seconds it will turn off. Once set to the level you need and turned off it will come back on again at the same setting. However, you can only go up on the adjustment, so if you want to turn the illumination down you have to cycle through the levels until you get back to minimum then start again. I’d be the first to admit that the two-way, rotary rheostat drum system of other dots is a bit easier, but the pre-set ability of the Prismatic, once understood, is useful too.

The other major difference of the Prismatic to other systems is the fact that it’s a pure rifle sight in that it needs to be near the eye to get a full and proper sight picture, so cannot be mounted forward on the barrel as a conventional dot can.

I used the Prismatic on my Mauser M 03 (8.5x63mm barrel) and my SGC Speedmaster AR15. On the former I fitted the lowest base setting due to the M 03’s high Picatinny rail, on the flat-top AR I had to increase the height of the mount to get a comfortable eye/scope line-up. I found the proper reticule far more practical than a dot, with illumination usable throughout the range and no serious flaring out at higher levels.

Given the Mauser is a hunting gun you can push it out to 100 yards on a static target and it will keep the shots inside a four inch rectangle, which is good enough. But for closer range moving targets like boar up to 50 yards for me it’s ideal, as the cross allows me to calculate and apply lead easily and maintain that hold as I swing through and shoot. Likewise on the AR15 as an alternative to standard iron sights on Fig 11 targets it allows you to reach out to 300 yards with greater ease. Equally up close you get the fast target and placement of the red dot sight too.

We Reckon:
• A practical alternative system
• Rather expensive
• Cross better than a dot