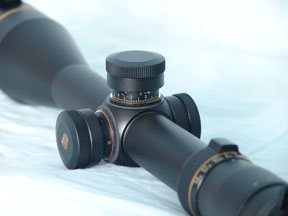 I have to say that I like Leupold optics and over the years have used and owned quite a few of their models, so much so that I would stick my neck out and say they are probably the best of the US optical manufacturers in this area. Their latest VX-7 range was launched this year and, as ever, displays the high quality build and features we have come to expect from this company.

The VX-7 range are firmly aimed at the hunter with five models available – 1.5-6x24, 2.5-10x45, 3.5-14x50 LR, 3.5-14x56 LR and 4.5-18x56 LR, these last three being classed for long range use (LR). In some ways Leupold have kept things simple as there are no illuminated reticules and only three, initial choices - XT Duplex, German #4 and Circle Dot. Though their ballistic aiming system is also available for the LR models with either their Boone and Crockett™ Big Game and Varmint Hunter patterns. These offer aim points as to calibre selected and also lead.

The three LR scopes feature side focus and all models show Low-profile SpeeDial™ turrets, which are in keeping with the modern trend for target-type, hand-dialling turrets but in a protected and easy to access format.

I was sent the 3.5-12x50 LR with XT Duplex reticule by the UK importers (GMK Ltd). The build recipe is good with a 30mm body tube and the new Xtended Twilight Lens System, which uses lead-free glass and new Diamond Coat 2 scratch-resistant coatings. This optimises the transmission of low-light wavelengths and generally gives greater/brighter detail, and this certainly appears to be the case as was evidenced by its good dawn and dusk capability.

The XT Duplex is another clever design as it first appears quite thick in the view and has blackened lens edges, which reduces light diffusion, so more usable light reaches the shooter’s eye, for a brighter image with a higher resolution. In use the cross worked equally effectively for both long and short range targets and was precise enough for consistent aiming needs.

New for Leupold are the turrets, which offer a mid-height, fully capped (hunter-type) drum. However they unlock to allow the adjuster to pop up for easy and precise finger dialling. This system is also used on the parallax/focus drum too and at no time can the outer cap be removed, so one less thing to worry about.

The turrets offer ¼ MOA @ 100 yard adjustment, with 80-clicks per turn (20”) and 2 ½  rotations from top to bottom (50” in all). Elevation is marked out in 20 main increments (1 MOA each) that are sub-divided into four (1/4 MOA). Windage starts in the middle at 0 with 10 x 1 MOA divisions either way. I quite like this notation as once you have set to zero and need to dial in a horizontal correction the marking are easy to understand and apply. Once zeroed the turrets can be slipped to zero by an Allan key and the caps screwed down, which takes about one turn. When you need them unscrew them and they will pop up, then lift up to their engaged (dialling) position. If you favour this sort of system in the field then these lock or lift turrets are most efficient…

Parallax/side focus is done exactly the same with the drum marked 50, 100, 200, 400 and infinity. The 4X, dual spring erector system is designed to withstand heavy recoil. This should result in eliminating erector system backlash and stress on the internal workings.

The VX-7 range offers two finishes - satin black or the new satin grey and comes fitted with Leupold’s Alumina front and rear, pop-up lens caps, which are just plain nice… At the rear is a fast-focus eyepiece and the magnification ring shows grooves and a raised lug for easy dialling. Finally all scopes in the range are covered by Leupold’s Full Lifetime Guarantee and the VX-7 Custom Care Package.

The VX-7 proved its promise with a bright and crisp sight picture and a good dawn and dusk ability. The magnification range makes this 3.5-14x50 worth serious consideration for those who want to push the envelope for longer and more technical shots, the bottom end at x 3.5 is useful for close in work too. Personally I would go for the same spec but with the wider 56mm objective, but varmint shooters will probably opt for the 4-18 LR. On that point Leupold use their low profile (VX-L) objective shape that is concave at the base so this big 56mm lens can sit lower on the rifle

Though I’m not a big fan of dialling in corrections on a hunting scope the way the VX-7 approaches this ability is most practical, as it’s equally possibly to leave the caps in their (open/adjust) position with no problems. Certainly not that different to using Leupold M1 turrets. The only place that I think something has been left out is on the 1.5-6x24, which is in reality a dangerous game or close range option. Here I would have liked to have seen an illuminated reticule, which could have been positioned on the left of the saddle.

But overall, and from the model I tested, another well built scope from Leupold, with excellent optics and some clever and practical innovations. Price-wise well as ever you’re paying for it, as the 3.5-14x50 LR is just shy of £1400…