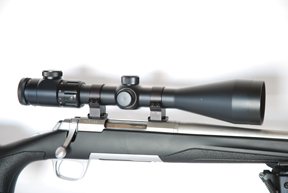 Given the title you are certainly going to stop and take a second look at a Luger scope purely for the fact it’s the name of possibly one of the most famous semi-auto pistols of all time. However despite being based in Germany and having more than a hint of the Teutonic about them, the Luger Optik range is made in the Far East.

The build looks good with a 30mm, one-piece body tube. At the rear is a fast focus eye piece with the rheostat at 12 o’clock. The scope comes pre-parallaxed and shows low hunter-type turrets under removable caps. Click values are ¼” @ 100 yards/1cm @ 100 meters and the adjusters have a low, raised bar for dialling.

Movement is generous with 60-clicks per turn (15”) and six full revolutions, which at 100 yards gives a top to bottom of 90”. The adjusters are marked with individual lines but there’s no 1” sub-divisions which would have been useful. Though there is a decent reference point on the rim of the turret.

The dialling lug is not that easy to get your fingers on and could have been a bit taller, equally the click noise is low and the individual movement between them is not that distinct. However, they are fire and forget turrets, so once set up on the range, there’s no need to be messing with them out in the field.

The 2nd focal plane reticule is what Luger calls a 4A+LP and is well executed with a medium/fine inner cross at 3, 6 and 12 o’clock with heavy/square outer bars at 3, 9 and 6. There is a reasonable width and depth on the inner so you can easily bracket the target without losing it in the thicker outer sections.

The rheostat is the standard drum-type and only offers four positions (including off) which are noted by three white dots of increasing size. Used as most of us are to an 11-setting or seamless system I was not sure what to expect, but in truth the three levels, which are really for low light work did very well. Plus the lack of choice means it’s easy to remember how they look and select them quickly too.

What I also liked was the fact the red dot is only projected into the very centre of the cross hair and when on does not expand out past it, so offers a decent aiming point that does not expand/flare or lose precision.

Generally the scope worked well in normal conditions with the reticule width proving ideal for deer work, as it stands out well yet is fine enough for precise placement. If I had one complaint it would be to the rather slippery magnification ring, it’s not rubber-covered and the slots around it’s edge don’t offer a lot of hold for your fingers and its worse with gloves on.

That aside not a bad scope at all, with a useful spec for the UK hunter and at a reasonable price too.