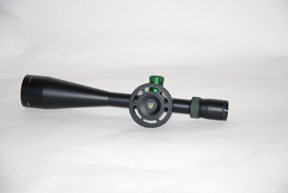 Haven’t they done well? I speak of course of Nikko Stirling, who have definitely re-established themselves in the UK over the last year or so, mainly down to the efforts of the new importer -John Bright (Highland Outdoors). I used Nikkos as a lad but rather wrote the name off as I grew up, as in my view there was better out there and I pretty much left this brand to the airgunners. Until that is I did a follow-up review on their 6-24x56 Nighteater from a firearm’s user’s perspective and I have to say that I was pleasantly surprised by what was on offer and the price too. Performing way above expectations in terms of useable distance and general ability.

However, though hi-mag variables such as the 6-24 are not really what I do, I have here Nikko’s biggest model - the Diamond 10-50 x 60 with the new Nato reticule. Certainly a little specialised and more the realm of the serious Field Target or precision shooter, but let’s take a look anyway.

The 10-50 x 60 Diamond is easily recognisable, as it’s huge with its green anodised, capped target turrets and rubber gripping band of the same colour on the magnification ring. From my view it’s aimed squarely at competition Field Target use with 30% of the field in the recent USFT (United States Field Target) national competition choosing this model.

The build is essentially two-piece with a 30mm, one-piece body tube and that massive 56mm objective lens bell housing screwed onto it. The saddle is large and shows tall, capped turrets. Underneath are hand-dialable drums graduated in 1/8” @ 100 yard clicks. These are divided into nine with each section further sub-divided in eight, giving 9” per turn with a shade under six full turns available (50” +) top to bottom.

Both windage and elevation movement is identical, the only difference being in the turret and drum markings. On the former the drum starts at 0 and goes out to four in each direction, with the turret being marked in 0 (middle) position with 1, 2, and 3 either side of this. Essentially one main division on the turret equals one full rotation or 9”. This I found very useful as it makes it far easier to dial in wind correction, which is a variable at the best of times.

Elevation show the moving drum section marked from 0 – 8 though annoyingly Nikko have chosen to use the same turret markings – 3 2 1 0 1 2 3 as windage, which seems lazy to me given this could make it easier to get lost in elevation when you are dialling in a range correction. Movement is smooth and though you can hear the individual clicks well enough; you do need a light touch so you don’t over run. Naturally drums can be slipped to zero with an Allan key provided in the package.

Moving back; the magnification ring is wide and deep and easy to manipulate. In terms of movement it travels from 12 to 7 o’clock to go from 10 to x50, again not a problem to use. Finally at the rear a fast-focus eye piece, which is useful for this sort of optic, given its main role is target-orientated. This will allow a pin sharp reticule picture, with the side wheel being used to get the target crisp.

The blurb says that all lenses are made in Japan and of camera quality and fully coated. Comparing them to the glass on the Nighteater shows them to be of equal ability, which I found to be good, even in lower light conditions. Plus that big, 60mm objective is going to let in an awful lot of light.

This brings us on nicely to the reticule, which is set in the 2nd focal plane. Nikko Stirling call this a Nato-style. The basic shape is a #4 with three wide, short outer posts at 3, 6 and 9 o’clock with a fine inner cross coming down from 12 o’clock. In the lower section is a multi line range finding grid, here targets are vertically bracketed. The main cross hairs are divided up into sections that correspond to various full and fractional MOA values and can be used to give certain height corrections at different distances. Problem is I can’t tell you what they are, as the information on the website does not give the actual measurements; despite the fact that it says it does. However, I’m sure a call to Highland Outdoors would get you up to speed on this.

Being 2nd focal plane you must be aware that as the magnification is changed so will the subtension values. But for the FT shooter I don’t suppose it makes a huge difference, as from what I can gather a fine plain cross hair is preferable, with precise corrections being wound in with the 1/8-click turrets.

Though far too big for what I mainly do, the attraction of this big Nikko is in its high end magnification and precise dialling ability. Though as ever you are going to run into problems with eye relief and head/scope mount unless you are using a stock set up that can accommodate them, which is very much the premise of FT hardware.

Overall an impressive, if mission-specific scope and one I can see being ever more popular on the competition circuit…