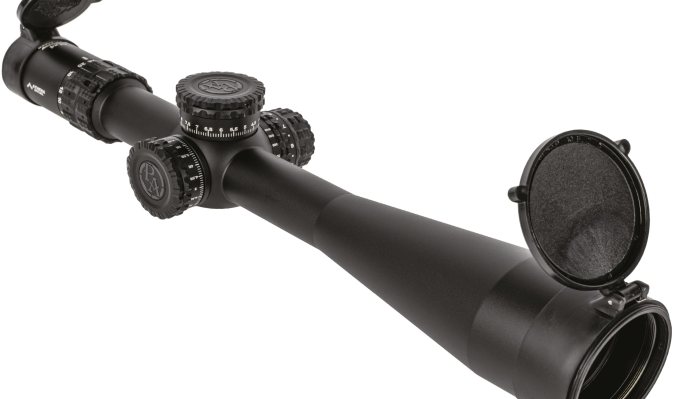 Sportsman Gun Centre recently added a new brand of optics to their product portfolio, and I got my first look at them in February at the British Shooting Show. Primary Arms (PA) is based in Houston, Texas and seem to have taken the market head on with a pretty bold mission statement. “Our mission at Primary Arms is to provide the world with the best shopping experience possible by offering quality products, the right assortment of merchandise, and world class customer service, all at affordable prices”. I am pleased that I have got the opportunity to have a look at this new brand and am curious to see how they fit into what can only be described as a pretty competitive market!

PA have a lot of models to release and, to make the product structure clear, they have separated them in four tiers, which include; Platinum (PLx), Gold (GLx), Silver (SLx), and Classic (CLx). The scope on test is the GLx-4 6-24x50 FFP (First Focal Plain) which as the name suggests, is from the Gold Series, which includes a 2.5-10x44 FFP and 4-16x50FFP. All three are designed in the USA and made in the Philippines, outsourcing to production facilities outside the USA is a very common policy these days in the optics industry.

The Gold series uses good quality, fully multi-coated low dispersion glass, which is competitive with other brands in the same price range. PA have worked hard to give edge to edge clarity and to offer a generous eye box, which helps when trying to get a clear and correct sight picture. From first impressions, I think they have done a good job. The model on test comes with a pretty standard matt black, hard-coated, anodised finish and offers a magnification range of 6-24x. It is built around a 30mm main tube with a 50mm objective and is clearly aimed towards the long range shooting community.

The illumination system is powered by a single CR2032 battery and includes 10 brightness settings with OFF positions in-between each one. It is controlled via a rheostat but includes what PA are calling AutoLive technology. The system uses a mechanical motion switch consisting of a positive and negative contacts and a spherical ball that rides on top of them in tube. This is because it draws far less current than a traditional accelerometer, increasing battery life. If the rifle and scope is left stationary for more than three minutes the reticle illumination automatically turns off. The moment it detects movement, hey presto it’s back on in an instant at the same brightness level previously selected. I really liked this system, it worked well and would be welcome on all my scopes! The rheostat is attached to the side parallax, which shows increments from 25m.

The elevation turret is of good proportions, measuring 2.5cm high from the main body, with a diameter of 4cm. Markings are in 0.5 increments and includes rotation markings. It offers an adjustment range of 0-18 Mils in 0.1 Mil clicks with 10 per rotation. The new design boasts some nice design features too, which I liked. These include a silver sprung button, which is part of the Zstop return-to-zero system, located above the zero position. It has to be depressed before the turret can be rotated to add elevation, a system that has been seen before on some Leupold scopes. Interestingly, they have included the ability to activate the button and go 4 clicks below zero, which is always useful. All in all, it makes returning to zero a doddle and minimises the risk of making accidental adjustments when out in the field.

Internally, there have been some changes as well, as all the traditional brass internals have been swapped out for stainless steel, whilst click mechanism uses hardened steel. The idea being that the clicks will be accurate and will never wear out! The windage turret is marked up with 5 Mils of adjustment either side of the lock, although my example in fact offered up to 8 Mils each side. I was pleased to find the numbered markings also included L and R for direction indication to help avoid confusion. The windage carries the ZLock designation, which is basically the same as Zstop but does not include the ability to go below zero, as it’s a feature that is not needed in this plane. Otherwise, the upgraded internals and push button are all the same.

There are five different reticle options available, all of them are only available in FFP, which is ideal, as this means that the subtensions remain accurate throughout the entire magnification range. The options include; Mil-Dot, ACCS-HUD-DMR-.308, HERABPR- MOA, ARC-2-MOA and ATHENA-BPR-MIL. The latter featured on the test scope and is a good choice for long range use. A floating chevron measuring 0.1 Mil high and wide acts as the central aiming point and this is immediately surrounded by dots on both axis in 0.2 Mil increments. These are then complimented with 0.1 Mil sections before showing the larger 0.5 and 1 Mil subtensions.

At the 6 O’clock position, there is a holdover grid, that shows dots at 0.5 MIL intervals, extending 15 MIL down the vertical axis and 6 MIL to each side. All of this stays in view up to 10x mag, but at 24x, what you see is restricted to 5 Mils of marked reference points on both axis. In the top right section, they have included a ranging ladder selection. The illumination highlights the entire reticle, a feature that boils down to personal preference. I liked the pattern, although my preference would be to show values for the immediate subtensions to the left and right of the chevron. It is also worth noting that, as with all FFP scopes, the ret is very fine, which is good at high magnification, making it precise. However, at below about 10 mag on this optic it was of limited use.

The elevation and windage drums demonstrated nice tactile feedback, with just the right amount of resistance and crisp audible clicks. The turrets, parallax, and zoom ring featured significant metal knurled surfaces for grip with the latter two giving a consistently smooth resistance during rotation. The fast focus and rheostat have a rubberised, knurled surface, with the rheostat proving to be on the stiff side, but I am sure that would loosen up with use. The magnification ring also included a raised fin at 16x mag to add leverage and there are also four tapped holes to accommodate a zoom lever from PA, which is a nice touch.

I opted to mount the optic to my Mossberg MVP in 223 Rem, using their extreme clamping system (ECS) which is compatible with the rifle’s Picatinny rail. These particular mounts are designed to be safely and repeatedly torqued to 65 inch pounds, providing an impressive 2000 lbs of clamping force per cross bolt! Although this specific set is a design more suited to an AR15, I have an adjustable cheek piece, so gave them a go. On the range, I found it easy to get a clear image using the parallax and fast focus and certainly noticed the generous eye box. However, it was clear that from the outset I would have to use a decent amount of magnification to make the reticle big enough to see clearly. The chevron aiming point is very fine too, so it is worth taking this into consideration, as it won’t be to everyone’s taste. The AutoLive feature was spot on and worked really well, which is important, as I think most people will end up using the illumination a lot. There was also the bonus that it was bright enough to be used during daylight hours as well, which is a great move by PA.

Zeroing and setting the zerostop requires two different sized Allen keys and a screwdriver, which is not ideal. Unfortunately, my example did not come with its tools and it proved particularly hard to find the correct sized keys anywhere! The turret cap can be removed by loosening three grub screws, exposing the internal mechanism. The process of setting the turrets contains quite a few steps and you will certainly need the instruction manual the first time you zero. However, once setup the whole system worked very well. Importantly, I was pleased to find that the Glx tracked very well, and if you prefer not to dial in corrections then the comprehensive holdover grid has you covered!

Overall, I was surprised by the GLx4 6-24x50 FFP and the more time I spent with it the more I liked it. Although a bit complex, the turrets work very well once set up, with clear, well-spaced markings, audible clicks and 10 Mils per rotation, which is always nice. It is worth taking into account the amount of elevation adjustment is slightly on the low side when compared with the competition but there is still plenty for most needs. As a whole, it well made, fully argon-purged, and IP67 water and dust proof and comes with a lifetime warranty. Crucially, the price is right at £873.99!