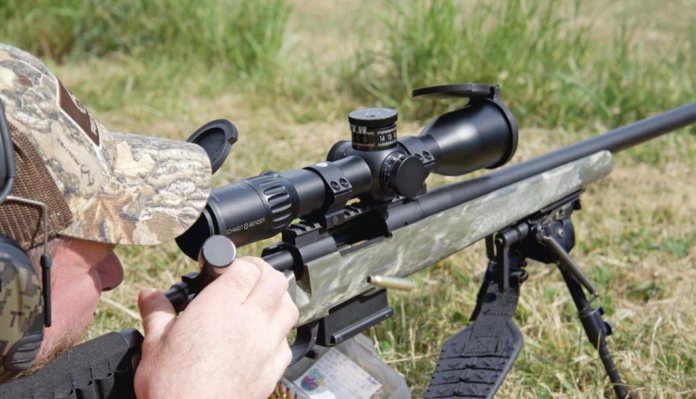 Schmidt & Bender’s EXOS is intended to be a long-range hunting scope prioritising superb mechanics alongside daylight priority, if not quite their premium levels of light transmission, here 90%+ whereas their low light Polar range assures 96%. The body tube is 34mm, although a European Rail mounting version is also available. The 50mm objective and short 430mm overall length keep the rifle package as compact as possible, I used Sportsmatch rings for a lower mounting position on the rail of a Varmint rifle appropriate to utilise more of the dialling capabilities.

The second focal plane (SFP) D7 reticle shows an illuminated centre dot with less of the technical information usually associated with a long-range dialling scope; no hash marks or measuring stadia in the lower quadrants, so keeping the field of view clear for fine detail. Illumination is appreciated through daylight hours in broken cover whilst still allowing a fine reticle for precise aiming. There’s a large parallax dial on the left of the large saddle for precisely sharpening the image from 25m to ∞ without backlash.

The new turret option for fast, tactile use complements the scope’s long-range hunting ethos well. The STII-B (single turn, ballistic option) features distance markers that can be externally positioned without making changes to the underlying base zero. I’m no fan of turret designs that need excessive underlying component removal that can lose base zero easily. Yes, S&B’s approach might be criticised as being a little bulkier but given the precise technical edge the company have always applied to their optics rather than hunting romance; I like the no compromise approach.

This scope had a CCW rotating mRad turret with 1cm @ 100m (0.1 mRad) clicks (clockwise is optional) on the elevation turret, which is 40mm in diameter and stands 27mm high. It offers a hand-filling grip rather than just fingertips and regardless of how cold and wet your hands get, it’s very tactile. Mechanical feel of the clicks is first rate, fast movement, firm detents without soft edges and minimal chance of overrun, plus visual hash marks are truly aligned to the mechanical detents within.

A locking lever on the front left of the turret shows opposing green/red window on the rear right to display if dialling is enabled or locked with 14.5 mRad (145 clicks) extra elevation on command in a single turn. Entire mechanical elevation adjustment is 43 mRad (430 1cm clicks). The windage dial is capped with smooth threads to freely spin it on an off. Accessible factors like this illustrate machining standards throughout S&B’s products and the dial within is marked 6 mRad (60 clicks), left and right of centre once zeroed. Illumination has 11 intensity settings, integral CR2032 battery and a non-detented OFF position between each increment so you can quickly return to a previous choice.

There is no ‘bleed’ or glare from the central dot’s brightness which now features a time and positional auto-off function to conserve battery life. Magnification is controlled by a knurled aluminium collar with -3/+2 dioptre control at the eyepiece for sharp reticle focus. Tenebraex caps are supplied for both objective and ocular lenses and these are of the highest quality, a rubberised texture that remain firmly closed unless deliberately opened. They fold flat and resist damage from bumps and bangs with their tough polymer construction.

Field of view (FOV) is 13-1.9 metres at 100 metres through the magnification range, it is flat with no visual disturbance at any point across the span. The 40mm ocular lens somehow looks even larger and inviting within its smoothly anodised body, giving a broad exit pupil with generous box around 90mm eye relief. It’s noticeable how easy it is to maintain sight picture, although, like most premium optics, less magnification is usually needed for precise imaging due to the first class optical target resolution. At full mag, I estimate I had 10-12mm of linear movement, still maintaining full field of view without any intruding vignettes.

Initial zero is set up on either turret by loosening the grub screws on its perimeter with a supplied Allen key and turning to set both visual marker and zero stop. It still ‘clicks’audibly as you turn, I like to look through the optic as I turn it to be sure I have slackened them all satisfactorily. There is a third grub screw in the turret sealed with silicone type adhesive and mine needed this removing and releasing too, so just be aware you might have to do all three.

Setting up the six distance markers uses a supplied Allen key, which without altering the underlying turret mechanics, allows each of them to be is loosened and tightened back in place exactly where needed. Remember; 1,2,3,4, & 6 are unlikely to be fine enough for precision or extended target shots, but the concept can be tailored exactly as you want it for larger game hunting with each individually adjusted. I much prefer this to an engraved dial that might not match your ballistic curve, unless specifying a custom unit at added expense. The pointers are neat, but still tactile and they do not snag so the size/shape compromise has been well thought out

EXOS and STII-B EXOS testing for this review have spanned all four seasons. Especially noticeable is how the broad mechanical specification has been tallied to forgiving optical highlights for hunting. I say now, this scope is not too Tacticool, or alternatively, trying to make long range look as simple as using an ‘App’. S&B have supplied a tool for a job, not an aspirational teaser. Bright sunsets have failed to create flare in the lenses when shooting toward dusk and there has been no binary ON/OFF type functionality from the glass, so easily noticed when mechanics and high mag are prioritised.

Colour balance was rich, slightly less bright than the high 96% transmission S&B Polar series. Yet I found the diminishing light capability of the Exos to be linear with a gradual fade corresponding to external conditions, no sudden drop off in performance with a distinct limit to chosen magnification. The scope remained pleasing to use at all magnification settings and although lower mag and larger exit pupil will always win out with any scope, that lack of colour shift towards the top end of the zoom in low light was appreciably superior. The illumination dial does rob some premium body tube length for mounting versatility, so I would advise not all rifles will accept the scope comfortably and a Picatinny rail is a definite benefit.