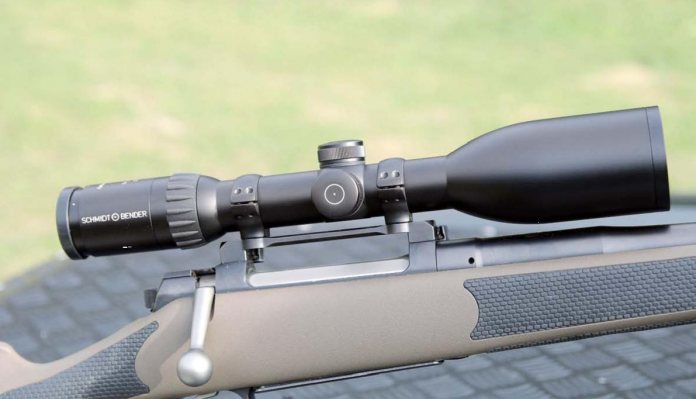 I think my first understanding of what German optics could offer was back in the 1980s, before I got involved as a gun writer! I’d never heard of Zeiss and could barely pronounce Swarovski! But as a novice Practical Rifleman, I noted that regardless of the top shooter’s choice of self-loading rifle, they all seemed to favour a brand called Schmidt & Bender. I aspired to S&B but could never afford it, but it left a lasting impression in my mind about quality; and as the old and true saying goes, buy the best scope you possibly can!

Compared to the sort of optics I could afford, looking through a Schmidt was like coming out of a dark room and stepping into the light and let’s not forget image quality! Nearly 40-years later I’m on first name terms with most of the big European scope manufactures and have an eclectic mix of their products on my own guns. Why? Easy, they are top-quality and given you do your bit, will allow you to do it longer and better.

I think it was in the early 2000s that Schmidt launched a new range of hunting scopes called the Zenith, which, design-wise, was a step forward from their earlier models. With subtle re-jigs of the magnification ring, their most notable feature was the long objective bell with its curved shoulders, which always put me in mind of a MagLite torch. Still in the first focal plane (FFP) the majority of Brits still had yet to get their heads around that feature, they were a top-quality product!

The Zenith comes with the option of illumination or not, which also dictates reticle choice. The non-lit models offer four; A1 three thick posts at 3, 6 and 9 o’clock, A4 - three thick outer bars at 3, 6 and 9 o’clock with a finer inner cross coming down from 12 o’clock. The A7 - identical with a wider inner cross hair and the A9 - like the A4 but with a fine circle on the intersection of the thick and thin posts. Lit – Flash Dot; FD4, FD7 and FD9 are identical to the A4, A7 and A9 apart from a centre red dot. Finally, the FD1 – three thick outer posts with the 6 o’clock coming to the open centre with a dot on it. These are controlled by a drum-type rheostat on the left of the saddle that gives 0-11 positions with night and day setting plus a switch off point in the middle of the run.

The finish is a semi-matte black with silver markings. The magnification ring is rubber with tapered fins and at the rear a fast focus eyepiece. Click values are 1cm @ 100m, turrets are low hunting-types under screw-off caps, but have Schmidt’s unique, Posicon turret position indicator system. This incorporates a dial with a circle split into 2/3rds green and 1/3rd red sectors. As the scope is dialed, the pointer moves to show how much movement is left, as in green available, red not available. There’s also a slip ring around the circumference that allows you to set a 0 position, should you want to dial up. There’s a spare battery for the rheostat in the extended windage cap too.

Both turrets offer four compete rotations with the drum divided into 34 x 1cm clicks, that’s 134 cms top to bottom, or 54.5” in old money, about right for a hunting scope!

Most pleasing for me, is the finer reticle on the Zenith, which offers a far betterbalanced magnification size. FFP scopes increase the size of the reticle and target together and depending on that ratio you can end up with a very thick post to contend with. But the A4 on the Zenith is equally useable at x3 as it is at x12, without the massive thickening my Klassik shows at x12. However, and in fairness, in low light you never lose the reticle, which is why I like it!

Optical and build quality are excellent, as you might expect and in truth this is a true hunting scope from dawn to dusk; with nothing to worry about, as all you need to do is zero it and work out your drops and you’re there! The magnification range covers most needs with a practical top end. Another bonus is the price, with a RRP of around £1700, I have seen this model and others at around the £1500, which is a big attraction when compared to the other big German and Austrian companies.