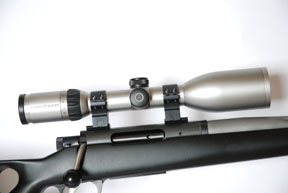 It’s funny how some things tend to pass you buy, one of which for me was Schmidt & Bender as I have not had a lot to do with this company for some time. As we are aware, this is a well respected name in the rifle optic business, so I thought I would redress the balance and now have three Schmidt’s lined up to test. The real difference with this brand is the fact they make most of their scopes with the reticule in the 1st focal plane. This simply means that on a variable power model as you dial the magnification up/down the reticule gets bigger or smaller accordingly.

This offers both plus and minus points, as we shall see! Though these days with the majority of variable scopes using 2nd focal plane (reticule stays the same size no matter what the mag) the S&B system does seem a bit dated. On the plus side you need not worry about a zero shift when dialling and also for the serious Mil-Dot user it allows you to Mil the target at any power setting. However a 2nd focal has to be set at a predetermined magnification!

On the minus side the reticule can appear really large in the view with it’s outer edges disappearing at the higher powers. This in a hunting scenario gives what I feel is a large and cumbersome aiming point that lacks precision at top end magnification. Conversely when you are set at a low power the cross almost disappears; making some form of illumination near mandatory.

S&B offer two distinct build-styles. Oldest is the Klassik with its familiar, angled objective bell. Newer is the Zenith that shows a rounded objective, which gives all versions the look of a large torch! So I thought I would kick off with this design in a spec of 3-12x50, which as a hunter I consider ideal, as it’s versatile for close or long shots.

This example came in a silver finish, which is the other option to black; frankly I do not like the look - certainly not for a hunting rifle. Cosmetics aside the Zenith is an S&B through and through, with the high build quality showing it’s pedigree. The body tube is 30mm with a one-piece construction, at the rear is a European (fast-focus) eyepiece. The magnification ring shows a wide, ridged rubber section with dialling being firm yet smooth.

Turret are low hunter-style, under removable/waterproof caps, with S&B’s now familiar integral, reticule position indicator gauge. This by means of a pointer shows approximately how much correction/movement you have available. Two thirds of the dial is in green (indicating useable movement) and one third in red (running out of movement). This can be useful, especially with adjustable mounts as if you are having zeroing problems it will allow you to move the scope in relation to the rifle to get more adjustment back.

This being the Flashdot version there’s a drum-type, 11-position rheostat on the left of the saddle for illuminating the reticule. Though the higher the number the brighter the illumination, Schmidt has marked the drum with a moon and sun symbol to indicate lower and higher brilliance settings. For example at night (moon) you need very little illumination, whereas in daytime (sun) you need more. As ever the rheostat is switched off between setting, so you can pre-set a level of brightness then switch it off with just a tiny movement to turn it on when required. This is far more practical than having to dial up from 0!

Sensibly only the centre of the cross is illuminated. Power is supplied by a coin-type battery with a spare held in the taller turret cap. This is a common feature theses days; however, I found the spare is very hard to get out!

The elevation turret is marked T & H (up & down in German) and D & U (down & up in English) and windage L&R which is the same in either language. Click values are 1cm @ 100 metres with 34 per turn and approximately four, full revolutions available; given the reticule is centred. If for example you run out of correction in say windage then elevation will lose about a ½-turn overall.

The reticule on this example is what I call a generic #4, Schmidt call it a No.7. It has a fine cross in the centre that extends up to 12 o’clock and thicker arms on the outside at 3, 6 and 9 o’clock. Given the Zenith’s 1st focal plane I was expecting problems at higher magnifications, but was pleasantly surprised.

At X3 the inner cross hair is very fine, especially in low light and dark targets or backgrounds, so illumination is near essential. However, when wound up to X12 the cross does not get a lot bigger and at 100 yards offers a fine enough aimpoint for precision shooting. For my old eyes I found that the cross was good enough from X12 to X5 before having to consider illumination, so I had a recognisable aim point!

Low light ability is very good indeed. I fitted the 3-12 to my 17HMR, Ruger M77/17 All-Weather and took it rabbit shooting. As the light dropped the optical performance was brilliant and under the moon I was able to spot and hit targets without a lamp. In fact it also got me a fox, which I called in to 100 yards; again without a lamp, though by this time I had the dot on…

I have to say I was more than happy with this scope and its No.7 reticule, which despite its 1st focal system proved most practical. However, and as we shall see in the future; the 3-12x50 Klassik, which is also on test shows a much thicker ret, which does present its own problems, which however are not insurmountable…

This scope is available with or without the Flashdot system, which will add £286 to the bottom line. However, given the current prices of top quality European optics; this example still comes in at around £300 cheaper than some of its competition, which does make it attractive.

Thanks to Tom Bullock for arranging the loan of the scopes

We Reckon:
• A 1st focal/reticule you can live with
• Good money for quality glass
• Superb low light performance