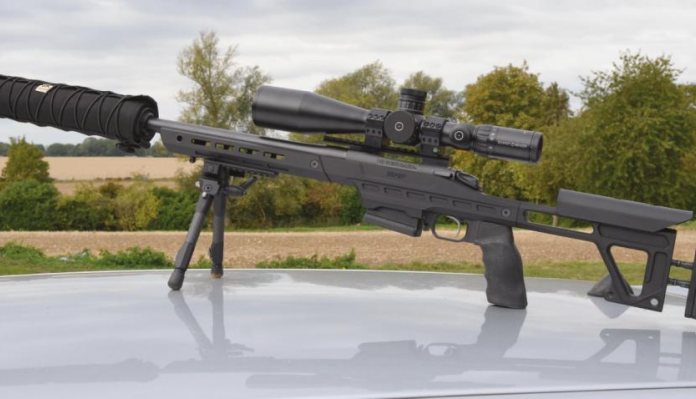 The Schmidt & Bender (S&B) PMII rifle scope has been around for some time now, yet over the years it has been tinkered with and improved. There are numerous incarnations and a wide selection of options, like reticle and turret type, standard, ultra-short or high power versions, far too many to list! I was offered the opportunity to test one of the most popular models in the UK, the 5-25 x 56. Specifically, the PMII LP MTC LT/ ST ZS LT, which I shall translate later! However, it is not just the scope on test but the brand new LRR-Mil reticle.

This PMII uses the highest quality glass as per normal S&B spec and needs no introduction. It offers a magnification range of 5-25x and is built around a 34mm main tube with a 56mm objective, all with a matt black finish. The ‘LP’ designation denotes an illuminated reticle powered by a CR2032 battery with 11 brightness settings controlled via a rheostat, as well as side focus parallax. It shows increments from 10m - ∞.

The elevation turret offers an adjustment range of 0-26 Mils in 0.1 clicks and carries several important designations; MTC LT DT ZS (More Tactile Clicks, Locking Turret, Double Turn and Zero Stop). The double turn design allows the entire 26 Mils of adjustment to be used in just two rotations. When 14 Mils is reached on the first turn, a tab raises from the centre of the turret to signify to the user that they are now on the second and should read from the top line of markings covering the remaining 12 Mils. Very clever indeed!

MTC means that every 1.0 mil of adjustment carries a weighted feeling, giving the user a physical indication of the movement. The ability to lock the turrets once an adjustment has been made avoids accidental movement. This is controlled via a push ring, positioned around the central circumference, which, when applied, reveals ‘LOCKED’ to keep things obvious for the user. This position also exposes two Allen screws that can be used to set zero in conjunction with the zero stop feature. Windage is a single turn, which offers 6 Mils of adjustment in 0.1 clicks increments in each direction, both clearly marked left and right. MTC is not included, but the turret can still be locked and zeroed in the same manner as the elevation.

S&B created a bit of hype when they announced the release of their newly designed LRR-Mil milliradian based intelligent reticle last year, as a result of consultation from ‘tactical communities’. Its purpose is to offer an updated, non-cluttered, easy to reference and more intelligent mil-based reticle with proper aiming and ranging capabilities. I was advised that it will be offered in first focal plane (FFP) and will eventually be available on four of the PM II models. The 3-20x50 Ultra Short, 3-27x56 High power, the 5-45x56 High power and of course the 5-25x56.

Immediately apparent is how fine the reticle is; at the centre is a very small floating dot that measures just 0.02 MRAD/0.16cm at 100m. This is surrounded by an interrupted floating cross with the sections measuring 0.1 MRAD/1cm at 100m. It is these that can be illuminated and, in my opinion, a key requirement in the design, more on that later.

S&B have included magnification indicators for 8, 10,12,15 and 20x in the bottom right of the ret. These are made up of a series of marked arrows that sit at the edge of the field of view (FOV). The appropriate marking displayed depending on the magnification currently in use, a nice feature ridding the requirement again to break eye contact of the target in order to find out the magnification setting. There is a wide variety of measurements including a ranging scale in 1 and 0.5m increments in the bottom left of the ret. The commonly used vertical and horizontal subtensions are marked, making the 0.5 and 1.0 MRAD measurements obvious, as well as a huge array of others; too many to list in this article! They do offer a PDF download of them all on their website, which is doubtless useful.

All the controls offered tactile feedback in the form of crisp clicks on the turrets and rheostat, bar the magnification ring and parallax, which offered consistent, smooth resistance when rotated. The main turrets, parallax and rheostat all have a minimal knurled surface around their circumference, enough to aid deliberate adjustments but not too much for accidental operation. The mag ring is knurled and rubberised with a slightly more pronounced piece at the 10x mag position.

When in use, the turrets took a bit of getting used to, as a result of them being highly torqued and having so much adjustment per rotation. The 0.1 Mil clicks are very close together and, when combined with the MTC higher resistance/torque level, can lead to overshooting an adjustment. However, with practice, this became far less of an issue, especially when compared to the advantages of all that adjustment in just two turns!

Performance in the field

I used Tier One Tac rings to mount the scope; it is worth mentioning that the position of the rheostat limits space for rings, so take that into consideration when choosing mounts. From the outset, the clarity of the optics was superb, no doubt due to the 90% light transmission. I was not left wanting, with high levels of resolution, contrast, colours, brightness and sharpness. However, this quality of optics was not a luxury; in regard to the new reticle, it was now a requirement. The LRR-Mil ret is so fine and detailed, especially the centre dot/ floating cross combo, that I believe it would simply not be usable if used with inferior glass, I viewed targets without illumination out to 1000m. In focus, the reticule in pin sharp and allowed for some precise aiming, however as soon as light and weather conditions moved away from optimal, that tiny centre dot could get lost.

Here I found myself using illumination more often than not, to try and compensate for this and would say that it was 100% required to make the most of this reticle in all conditions. Luckily, the 11 settings are generous, with the brightest designed to be clearly visible on the sunniest of days. The remainder of the pattern performed like most and I discovered the benefit of the small vertical axis in the top half of the FOV, offering an excellent space for observation of targets. I particularly liked the magnification indicator, MTC clicks and the raised tab on the double turn turret, which are all a nod to the military and their requirement to keep eyes on target while adjusting.

The scope itself unsurprisingly performed very well, the turrets tracked precisely, and zeroing proved very easy. Optically, there was some tunnelling at the lowest magnification settings, but boy did it make up for it at the mid to hi magnifications. On a lot of other makes, I have found the top end to become poor in regard to a fussy eyebox, reduced optical clarity and, worst of all, a shift in eye relief, all of which can be really frustrating. The PMII improved with magnification and eye relief stayed constant and I soon found myself at 25x mag to enjoy the view!

When I started this test, I was not expecting to be surprised, the PMII has thoroughly earned its reputation as a go-to premium optic. Having the opportunity to test it over a significant period in various conditions, I am now a believer and have been truly impressed by the build, controls, aesthetics etc and specifically the quality of the great glass. However, with the release of the LRR-Mil reticle, there has been a great deal of demand and as a result this scope will cost around £3300 depending on spec. So, it certainly is not cheap! If considering it with the LRR-Mil reticle, I would highly recommend trying it first, as you must really want it to pay the premium, as there are significant savings is to be had on a PMII with any other reticle. Saying that and having spoken to S&B, it is already evident that the 5-45x Hi- Power, which is even more expensive, is in greater demand, as the increased magnification really makes the most of LRR and that tiny centre dot. At the end of the day they may be expensive, but you can’t go wrong with a S&B!