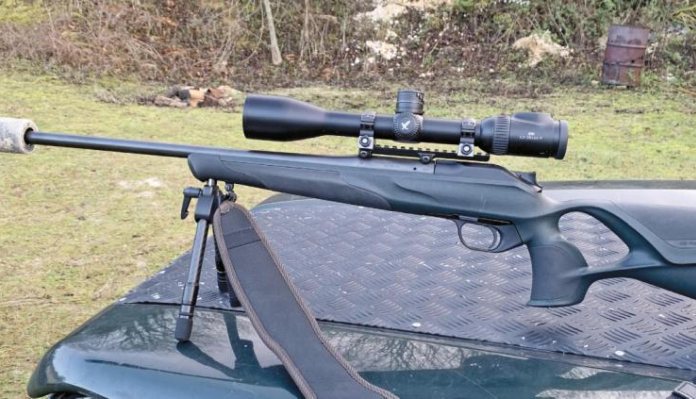 When you say long range scope to the average Brit, their thoughts doubtless turn to big tactical units used on sniper/precision rifles required to push the distance. However, most European shooters have a different view to these sorts of optics, as they tend to build higher magnification and larger objective models purely for hunting.

Here, it’s not about shooting out to distances I and many others would consider unethical, but more about being able to easily see your quarry and identify it, before engaging it or not! A good example might be hunting mountain species like Mouflon or Chamois; I’ve done the latter animal and it’s seriously hard work in very tough terrain. So, the ability to view and asses your potential quarry using just your scope with ease, negates the need to carry a separate spotting glass. Of course, quality optics and build go a long way towards this, as always, so let me introduce you to Swarovski’s Z8i 3.5-28x50 P; if nothing else, we can expect a well-built, high spec unit.

This specification initially screams long range, and it has the legs to do so, but the build is much more hunting than precision. Swarovski, however, have a rather clever trick up their sleeve, in the form of optional, removable, dialling turrets called BTF (Ballistic Turret Flex). Plus, there are three reticle options, two of which offer a useful amount of information, for holdover and windage corrections.

The power of eight

Swarovski was one of the first big optical manufacturers to offer the extended zoom range facility with their Z6 range. Essentially, it has an increased magnification ability that allows you to dial lower and higher than a conventional design. I own a Z6i 2.5-15x56 P (BT) and, as can be seen when compared to a standard spec of 3-15x56, you get a bit more bottom end, which makes it a tad more versatile. The Z8 simply takes that principle and expands upon it. I also have a Z8i 1-7-13.3 x 42 P with BTF and consider that to be the most useful hunting optic I have ever owned, as it’s equally good for close range driven game at 1.7x, as it is for longer range shots at 13.3x.

The spec of the Z8i 3.5-28x50 P speaks for itself, with a surprisingly useful bottom end, aided by a sub-50m low parallax setting for close range work, or as normal right out to ∞ if you want to push the mag and distance to maximum. At first, I thought it a bit over the top compared to my Z6i 2.5-15x56 and doubted I would ever use it at 28x. But it made me re-think my needs a little, as that massive top end does have its uses, even if it’s only improved target ID or precision varminting.

Initially, the 3.5-28x50 P appeared big and I concluded heavy too, however, comparing to my 2.5-15x56 P (BT) shows it not to be over the top. The Z6i weighs 23.1oz and is 14.45” long, the Z8i comes in at 23.5oz and 15”, so easy enough to stalk with. Equally, light transmission is better at 93%, compared to 91% of the Z6, as is twilight factor at 19.9-37.4 and 7.1/29 accordingly. Although these days it’s the ability of lens coatings that has more influence of what you can see in low light with a quality scope. As well as internal light transmission coatings, Swarovski finish the exterior glass surfaces with their SWAROCLEAN water and dirt repellent finish; always useful.

There are no surprises on the build, as the original, 1st generation Z6i set the rheostat style for the 2nd gen Z6, as well as it did the current Z8i series; however, there are some small design changes. The rheostat is integral to the eyepiece bell and was rather tall on the 1st gen model with a centrally mounted, 3-position selector switch at the rear. In the middle it’s OFF, to the right ON with a daylight (sun symbol) and left for ON for night shooting (moon symbol). Actual illumination is controlled by + and – rubber button on top. Gen 2 Z6is moved these to the sides which also reduced the overall height. It also incorporated Swarovski’s SWAROLIGHT system that conserved power by switching off automatically if the scope was raised past a pre-set angle or tilted to the side. The Z8i has this too but has now moved the now longer +/- buttons back to the top but more forward.

The magnification ring is the standard slotted rubber design with raised fin to aid dialling, offering firm but smooth operation. The 30mm body tube is long, so giving a generous mounting length, for its recommended 95mm eye relief. Given the Z8 series is designed to accept the BTF system, the turrets reflect this with a socket in the centre and the usual dialling ring on the circumference, which can be raised to disengage and set zero. Swarovski have configured both windage and elevation to fit BTF; for me, I’d just go with the latter.

The reticle is in the 2nd focal plane (SFP), so will only be true at probably maximum magnification. However, Swarovski has a programme that allows you to see the subtensions at various distances and magnifications; so, if you only use certain settings, you will know your drops. You get three reticle options: most basic is the 4A-1, with a slim full cross with thicker outer arms at 3, 6 and 9 O’clock. The 4W-1 is similar but with a wider cross and shorter outer arms. The inner stadia at 3 to 9 O’clock have lead hash marks, to apply windage. Finally, the BRX-1, this is a ballistic, Christmas tree type with five horizontal stadia below the centre cross that get wider as they go down, with round aiming points in between and lead marks. In all cases, only the centre of the cross is illuminated with a small dot.

If I was using this scope without BTF I’d pick the BRX-1, as it offers a lot of information with fast and easy hold over and windage application. However, with a BTF elevation turret I’d go with the 4W-1, so you could wind in the range then easily compensate for drift by eye once you had worked out the subtensions.

Click values are 1cm @ 100m/.36” @ 100 yards, pretty standard for a Swarovski; however, I thought the actual amount of correction a bit on the low side. In elevation (without BTF fitted) you get 75-clicks per turn and approximately two full rotations = 150 cms/59”. Windage is just one, so 75 cms/25.9”. You also have to consider how much movement after zeroing; certainly, in elevation. Assuming you use 1.25-turns that leaves you with 60-clicks available. Using for example a 100 yard zero and a 308 Winchester, Hornady 178-grain ELD Match load at 2567 fps, this would allow you to get out to 750 yards, which is pretty good and well over the top for hunting.

I put the scope on my Blaser R8 Professional Success with its 243 Win barrel and it did not really add any perceivable weight compared to my Z6i 2.5-15x56.

Zeroing at 100m with my 100-grain Nosler Partition load I had no problem in either windage or elevation getting the bullet 1” high where it needed to go.

A quick word on BTF, as it literally clips on once you’ve removed the turret cap/caps on either elevation or windage, if you buy two. It consists of five (numbered) slip-on range rings, which can be positioned to suit your ballistic drops, not including zero, which is set on the scope. There’s a rotary plate that locks the drum at any setting. A windage ring is included if you decide to use that plane instead or as well. You zero with the BTF off and, once set, there are catches in the turret that allow you to set it back to zero. Once set up, pop the BTF on and to remove press the button in the middle.

So, is that top end mag really worth it? Taking it out on my patch I was able to go from 0 to 1000 yards +. To its credit, no matter what distance, I was getting pin-sharp and well rendered images. At 1000, I would have had no problem spotting a deer and judging its sex. Lesser makes would doubtless get out that far or near it, but their ability would be less obvious. Even when mounted on my R8, which is more of a sporter than a target gun, I had no problem with head/stock position and eye relief. At shorter ranges, the top end is equally useful for target ID and smaller targets too.

Let’s not kid ourselves, this is not a cheap scope and the magnification range, certainly nearer the top end will not be for everybody. Also, and depending on your rifle and mounts. windage correction is not that generous, so you might have issue with running out of movement. However, it’s a piece of quality throughout, if you have the need.