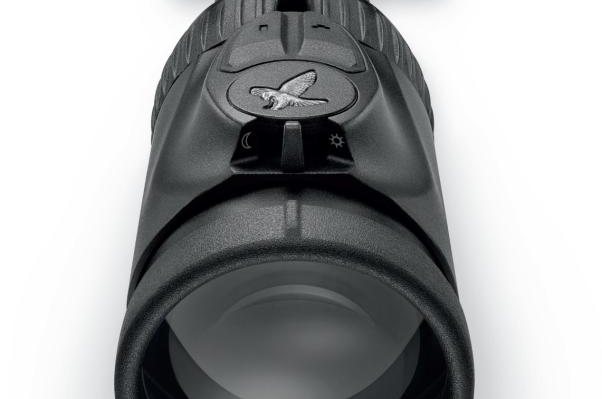 When it comes to shooting driven boar, the action is close and quick. I can categorically state that I have only shot one pig at 100m, he came out and stood by a bush and I rested the rifle on a tree and took him like a deer, I did not even bother to wind my scope off its lowest setting either. Everything else has been shot at 50m, normally less. With this in mind, it’s easy to see that a lower power and compact optic that offers a good field of view (FOV) is by far the best choice!

Traditionally, this slot was filled primarily by two scope specifications; 1-4x24 or 1.5-6x24, with the lowest settings giving near no magnification, so the desired wider FOV allows both eyes open. Then, Swarovski started the new wave with its Z6i, which offered a six times zoom range, which allowed you to increase the top end mag while decreasing the lowest. For example, their Z6i 1.7-10x42, as can be seen, offers a versatile range, with the bottom end low enough for the fast and furious work, but 10x allowing longer shots too. Later, Swarovski went on to launch their Z8 range (eight times zoom), and if the Z6i 1.7-10 x42 was clever, their Z8i 1.7-13.4x42 was even better! Or, for us driven hunters, how about a true 1-8x24, which ups the humble driven scope to a whole new level.

Or, how about something completely different? Which is what Swarovski have done with their new 0.75-6x20 Z8i. They have taken the eight times zoom range and turned it on its head. The lower top end of x6 now allows them to go below what was generally assumed as the lowest possible magnification of 1x to get down to 0.75x. So, what does this actually offer?

Going below x1 means a smaller image, but a surprising 30% increased FOV; @100m 56-7m, which up close will give you more spatial awareness, which for fast moving pigs might be no bad thing! Light transmission is good, at an impressive 93%, given its going through a 20mm objective lens as opposed to the normal 24mm. A comparable Z8i 1-8x24 is the same at 93%, though its FOV is 42.5-5.3m

The evolution of the Z-series has gone through a few improvements apart from the obvious 6 and 8x zoom ranges. The integral, eyepiece-mounted rheostat has been lowered and streamlined, making accidental operation of the selector switch less likely. The 30mm body tube remains, the turrets on the Z8s, can be retro-fitted with their BTF (Ballistic Turret Flex) system, which is a clip-ON/OFF ballistic drum that gives either elevation or windage, or both a BDC facility. Though perhaps not necessary on a scope like this, Swarovski included a set along with their new, flip-up lens covers and what I found useful; a throw lever for the magnification, perhaps more so on a compact like this. If you want to know more about BTF read April 2018 Shooting Sports (SCOPE TEST Swarovski Z8i Ballistic Turret Flex Part II) page 66.

There are two reticle options (both illuminated); the D-I, is just a small centre dot and nothing else that gives a truly uncluttered view. The 4A-IF (Zoom and Flex Zoom) is a 4A-type cross with a central red dot that can be augmented with a red ring around it, which offers a useful lead facility.

Click values are 1cm @ 100m/.36” @ 100 yards. With 76-clicks per turn and three full rotations in both windage and elevation you get a full movement top to bottom/side to side of 89”, not bad for a driven scope! The throw lever clamps around the magnification ring and offers fast operation, the windage turret cap is extra deep and carries a spare battery for illumination, which fits on the left of the saddle, as this model does not offer parallax adjustment. The rheostat has a 3-position switch; middle OFF, Right daylight (sun symbol) and LEFT night/low light (moon symbol). Brightness is adjusted by rubber-covered switch pads on top, + (right) and – (left), with the last setting being remembered.

The magnification ring has a built-in stop position at 1x and as you get to it you feel a positive click, which indicates you are about to go sub-1x. Swarovski call this ‘VIEWPLUS’ and you are immediately aware of the smaller image and the significant increase in FOV.

In use, build quality and ability were as ever 100%, with the top end image belying it was a 6x mag system, which I have come to expect from Swarovski. I did not much care for the simple D-I reticle, as it can be a bit too hard to pick up on some backgrounds unless illuminated. However, the uncluttered view is appreciated. I’d go with the 4A-IF Flex Zoom, as the cross hair gives me a register and the ability to have a dot or circle & dot quickly is most practical for the main job.

I fitted the 0.75-6x20 my Blaser R8 and found that if the rear flip cap was centred as most of us would, when cocked, the de-cocker hits the lug at 6 o’clock on the eyepiece rim. It’s a simple matter to offset it a tad, as if unnoticed you might think your R8 has jammed. This was not an issue on turn-bolt rifles! Playing devil’s advocate, as is my job, I see the logic behind the 0.75x ‘VIEWPLUS’ facility but ask this question; would you sooner have this model or go for the Z8i 1-8x24? Of the two, its better top end 8x mag appeals more to me!