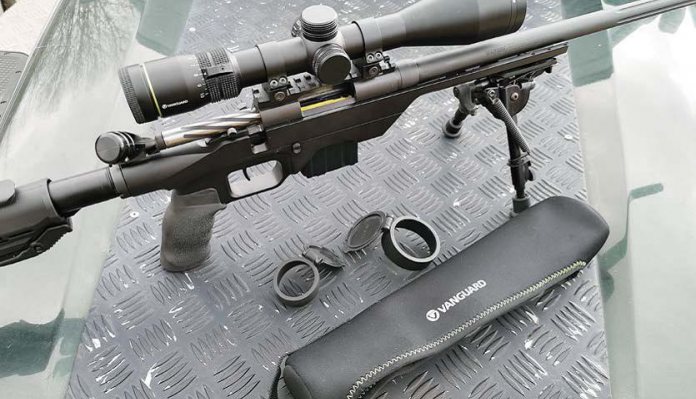 Vanguard are a global brand that design and manufacture a large range of products for the photography industry as well as bird watchers and nature lovers. These include tripods, monopods, binoculars, spotting scopes and all the accessories and luggage that goes with them. They have now made the transition into shooting, bringing a new range of rifle scopes with them. The Endeavor RS IV series is now available in the UK and includes the 1-4x24, 1.5-6x42, 4-16x44, 4-16x50, 5-20x50, 3-12x56 and the 2.5-10x50 (featured).

The scope is manufactured in China and includes a standard matt black finish. It is built around a 30mm aluminium main body tube and has a magnification range of 2.5-10x, making it ideal for hunting. The eyepiece includes a rubberised fast-focus and a knurled magnification ring. Both operated smoothly, providing consistent resistance throughout their adjustment range. The mag ring shows full and half value markings and includes a raised fin at the 6 o’clock position.

As well as a sunshade, Vanguard also manufacture their own anodised aluminium retro-fit zoom-lever, which can be purchased separately. The scope features a 50mm objective and uses Hoya Extra Low Dispersion (ED) Glass to achieve 80% light transmission. They have also used Advanced MultiGuard Coatings and, when compared to other scopes in a similar price range, the optical quality is on par. There is no parallax adjustment; instead, it has been fixed at 300-yards - ∞. They have fitted a sidemounted rheostat to control the illumination and it uses a single CR2032 battery protected by a screw on lid. It has 11 brightness settings with an OFF position in between each one, which is a nice touch.

The 2.5-10x50 is available with the German No 4 reticle, a popular design with deer stalkers, which has standard crosshairs with a floating illuminated dot at the centre for a fuss-free sight picture. Alternatively, there is also the Dispatch 600 (DS 6) reticle (featured), which has been designed for standard calibres like .243, .270 and .308 Win, with the aim of taking the guesswork and complication out of long-range shooting. It incorporates some rangefinder stadia, bottom right of the image and subtensions on the lower half of the vertical axis. They include numbered hashes at 3, 4, 5 and 600-yards with ½ marks between 3, 4 and 5 with the addition of ¼ lines between 5 and 6.

They have also put windage references on 5 and 6 but nowhere else, which I found strange as even at 300-yards wind drift can be significant! The central crosshair and subtensions can all be illuminated, except for the numerical digits, quality was good, with only some slight fading at the extreme edges. It was powerful and daylight visible when on the highest setting, which can be useful when aiming at dark targets.

The reticle is in the second focal plane (SFP) which means that the subtensions are only valid at a specific magnification. Using a 200-yard zero, it is designed to work at any power out to 275-yards. Beyond that, Vanguard has worked hard to provide an online ballistics program to help users make the most of their scope. This offers data on factory ammunition or alternatively if the user reloads, then it just needs the velocity and the ballistic coefficient of the bullet (which it can help to calculate if needed).

Users can also input environmental factors like altitude, air pressure and temperature in line with their location. Using this data, the software then provides an optimum magnification that marries the drops up with the scope subtensions at 300/400/500/600-yards. I used data from my .223 and the software got close, aligning at 302-yards (7-inch drop), 397 (22-inches), 496 (46-inches), 589 (81-inches) using 8x magnification. I compared this to proven data from Strelok, which showed this at the same distances: 8-, 22-, 46- and 78-inches. Not far off, and some tinkering of the data imputed could close those gaps up. Obviously, none of this helps you with windage at those distances but every little helps!

The low-profile, capped elevation turret is a simple design, making it easy to use. It shows ¼-MOA click values, providing 48 per turn and 12-MOA per rotation. This gives the optic an internal adjustment range of 60-MOA, which is plenty to zero with, as most users will not be dialling for long range shots, opting to use the reticle instead. The windage is no different, except it shows 6-MOA in each direction. Unfortunately, there are no left/right markings visible from behind the scope, which are useful when dialling in the wind from a shooting position. Both turrets can be zeroed easily by lifting the drum against spring tension and repositioning it at zero, a system that I really like.

Out of the box, the Endeavor RS IV 2.5-10x50 comes with some basic flip-up lens caps, a neoprene scope coat and a large soft cloth as standard. However, it is priced at £499.99, which means that it is up against some serious competition. Once setup, the ballistic reticle is easy to use, as is the online software, and it goes some way to making long range shooting easier. However, wind drift is the greater challenge, and time, consideration and calculations still need to be made, especially at longer ranges.

The fixed 300-yard parallax is functional but meant that at 110-yards the reticle was not in focus, making precise zeroing harder. Side-mounted parallax adjustment will always be my preference. The turrets provided distinctive clicks and were easy to zero as no tools are required, and I really like the brightness levels of the illumination. Overall, a scope with a clever reticle teamed with some great software that is worth a look.