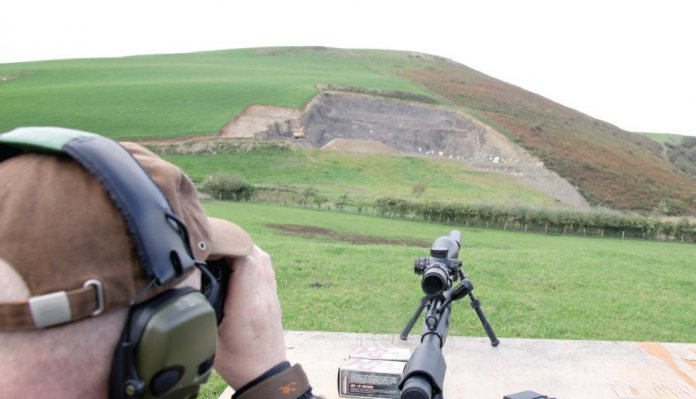 In the December 2018 issue, you may recall a small, one page introductory story I did on the new SIG SAUER Electro Optics BDX (ballistic data Xchange) system. We were invited by importers Highland Outdoors to Andrew and Helena Venable’s WMS Firearms Training in darkest Wales for a demo. And, I have to say, we had an interesting and enlightening time.

For many years, manufacturers have been trying to combine a laser rangefinder into a practical-sized rifle scope. Swarovski offered their LRS (laser rangefinder scope) way back, big and blocky, but it worked and paved the way for their current ds model. Zeiss, Bushnell and Burris, were there too, with the latter evolving into the Eliminator with a self-adjusting reticle, so combining the elements of estimating range and compensating for it on the reticle display automatically; very much a future sight. In all cases, optics were on the large and heavy side.

However, I have my views on scopes and reticles that proport to do it all for you. Yes, when fully understood and used correctly, they work, and we have seen many bullet drop-type compensation (BDC) systems over the years. SIG’s BDX is the latest but does not go down the all-in-one route, and my current findings shows a practical and accurate solution for longer range shooting needs.

BDX takes an alternative route that offers a series of SIG’s Kilo separate laser rangefinders (LRFs) and a far more conventionally proportioned scope, the Sierra3BDX. Both items are available in a range of specifications: Kilo - 1400BDX, 1800BDX, 2200BDX, 2400BDX and 3000BDX rangefinder binocular, numbers indicate effective range. The Sierras offer specifications of 3.5-10x42mm, 4.5-14x44mm, 4.5-14x50mm, and 6.5-20x52mm. An entry level package – a Kilo 1400BDX and Sierra 3.5-10x42mm come in at a pleasing £991.95. Plus, you get an LRF to use as you wish, so you could buy that first then add the scope. The BDX-R1 Digital Ballistic Reticle provides a ballistic solution out to 800 yards with 1MOA of accuracy; not too shabby. However, all this must be balanced against the rifle’s accuracy potential and the shooter’s ability, for, as I’m far too fond of saying; there’s no such thing as a free lunch. But, in some areas, the BDX comes surprisingly close!

Here’s what SIG says about their baby: “The BDX rangefinder and rifle scope system is simple, fast, and intuitive. Simply download the SIG BDX app available for Android or iOS smartphones, pair the KILO BDX rangefinder and SIERRA3 BDX riflescope, set up a basic ballistic profile, and then you’re ready to shoot or hunt. Once you are in the field, range your target as you normally would, and the KILO BDX rangefinder will utilise on-board Applied Ballistics Ultralight™ (ABU) to instantly send your dope to the scope via Bluetooth. Using your basic ballistic profile, the solution is calculated for your target and will instantly illuminate on the BDX-R1 Digital Ballistic Reticle with windage and elevation holds in the SIERRA3BDX riflescope.”

But there’s a lot more, as we shall see, as you can also factor in windage, though and unlike elevation it doesn’t automatically adjust, you pick a default like the near universal, 10mph @ 3 o’clock and work from there. However, direction is on a clock gauge on the touch screen of your phone, so it’s a simple matter to go into RANGEFINDERS and re-set wind speed and angle as required from there. There’s also an adjustable angle cant indictor, which is a boon, as the range steps out. When connected, it displays both altitude and temperature automatically.

You can set up and store 25 ballistic profiles for different cartridges, calibres and even rifles with the usual features; calibre, ballistic coefficient (BC) in G1 or G7 profiles, velocity and bullet weight. There’s a database for bullets by calibre, but in my case, I had Norma’s new 243 Win, TipStrike 76-grain, which were not on there, not a problem, as it can calculate the BC too. Like any modern system updates come through automatically as and when they are sent. There’s the option of linking the system with a Kestrel weather meter too. Plus, set an energy limit indicator (Kinethics), here you determine the minimum terminal energy you feel is right for your quarry and if it drops below it at a set range it will let you know. But first, the nuts and bolts

The Kilo LRFs have been around for a bit now, I’ve been using their 2000 model for a couple of years and found it small, easy to use and accurate. I had the entry-level standard 1400BDX and it offers a compact and feature-packed design; Lightwave DSP™ digital rangefinder engine, Hyperscan™ with 4xs per second scan rate, RangeLock™, and the Lumatic™ auto-adjusting display. It also offers LOS (line of sight) and AMR (angled modified range) that’s up/down shots to you and me. Power comes from 1 x CR2 Lithium cell. The Sierra scopes feature HD glass for superior resolution and optical clarity, 30mm main tubes, side-focus parallax adjustments, and the LevelPlex™ digital anti-cant system. However, outside of its primary function of displaying and setting the range ‘pinged’ and outputted from the Kilo it’s a conventional optic and can be used as such.

The BDX-R1 Digital Ballistic Reticle offers a medium, Dual-X pattern. A number of very fine wires run from right and left to the 6 O’clock stadia that illuminate the correct aim point from the range reading sent to the scope by the Kilo. Also lit will be the wind leads (as required) and the left and right cant indicators, which take the form of triangles, all this is controlled/lit by the rheostat drum on the left of the saddle. It’s also possible to pre-programme it with your own calibres and ballistic data, which appears as a ladder reticle with your pre-set ranges/aim points already input (ballistic reticle). Meaning you can use the scopes BDC function without the Kilo BDX if you wish. This takes a bit more setting up and I manged to select it without realising and could not get the scope to connect, but it was simple enough to find the right button and get it sorted. The scope runs on 2 x CR2032, 3V coin-type batteries.

I’m a bit of a technophobe when it comes to electrickery, but I found the BDX system easy enough to set up, apart from my aforementioned mistake. It’s all in the pull down instructions on the app/phone plus there are video tutorials, I’d urge you to familiarise yourself first. I’d say keep it in automatic ranging mode, as that’s what BDX is all about; however, it’s good to know that you can pre-set known drops etc. if you want or need to.

Open the app on your phone and tap the first screen, the second appears with four options; PAIRING (connecting scopes and LRF to each other and the app/phone) or as SIG call it bonding. Here you get prompts for various actions with a blue light appearing on the magnification ring fi n when data is received, PROFILES (ballistic data), RANGEFINDERS shows your selected ballistic profi le plus wind speed/direction etc, and a heads up (HUD) display. SIGHTS allows the selection of the BDX and the alternative ballistic reticle functions, along with the choice of MOA or Mils notation. Finally, SUPPORT with videos, manuals and FAQs. There’s also a setting screen where you can change notations like yards to meters, temperature F or Cº, grains/grams etc. If the scope times out, you just rotate the rheostat drum or magnification ring and it turns on again, the Kilo just needs the power button pressing.

The scope is quoted at an 80% light transmission figure, which seems low but there’s a lot going on inside; chances are, it’s more of a daylight option and gives a bright enough view. My example was the 4.5-14x50, turrets are capped as they only require zeroing, with 20MOA per turn (80-clicks) in elevation and 2.25 full turns. Windage gives just under two full turns and is split 10-0-10 with R and L prefixes accordingly, which cuts the confusion on winding in a quick wind adjustment on the fly. A central screw allows the turrets to be disengaged to be set to 0 once zeroed. The parallax drum is on the left of the saddle and is marked 50, 75, 100, 150, 200, 300, 400, 500 yards and ∞. The magnification ring is slotted for grip with a dialling fi n and firm in operation, at the rear is a fast-focus system. The Kilo 1400BDX has a spec of 6x20 and comes with a lanyard and nylon pouch.

Highland also supplied a Howa 1500 heavy/24” barrel in 243 Winchester in a GRS Berserk synthetic stock and an aimSport Triton 42 reflex moddy. I added a Harris BRS bipod and RUAG Ammotec UK Ltd. donated 200-rounds of Norma 76-grain TipStrike ammo. You zero in the conventional, mechanical manner, not forgetting to input your zero range into the profile. I set up for 100m; after all, there’s no need to go further out as you have the ultimate BDC reticle! The TipStrike was averaging 3463 fps with an ES of just 11 fps with an energy of 2032 ft/lbs; nice!

I did find the reticle a little on the wide side, as bullets were striking parallel to the aim point but an inch apart, with a slimmer pattern, I’m sure it would have been grouping around the 0.5” mark. I set up some fired shotgun shells and was easily picking them off with the cross centred; this is worth bearing in mind on longer shots, so you can place your aim point as required, to reduce lateral spread.

I’d already shot the BDX system in Wales on steels at WMS out to 400 and 450 yards and it worked well. On the larger plates, you could see the point of impact that very much corresponded to the aim point, proving that A – it ranges precisely enough and B – you can put the bullet on the money, given your skill. With windage, it’s easy enough to aim in/out more or less as required as you have a visual marker.

Once set up, paired and bonded BDX near runs itself. Range the target and you will see the blue light on the scope flicker as it picks up the information, then go solid as the reticle adjusts. All you do is place the aim point and hold for wind as required and shoot. I initially used it out to 350 yards on my land on 4 and 8” steel gongs with good success. I plan to take it out to 800, or as near as I can get and also do some live quarry shooting, that will include rabbits, corvids, foxes and maybe even deer, and that’s where I’m at the moment. I will get back to you over the next few months, with my further fi ndings and progress.

SIG doubtless worked long and hard on the BDX system and have come up with a clever and practical product that near does what it says on the box, plus won’t break the bank. I was honestly impressed a lot more than I thought I would be. One of their staff was there and intimated that they are working constantly to improve the product. I suppose the next step forward might be to incorporate a wind meter into the Kilo and BDX that dope as well, now that would be excellent.

But I will leave you with this final comment; regardless of the ability of the rifle, calibre or optics, there is no such thing as a free lunch when it comes to hunting live quarry, as you must know how to shoot and aim correctly and understand your equipment!