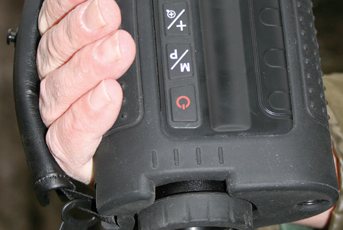 Thermal imaging uses the heat signature of the target to show you a picture and these days it’s ‘almost’ affordable compared to what is used to cost. It also gives distinct advantages over a normal night vision device which allows you to observe at night by boosting available light or enhanced images using an Infra red beam.
No such problems with thermal, no light is given off, just heat recognition from any warm body it views. Once you have used one you will be amazed that everything has its unique thermal signature! Instead of just seeing blocks of light or cold, you get a ‘black hot’ or ‘white hot’ image of the landscape and what’s in it in front of you, it’s surreal.

It works day and night with no problems, unlike most NV units. Nothing is safe, any heat source however small pops out at you on the screen compared to the much colder backgrounds - fields, trees or farm buildings. The only thing it will not cope with is glass windows or doors as it cannot detect behind this media but can see the heat bleed at its edges.

Called the Guide IR518B it’s not an NV scope or traditional optic, but purely as an observation device to locate a heat source and in many ways so much better, as it sees things the aforementioned cannot! I have used it and its big brother the 518C all year and you can see the sap rising in trees and plants, it’s that sensitive! Mice sitting in bushes, rabbits at the mouths of warrens, heat from rat colonies among straw bales, foxes in corn crops, deer moving through woods or poachers lurking in the under growth.

Thermal Imaging equipment has always been expensive so has never really been viable, other than to large estates who may have a big poaching problem. Thomas Jacks now supply the Guide 518B, which is available in three models, differing only in image size and detection range. The 518B offers 30% more viewing than the A and could detect a human at 600 metres. It’s a compact and simple unit to use which is important at night.

It weighs about 1lb and runs on 4 x AA and measures 182x97x68mm so is easily hand-held aided by the strap. The lens is 25mm F 1.0 and offers a wide field of view, 21.74 x 16.39° with image quality or sensor resolution of 384x288 pixels. Focussing is manual, fast and precise, although a gloved hand might struggle. There’s a x2 magnification button to increase the image size if desired.

Controls consist of four buttons just right of the centreline of the body and are easily accessed by the hand. Number 1 is depressed and held to switch the unit on and 18 seconds elapses as the Guide runs through its calibration stage before an image is visible with an audible click, click. A single operation on this at any time whilst viewing will recalibrate to changing temperature variations to maintain a clear image.
The second button accesses the menu to select internal settings and play back modes. It is also used to switch between black or white heat signature or ‘Polarity’ which is how the hot spots are shown on screen, very useful! The third operates the 2X digital feature and the fourth when pushed once takes a JPEG image or if held down then released video MPEG4 footage. The battery compartment is on the top of the body and also houses the 4GB SD card, supplied, to store images. There is an external socket for RS232 connection and a standard tripod adaptor.

The 518B runs on a 50 Hz detector system so images are real time and there is no lag as you use it. It is power-hungry so recommend 2500 mAh power rechargeables and have another set of AAs as backup. The re-chargeables lasted around 2 to 3-hours depending on how much image capture, and the Lithium’s longer but the recalibration and coldest of the day or night will also make a difference. Not turning it off and on also helps. The x2 digital magnification just magnifies the image and only makes a good image fuzzy and blocky, so I would not bother!

The Polarity button is useful. In white hot mode a vivid signature shines out like switching on a torch and is instantly visible. However, black hot gives better definition like a B&W photograph and now anything hot shows up black not white, so in reverse polarity. In this way you can scan any anomalies that shine back at you indicating a heat source, therefore something alive or warm.

Absolutely gob smacking is the only way to describe the Guide 518B. I used it day and night and actually the night time images were better because the colder the background and the warm bodied animals stand out better. Because the viewer is close to your eye the images are sharp and you can easily see a stag at 1000 yards, a human at 600, foxes 400 and rabbits up to 300.

In white hot mode the image is like a negative but sharp. You would think a tree would not show up as it is cold, not so, in fact everything gives off some form of heat however low. Any source instantly pops out at you, and you can move closer. Soon that little pin prick of light turns into a rabbit, rat, fox or poacher! Nothing is safe, what is invisible even with a lamp or NV kit; thermal sees it!

Mice running about in the hedgerows, heat from a mole hill, pheasants in trees, hot squirrels drays, hares at bay, sheep and there ablutions left small dots of light all over the field! You could see deer walking about in the woods as they passed between branches, equally those bedded down, so precise was the heat source detected by the Guide 518B. Foxes hiding under a hedge line shone back at you without even knowing they were being observed. Light rain or smoke will not upset the imager y either.

The real bonus is you can capture what you see as an image or video, which is incredibly useful in a poaching situation as evidence or locating illegally parked cars, warm guns discarded or quarry tucked under a bush.

Switching from black to white heat focuses in to determine precise location and identification, and I had some really close encounters deer! Caution though, one evening a large heat signature clearly viewed through the branches of a wood, indicated fallow deer. On stalking closer we got to 60 yards and then realised we had just stalked a freshly placed dung heap! But through the trees its intermittent heat source looked like moving deer, heigh-ho.

The Guide IR 518B is little short of amazing and an effective tool for many uses both day and night. Counting and locating deer, fox control, anti-poacher patrol and a lot more besides. It’s easy to use, portable and image quality was superb! However, from a moral point of view, you need to use it wisely!