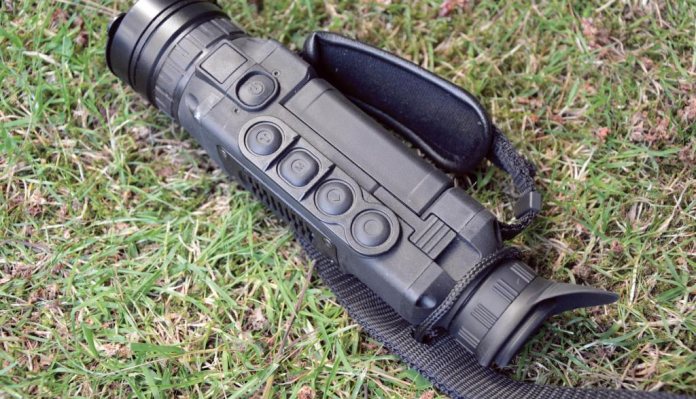 The Pulsar Helion Thermal monocular range arrived to great fanfare a few months ago and after spending two months unlearning the older Quantum model to familiarise myself with the new unit and its latest, greatest features, I’m left slightly divided.

The addition of Wi- Fi connectivity to Pulsar’s Smart Vision smartphone or tablet app allows video to be streamed live to the internet, if you so require. It enables more than one viewer to use the thermal detection facility, which can be very beneficial from a vehicle mounting with display on several screens to each passenger scanning the terrain being hunted. On-board video and photo recording into an 8GB memory will store 150-hours of video or 10,000 photos, which is agreeably helpful when suggesting to a landowner that they need to look “deeper into the darkness”, and accept vermin control problems or deer populations running amok. The other main new feature, which leads us to the visible ergonomic changes, is an integrated lithium ion 5000mAh battery that promises up to eight-hours run time; I found it to be very accurate. It is supplied with a 240-volt adaptor but USB lead connectivity means you can charge it from your PC if required; the same lead can be plugged into the Helion to offload your captured footage too.

The shape of things to come

The older, flattened cuboid shape, which could be hung around your neck like any binocular, has been replaced by a longer rectangular form, with a side-mounted strap for your palm/hand and all the buttons on top. Menu systems and structures remain similar, other than the additional Wi-Fi controls with multiple colour palettes at your disposal. The main ON/OFF button sits towards the frontal 50mm objective lens, just behind the image focus collar and a flip-up lens cap rotates through 360-degrees for optimised comfort. These top buttons are designed to fall to your fingertips, and although a good idea in principle, it’s a bit like holding a clarinet in one hand. The feel of pressing the rubberised controls is a little vague, especially with gloves, and even when you learn which button you need, you might have to put a fingertip to one end and ‘count’ your way along to the correct button’s location; otherwise you will get some functional change you don’t want. Short, medium and long presses on each button alter their functionality and you learn the basics in the end but the dial controller on the previous version was faster in my opinion, also less likely to cause confusion. Its delicacy also aided a steady hold of the Quantum, whereas the Helion really does need two hands when pressing buttons, as they do require some force.

Another collar at the rear focuses the internal screen. At the back, you have a rubber eyecup with a wing collar sealing to your eye socket and blocking out external light. As always, if you stay glued to it for too long you lose your natural night vision in one eye, as your pupil will close and you also get some condensation forming on the external glass from your body heat. The collar rotates with detents in-built, so when it’s set, it stays set for either your left or right eye and won’t get nudged. Your eye will stay mesmerised by a 640x480 pixel resolution internal screen, to display the image conveyed from the 384x288 un-cooled Microbolometer sensor. It is equally useful in both daylight and darkness, as naturally camouflaged animals do pop out at you in daylight through obscuring foliage and in darkness, rabbits are visible beyond 500-metres in short grass, with unobscured foxes and large deer almost double. Identification of possible quarry and location is obvious but identification needs cautious attention to detail. Topography and foliage is visible in bulk but remember, single blades, or small twigs and plant stems, still need to be avoided and that is where thermal still leaves night vision at a slight advantage.

What’s on the menu?

The display structure is relatively clear and intuitive, with menu ‘trees’ to navigate but I found the exact point of focus within the exit pupil was more critical than I was used to, if you didn’t know better, you would start altering eyepiece focus, rather than trying to position the eyepiece repetitively in position within your eye’s bony orbital socket, so just watch out for that one. Increasing digital capability on many products has seen a slight lack of optical integrity to my mind and this behaviour from a ground glass lens is typical of a little bit of corner cutting to keep a lid on price in my opinion. Pulsar are not the only manufacturer to do this, so be aware.

All instructions are very comprehensive to cover the extensive options integrated into the Helion and when you get to know how all the functions work, with combinations of fast, slow and long button presses, it does become easier mentally, if not always physically on your fingertips. Although buttons have slight shape variations and the centre main menu button has physical partitions to segregate from up/down controls, these are too subtle for cold or gloved hands. Holding the Helion one-handed, as intended, tended to angle my four fingers onto the rear three buttons with one finger ‘spare’ at the back. It’s all very well when you are looking at it but this all gets done in the dark remember! I always found myself operating it with both hands anyway, pressing the firm rubbersied buttons with a firm grip wrapped around the unit is an ergonomic compromise that disturbs your ‘aim’ and once set up, I left everything well alone, except for occasional changes in brightness and contrast or colour palette. Even then, mistakes occurred and wasted valuable seconds fiddling in the dark. The rearmost button controls video/photo on and off with a single press, which I did like and in front, a long press of the down button gives you a magnified screen in screen, which I found helpful when counting individual (four) fox cubs huddled together 200 metres away from me at dusk.

Ghost in the machine

Ghosting of the image requires screen refresh to be set up manually, semi or fully automatic and I still find you get a cleaner image by closing the lens cap to do it every now and again. There is an internal shutter to do this and get rid of all the persistent residual thermal ‘stains’ on the image but belt and braces with both is noticeably better every 10/15-minutes or so, especially if observing large sources of heat. You can point it at the sky, or floor, to do similar but the lens cap is always handy but after two-months, the detent that locks it shut seems a bit weak now and it regularly falls open when stored in my rucksack while travelling.

A lanyard is supplied and day to day, the main thing I dislike about the Helion is the location of the anchor bolt for this. Its ahead of centre on the underside, so leaves whatever lanyard on it unbalanced. Although I have customised a 25mm nylon strap to hang it around my neck, it still falls to the side and rolls around on my chest, rather than the Quantum that would sit so flat and discreet. Its longer, slimmer shape will drop into a pocket more easily but something this size at £2.5k is getting tied to me somehow, especially considering its likely use in the darkness.

Close focus is improved because I had 4-metre capability on the XQ50F, a significant benefit over the 5-8-metres of previous Quantum days that I found quite debilitating around farmyard buildings or unusable for ratting inside barns. The image quality is a little better but to be honest, it’s hard to see a great benefit over the Quantum XQ50 of old. 4.1x magnification bassline optical magnification can be wound up digitally to 16.4x but picture quality suffers and personally, I always preferred the lower magnification of the XQ38 and would trade having that as a positive, for the 50’s longer 1800-metres detection range and questionably useful extra magnification. I remained mostly in the black/white colour palettes, as they seem to offer the most relaxed detail, contrast and resolution, with occasional switches to red=hot to differentiate between rocks and rabbits, I have got quite used to the image style Pulsar thermals give you and I would not be without one at night now.

The 50hz refresh rate is smooth and the movement patterns of animals are easy to pick up for the greatest aid to differentiating species. It’s gradiametric rangefinder did seem a little harder to use with buttons rather than a roller, as it’s also difficult to hold the Helion really still one handed but it’s always going to be an approximation of range, not a precise value. The three-animal choice listed on the internal menu are a little larger than we will likely encounter here, so just beware a standing jack Rabbit versus our own humble bunny is quite a size difference, so indicates the range significantly further than is real. It’s most helpful set at an arbitrary value for the quarry you are mainly intending to hunt and allowing it to aid your mental ability to range in the dark and stalk in on quarry, that other than smell and noise, has no idea it has been spotted.

The IPX 7 waterproof rating for submersion to one-metre is possible, but I wouldn’t take this to heart and treat it as showerproof. The heatsink on the left side does create a significant output, so make sure that you leave it clear to fresh air for cooling, this is pretty much a right-handed unit. I wouldn’t be without a thermal monocular now, it has opened up the darkness in a way night vision and lamping never could and although I don’t think the XQ Hellion has particularly improved image quality, value for money has significantly improved over the Quantum’s (Quanta?) from just 12-months ago, with lower price and more functionality in the digital era, if that is what you want. I do feel ergonomics have been compromised though and although it looks sleeker, it’s less intuitive in the hands and fingers.

Between this and the previous Quantum, I basically see advances in the electronic connectivity but no serious improvement in capability for actual use detecting quarry species. I still prefer the ergonomics of the Quantum but have to admit the new battery is excellent.