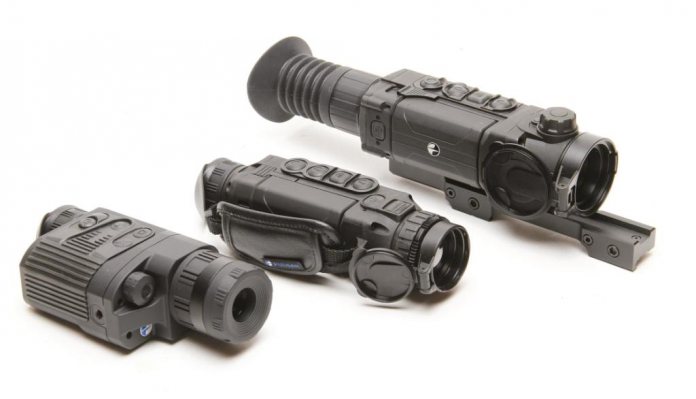 These days, new NV kit seems to be obsolete not long after it’s launched; this fast pace however, keeps us at the cutting edge. On test are three Pulsar thermals: Quantum Lite XQ30W, Helion XP38 and XP38 weapons sight.

This is entry level with 18 or 23 mm germanium lenses, the 23mm on this model delivers very good performance and detection range for a realistic price for those wanting thermal detection at sensible hunting ranges. This Lite version has a reinforced fibreglass body with rubber armoured contours for an IPX4 degree of weather protection.

You have a simple control layout - a focus ring behind the lens that also has an iris rotating cover for protection! There is the front-mounted control wheel that when pushed operates the brightness, contrast and rangefinder mode. Rotating it increases or decreases levels accordingly. On top, is the RF rangefinder button marked with a cross, that when pushed, allows stadiametric measuring.

Next to this is the Mode button that activates the digital zoom (2x or 4x power) and colour palette (seven colours); white hot, black hot, red monochrome, rainbow, ultramarine, violet and sepia. Along with three modes – CITY; enhanced contrast - FOREST; low contrast and IDENTIFICATION; improved details. Behind this is the calibration button that allows manual, semi manual or automatic calibration to optimise detection as the surroundings change temp. Rearmost is the ON/OFF button and this new model has a super fast 2-second start and shut down mode, which is really handy.

There’s a Weaver rail to the left and tripod thread and below is the video out and DC power in docking covered by rubber plug. The eye piece has a rubber eye shield and focuses for diopter correction and to the right is the removable battery pack. Remove this and fit 4 AA batteries, a Li-ion pack or secure a power pack to the Weaver rail. There’s also ‘video out’, time, date, pixel repair etc.

This is the next generation thermal observation device, available in XQ OR XP variants where the XQ have 384x288 res sensors and XP the higher 640x480 option. It’s slimmer but heavier with the same build and now has a menu-only led operating system and easily removed battery pack. The Helion has an increased un-cooled micro-bolometric matrix of 640x480 pixels with a 17 nanometer pixel size with 50Hx refresh rate for a superbly detailed image.

There’s a heat sink to the left of the body to prevent heat build up and thus maintain performance. Lenses are interchangeable and have a quick release feature to update; the new smooth continuous digital zoom allows differing fields of view to suit your needs.

The battery pack is a Li-ion unit that slips in on the right-side hand grip. It maximises comfort and significantly increases viewing times. An external pack can be fitted. It is so much better than previous systems! The ON/ OFF button is up front, which needs to be held down to switch off completely, otherwise a short push switches the screen off mode to eliminate illuminating the face in the field. Also, you calibrate with this button for optimum performance in changing heat environments.

You then have three buttons in series, the middle of which is the mode, with toggles either side to navigate the menu. In this menu you can activate Wi-Fi mode to stream videos to an external unit for You Tube aficionados. You can set calibration and detection mode such as rocks, forest or identification, so enhanced contrast, low contrast or universal mode.

Colour palette, as the Pulsar Quantum Lite XQ30W, to set as you prefer or need to alter detection and lens selection, remote control use and defective pixel repair. You can also set the rangefinder for hare, wild boar or deer sized game, as well as Picturein- Picture (PIP) function that allows you to see a zoomed in image inset into the main view. There’s a USB port for dumping pics/ videos and the IPX7 rating ensures the Helion is waterproof in rain, snow and submersion in 3ft of water for 30 minutes.

This is the top dog of thermal weapon sights at present, along with its bigger brother XP50 Trail. Both have basically the same form as the Helion, but with adaptations for mounting as a weapon system and some button change configurations. The XP38 has the higher 640x480 sensors and high-res Amoled display to match and so gives a superbly detailed image. Lens size is 38mm with 1.2x mag on this model with a good field of view, wider than the XP50, so good for all-round use. The focus is now a turret above the front lens for fine detail control and the ON/OFF on the right side and back of the body, which operates easier on the Trail than the Helion!

You have an extended Weaver mounting system and quick detachable features, so in affect, you can use the Trial as a hand held as well. Also, all the same features from the menu led system as the Helion, but the additional features for sighting as a weapon sight.

There are three buttons for ‘driving’ the menu and you can choose between 13 reticule options and also brightness and colour. Plus, one shot or freeze zero. One shot mode is choosing a zero range; anything from 0 to 955 yards and a choice of three zero ranges, so the sight can be used on differing devices as the saved settings can be accessed when mounted to differing rifles.

Take a shot and then navigate the menu to produce an additional cross on the display, which you can move on the x and y axis to the bullet hole, save and then shoot again and fine tune the x until it covers the bullet. Freeze mode eliminates the need to hold the gun steady, as you readjust the cross to the bullet hole as it freezes the display.

Conclusions in the field

Quantum Lite XQ30W - considering this is an entry level device its quality of detection shows how fast the industry is changing in terms of price and ability. You get all you need in terms of thermal detection for spotting a heat source at distance. Yes, the resolution is not as good as the higher end models, but all you need is a spot of light to know a warm body is there.

This stripped down version will easily detect a fox out to 500 yards but discerning what it is has less detail of the image but you soon learn the ‘thermal signature’ of differing animals, they have differing hot spots such as eyes, ears and under belly. It’s also very easy to use with non-menu led buttons mostly, although I would definitely go the Li ion battery pack to save on AA battery usage. You also need to calibrate more often than the other models to keep the image on screen clear, detailed and good contrast.

Pulsar Helion XP38 - Really impressive, the image on screen from the higher 640x488 pixels is amazing and now detection increases right out to 750-800 yards. You can discern far more detail to the picture, so animals are easier to recognise and not just a shining blob. There’s superb detail and fidelity to the image and really nothing can hide!

The menu-in-menu options will appeal to younger computer savvy users, but I have to say it baffles me a bit. But it`s all there with good variety of functions and an excellent video and picture capture for later use. The battery pack is so much better, I kept it on all night and it lasted easily! This is better, as I found the waterproof cover to the ON/ OFF switch difficult to use!

Pulsar Trail XP38 - Thermal weapon sights have to be good, as you need to be able to place the reticle for a clean shot. The Trail offers a superbly detailed image with a green tinge to it that was better than the Helion. Looking across a field, I could see deer and foxes out to 800 plus people at 1000 yards. Actual detail for me would be 150-200 yards max for foxes but the limit is the reticle and power, as it’s only 1.2x. I used the dot for all my shooting, as the more complex mill dots etc. were too thick to see the game behind. The digital zoom is fine to 4.5x but after that it pixellated, so detection only. It turned on and off easier and recorded good images and when taken on and off the rifles returned to zero to within 0.5 0.75”, dependent on bases used.

This is just an over view, the next months will bring more detailed reports on each, as I build up data on optimal performance.