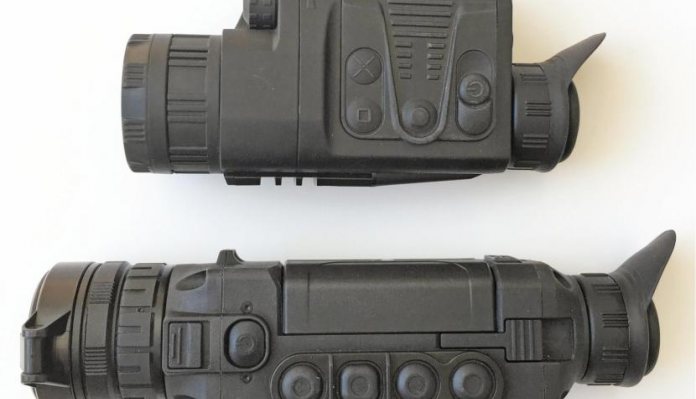 I’ve had an imager now for 10 months, finding it helped enormously during the winter doe cull. My unit was at the lower end of the market, a Pulsar XQ19. I paid £2000 for it last year, now retailing at around £1200 and sold as the slightly updated XQ23V. The thermal market moves very quickly, as I have found to my cost!

There are much more highly specced models out there right now, however. If I were to upgrade, would it be a sound investment or just a better mousetrap? To compare, Scott Country sent me the top of the range XP50 Helion. At £3670, is it worth the extra £2470?

Briefly, my XQ19 incorporated, for me, all the important ingredients. A 384x288 pixel sensor for fine detail with a 640x480 pixel large eyepiece screen, a 50hz refresh rate for smooth panning across a woodland, a quick start up time of 2 seconds, a variety of colour palettes for individual tastes (‘red hot’ is my preference) and a 650m detection range, all of which served me well.

Now the next generation has arrived, in the form of the XP50. In computer terms, each successive generation incorporates ever faster chips, more memory etc. In the thermal arena, the new generation means a 640x480 sensor for finer detail still, enabling digital zooming without overly pixelating the image. Also, Wi-Fi connection to view on a smartphone or tablet in real time, onboard video recording or still images at the press of a button, picture in picture PIP), and a detection range of 1800m. Are all the add-ons really an enhancement, or does the technology get in the way of the job at hand: deer culling?

I plan to expand on the role and utility of the imager for the deer stalker in the next article, but for now, let me be clear that my experiences are in southern England, across woodland and arable farmland. I am not normally inclined to take images and shoot video of deer I come across, so for me, WiFi and remote monitoring of the imager is largely unnecessary. Besides, I already carry binoculars, rifle, sticks and a rangefinder etc, so yet more equipment around my neck better be simple and very useful!

I took both the imagers out on a warm summer evening, looking across the fields to a maximum of about 800m. It was immediately apparent that the larger sensor of the XP50 gives a beautifully sharp, detailed image, but with a narrower field of view. Heat differential on the screen seems well controlled, allowing scanning across sunlit fields without the unit registering ‘everything hot’. The XQ19, by contrast, seems to be overwhelmed in very bright conditions. I have found that partially closing the iris-style lens cover allows the unit to be less sensitive in these conditions, so allowing continued use.

I saw a number of deer, both fallow and roe, the furthest at a maximum of 470m. Both units registered the roe at this distance, so even with the cheaper model I wouldn’t have missed anything over the other! The difference being that I could see it was a young roe through the XP50, as opposed to a smallish deer sized blob through the XQ19. I had the PIP function set up on the XP50, so the main screen was at 2.5x, with a smaller square to the top centre had a zoomed image in. I chose 10x for general viewing, but could have had 5 or 20x too, which I found useful for taking a photo. Thus, I could scan the field and, having found a heat source, re-centre; so, putting the hot spot in the zoomed area for recognition. It worked like a dream as, once set up, nothing needed pressing on the imager body, as it was all there.

This I really liked, as I had earlier sat at home in the kitchen, a little deflated, running through the menus to get used to the controls; a short press on the up or down button gave small incremental changes to the zoom, but a long press on the down button brought up the PIP, then further short presses scrolled through the 5x, 10x and 20x option. Phew. Could I remember that in the field, plus all the other menu options?

So, as I left the truck, I had the XP50 set up as described, hoping I wouldn’t need to change anything. The only other thing to do was take some images, all controlled with a separate button. Long presses to scroll through video - still image - video, then short to start or stop a recording, or take a picture if in stills mode.

As the evening progressed, I realised I was using the XP50 more than my XQ19, with which I was obviously more familiar. It dawned on me that the former’s highly detailed screen is much easier and more relaxing to look at for extended periods. By contrast, the XQ19 viewfinder was grainy, and I guess my eyes/ brain had to subconsciously work harder to process the image. I stress, nothing escaped the XQ19, I could see deer, hares and rabbits, but as the distances got longer, they became hot blobs rather than bodies with necks, heads and ears. So, over the open fields, the XP50 is the preferable unit!

Being summer, the woods were not really accessible, but a walk around a coppiced area showed up the restricted field of view of the XP50 compared to the XQ19. I really needed to move the unit around to cover the foreground and middle distance, whereas the wider view of the XQ19 took everything in in one sweep. The PIP feature wasn’t useful in the woods, as most things are close enough to identify shape and species without zooming, even with the less detailed sensor of the XQ19. Everything stayed in focus with the 19mm lens, but the XP50’s 50mm lens needed to be re-focused if you looked at anything at less than 15m away.

The imagers are shaped differently, the XP50 longer and narrow, the XQ19 squatter. The large, relatively exposed lens of the XP50 is, I feel, vulnerable to damage, whereas the XQ19s is smaller and well recessed. The button controls are one-hand operated on the cheaper unit, but I found the XP50 buttons were not placed well for my hands. The ON/OFF/screen OFF/calibrate button needed a press from my left hand and was not so intuitive to use overall.

Summing up, the XP50 is an impressive imager for open fields, the hills, recording stills and video. For some countryside roles this would be ideal, including recording poachers from afar! Having been very happy with my XQ19, I now see the real benefit of the 640x480 sensor and would like to have one in my imager. Back in the real world, however, 70% of my stalking is in the woods, and the wider field of view and depth of field means that for me the XQ19 (XQ23v now) is the preferable unit. Plus, I could spend the money saved over the XP50 on a few trips hill stalking in Scotland or even an African safari - £2470 is a lot of money!