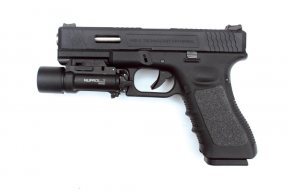 Airsoft is a fast-paced, dynamic game to play, but there’s a side of it that really gets my pulse racing and that’s a good night game. Not all sites get to grips with this type of game as obviously there are inherent dangers that not everyone is comfortable with, but if you get an experienced site operator that knows what they’re up to not only in terms of controlling the flow of play but also in relation to lighting and pyrotechnics then playing after dark can be absolutely exhilarating!

I’ve been lucky enough over the years to play on both urban and woodland sites after darkness falls and have to say that I absolutely love it; everything slows down, movement becomes more considered and both situational awareness and tactical skills have to be at their sharpest edge. Sound carries further in the still of the night so patrolling and ambush drills need to be spot on.

It’s when things kick off though that the adrenalin really kicks in; suddenly an explosion lights up the night and you find yourself in the middle of a firefight with BBs whizzing everywhere, and there’s nothing better than seeing tracers float in towards your position, then unleashing a burst of the same in return! Flames burn brightly from ‘artillery’ strikes and taclites pop on and off all around, lighting up dark corners momentarily to ensure that everything is clear.

Up until now there have been various solutions to lighting up tracer BBs, be that a dedicated unit set up internally to your RIF or an external, battery powered tracer unit. The latter are the easiest to work with as you just screw them on in place of your flash hider, and as they resemble a suppressor there’s also a certain cool factor associated with them. Tracer BBs themselves are a difficult thing to get right, and most manufacturers just go with .20g to keep life simple.

Simple, of course, is not a phrase I ally with the NUPROL team, in as much as they will go to great lengths to get things 100% right for us players. We’ve seen them develop their extensive range of Diamond Grade BBs in all possible weights, and even these have been revisited and improved as new processes have been developed in house. Not content with just offering .20g tracers, NUPROL have specifically developed them in .20g, .25g, .28g, and even .30g; to the best of my knowledge this is the first time that this has been done and it’s superb news for those of us that tune our RIFs to work with a specific weight of BB.

Of course this is all very well, but you still need a tracer unit to activate and light up the BBs and once again NUPROL have come up with a great solution to this with a neat little package that does the job nicely. The last time I visited their offices the prototype of their new unit had literally just arrived. First of we tested it in the warehouse and the results were dramatic, a ‘hose’ of BBs reaching out into the darkness. I subsequently took it away and one dark night got onto the range, testing both the different weight BBs and the unit and everything performed flawlessly.

There’s no price yet on the unit itself, but what I can tell you is that it’s a very neat package that would be equally at home on a carbine or pistol, and it works on easily sourced AAA batteries rather than a fancy charger; knowing the NUPROL team though I’m sure it will be sensibly and keenly priced!

With tracers covered, I next took a look at the range of tactical lights that NUPROL are offering. This is a tight range of just six models at the moment, two of these being LAMs for the L85 series. Of the others three are for pistols and one specifically for rifles, carbines, and SMGs.

At £39.99, the NX200 is a light designed to be fitted to a range of railed handguns, giving the ability to quickly acquire targets in low-light conditions whilst allowing you to keep both hands on your pistol. The torch is constructed with an alloy body and head, a solid polymer toggle switch at the rear, and features a high power 200 Lumens Genuine CREE LED Bulb. The light’s rear switch features an Ambidextrous Textured Toggle, allowing activation by both left- and right-handed shooters. Included in the box is a spare fitting plate and Allen Key. This is perfect for any night game or CQB situation, as you can light up an entire corridor or sweep out corners in any room with added accuracy and visibility.

The NX300 at £54.99 has the same excellent build quality of the NX200, but increases illumination to 300 Lumens whilst being only marginally larger in the head area.

The NX400 Pro comes in at £84.99, but not only does the power increase to a whopping 400 Lumens you also get an incorporated adjustable laser. The back of the laser also holds the controls for several lighting options including the torch and laser being on at the same time if your desire.

Moving up to the rifle model, theNP500X is real beast! It’s a quick-detach RIS mounted vertical grip which incorporates a main 500 Lumen CREE LED main light and two low-power LED navigation lights. There are dual pressure pads on grip to activate main light, and you simply twist the cap on the battery cover to lock the light off to prevent accidental activation. Again a twist of the rear switch of the main light gives you permanent activation. The NX500X uses 3x CR123a batteries (not included) and at £99.99 is a superb bit of kit!

In my mind, when it comes to lowlight CQB or night games NUPROL really have done the business yet again, proving once more their knowledge of airsoft as players themselves, and knowing what we want and need. I am certain that they have even more to come and I’ll keep you fully updated as new items are released.

For now you can keep an eye on their website www.weairsofteurope.com.