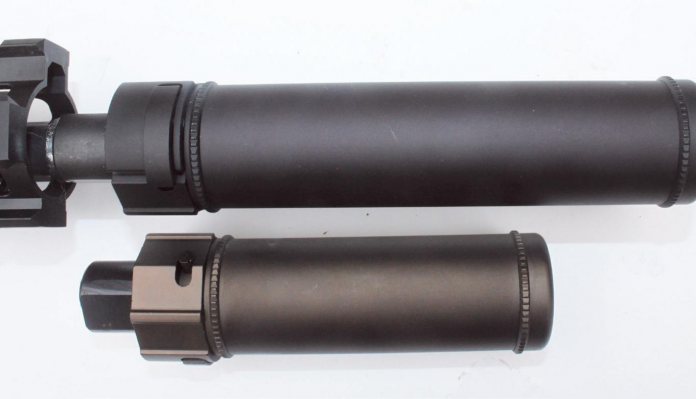 Given that all airsoft replicas are ‘smoothbores’, having a longer barrel is going to aid accuracy; just think how long the old smoothbore muskets had to be. That is a very good reason to fit a suppressor to an airsoft replica, but even if you’re not going to try and increase performance, there is of course the undisputed ‘cool guy’ factor of adding a ‘can’, especially if you are trying to replicate a very specific loadout; if you’re going to try and nail certain ‘SF’ styles, then you are definitely going to need a suppressor.

Luckily enough, the latest addition to the ever-expanding NUPROL range of accessories adds to their BOCCA family of products. First off we had the excellent, well-priced BOCCA rails and now comes a series of barrel extensions/suppressors.

The longest of the new models, at 19cm, is the metal two-piece COBRA, which costs around £20.00 and is available in Black. This is a versatile piece of kit, as you simply unscrew the dimpled collar from the main tube and attach that to a standard ‘Birdcage’ flash hider. Screwing the main tube back into the collar draws everything together solidly, and it really is as straightforward as that!

The BOA model from the new series is again made of metal and comes in two lengths, 17- and 13cm respectively. This is also a two-part design, as you get the main suppressor tube plus a rather nice steel 14mm CCW flash hider to give a fully functioning, ‘lever and twist’ quick-detach system. The BOA also comes in 2 colours, Black and ‘SF’ Bronze, which ties in nicely to the BOCCA rails! Expect to pay around £25.00 for the BOA series models.

If you’re going to buy yourself a SCAR-L variant, then the metal MAMBA in Black at around £25.00 is going to be the fellow for you, as it neatly resembles the ‘SOCOM’ style out there in the real world, again, this is a two-part design, with a tube that screws easily onto a SCAR-like flash hider that is included. At 15cm, it’s a really nice length and works well with the SCARs, but it would have been nice to see a longer version for the SCAR-H.

The VIPER is the entry level model for the BOCCA series of suppressors, and it really isn’t going to break the bank, as you’ll be able to pick one up in Black for around £10, which is just superb value! It again has a metal tube and is threaded both ends, so that it will mate with either a 14mm CW or CCW thread; very neat!

Now if you want to ‘go’ properly ‘loud’, rather than quiet, then the last article you are going to love! The COPPERHEAD is NUPROLs take on the venerable ‘sound hog’ barrel extension, and boy does it add some volume! Available in Black or ‘SF’ Bronze, with a 14mm CCW fit, a COPPERHEAD will set you back around £15.00.

The fit and finish of all the models is spot-on, and the prices for all are very attractive indeed. As I write, the first drops of stock into stores have been taking place, so you should be able to find these beautifully packaged suppressors pretty easily!