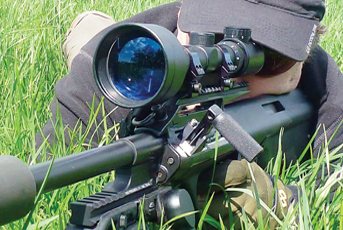 The UK-legal, straight-pull (Z-SP) Steyr AUG bullpup has been around for some time. It’s fair to say that Steyr didn’t exactly push the boat out when it came to adapting their original design to manual operation. The trigger is heavy/creepy and the twin return springs are too strong and the small charging handle is not designed for continuous use! Despite that they are well built and surprisingly accurate (once you get the hang of that trigger).

What’s needed is a bit of fettling and pimping! However, the comparatively small numbers in circulation makes manufacturers think twice before developing upgrades in general. The result that aftermarket enhancements have been few and far between and include an improved trigger (Trigger Tamer) and an under rail that allows the fitting of a bipod amongst others.

However, the aforementioned small cocking handle combined with the heavy action springs are one of the major issues, but there’s a solution!

Peter Sarony (Armalon Ltd) a noted innovator in the world of firearms adapted his Easy-Cam a system for improving primary-extraction on AR-type rifles to sort out the AUG. The result is a device that makes light work of un-sticking fired cases from the chamber (valuable in itself, since the AUG is designed to extract only unfired rounds manually). Plus it offers the tangible benefits of a larger/more practical charging handle with greater mechanical advantage, thereby making cycling the action considerably easier. The result: fast-fire, pain-free fun!

The pre-production version of the Sarony AUG Easy-Cam comes with full pictorial instructions, so installation presented no problems. The first job is to remove the polymer grip of the original charging handle, along with the forward-assist mechanism, by punching out the roll-pin that secures the former to the metal frame underneath.

After this, a silver-plated steel slide - to which a blacked steel cam lever is mounted via a spring, is dropped over the top of the bare frame. Followed by the C-shaped, anodised alloy body of the Easy-Cam, which is then secured by two hex-head screws that pass through it and the slots in the frame. The next step is to align the cam lever within the Easy-Cam’s body, insert a pivot pin, and slip the E-clip provided over the end.

Finally, it’s time to attach the handle, which consists of a knurled, anodised alloy cylinder that is free to rotate around a central spindle that screws into the top of the cam lever. The handle sticks out from the action at 90° and faces down at 45°s, but the cam lever also has threaded holes fore-and-aft into which the handle can be fitted to give a narrower profile for storage – a nice touch. Installation takes about 15 minutes; all that’s required is to lubricate the bearing surfaces with a few drops of PTFE dry lube, and you’re ready to go.

The first things you notice is that your hand falls much more naturally onto the new handle than the old one and you can get 2-3 fingers around it and not just one, however that knurling is pretty sharp! When I mentioned this to Peter he was already one step ahead, and replied that this had been noted and production models will have a series of grooves machined into an otherwise smooth handle.

As you pull back the cam lever causes the cam body to move to the rear of the silver slide, directing the initial thrust to the job of primary extraction. Thereafter, the rearward force applied by the shooter draws the handle and the working parts aft, and as that force is spread across the broader surface of the new handle and transmitted through a longer lever, the impression given is of a lighter, smoother action. In practice, you don’t think of any of this, of course: just grab the handle, snap it sharply back, and let go.

The bolt-hold-open function hasn’t been forgotten either, though the handle can no longer simply be cocked clockwise at the rear of its stroke to set it into the hold-open notch in the receiver. Instead there’s a small sprung block that engages with the notch when you depress the head of the stainless screw to which it’s attached. This is a little fiddly at first, and a larger button would make things easier, but you soon get the hang of it, and to release it you just pull back on the handle. Last-round bolt-hold-open, meanwhile, works as before.

The only other trick you have to learn is that the Easy-Cam must be operated parallel to the rifle. This sounds obvious, and comes naturally when the rifle is shouldered, but the larger and more protruding handle readily tempts you into pulling it at an angle when doing NSPs or otherwise testing function. Torquing things in this way doesn’t appear to harm the Easy-Cam, but it does substantially increase the effort required, so is best avoided.

This caveat aside, the Easy-Cam genuinely makes running the AUG Z-SP a much less fatiguing and more pleasurable experience. It’s not cheap, but it is ingenious, it does work, and in my opinion, it’s well worth having.