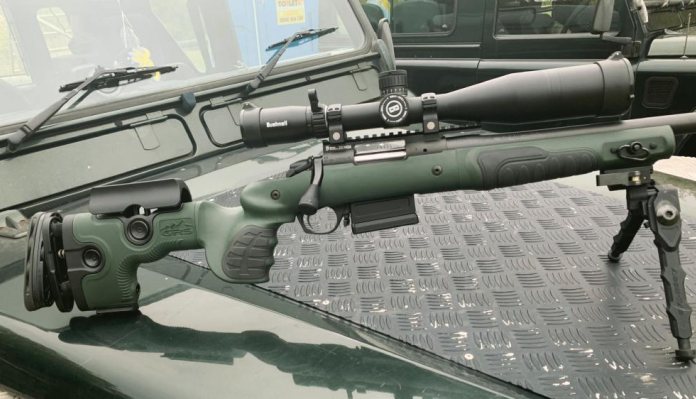 It’s not often I buy a rifle that is not purely for hunting use, but I make an exception for Bergara’s B14 HMR. With its decent, 4140 CrMo steel, 24”, medium heavy barrel, chambered in 6.5 Creedmoor it looked good. But what clinched it for me was the stock.

It’s made from a solid, synthetic material in an attractive brown with a black over web. Integral, is an aluminium inner chassis with a rod that projects into the forend for added rigidity and totally free-floats the barrel. It’s adjustable with a series of removable spacers to vary the length of pull (LOP) from 12.25- 14.5”. There’s a height-adjustable comb that gives around an inch of movement. The general shape is like a McMillan A5 with a squared off profile, gripping hook and an upright and well-proportioned pistol grip. The build is also ambidextrous and features not only QD sling studs underneath, but two pairs of ambi QD cup sockets front and rear. The only thing it lacked was a section of Picatinny rail, which I remedied for my Accu-Tac bipod.

However, just when you think you’ve got it right, something else comes along. In this case, it was from GRS (Grodas Rifle Stocks) in the form of their Bifrost. Launched in 2018, it’s the logical evolution of their original laminate Sport Varmint and later Berserk synthetic. Available in a number of inlets, they now offer it for the popular B14 HMR, which both surprised and interested me.

It weighs 1.35 kg and is made from a rigid polymer, by comparison the HMR unit weighs 1.67 Kg. Although one piece, it’s built from three separate assemblies, which are solidly fixed together; forend, action and pistol grip and butt sections. There are also steel cross bolts at the front and rear of the action void, as you might find on a heavy calibre big game rifle. The void is further strengthened by integral cross bracing sections.

This rigid build shows rubber inserts on the pistol grip and forend that really do the job in all conditions. It comes with one, short Picatinny rail section that can be fitted at 3, 6 or 9 O’clock on the forend tip or under the butt to accept a monopod. From the box, there’s a QD sling stud at the 6 O’clock for a Harris-type bipod, there is also a socket in the nose for mounting the spigot-type VersaPod system. Plus, three, cup-type, QD sockets, two on the forend sides and one under the butt for QD swivels. Pity they did not put two on the butt sides instead.

The action screw holes are bored oversized to act as pillars. I get the impression that it might not be wise to drill them larger or fit aluminium types or try synthetic bedding. Saying that, the action slides in nice and tight with no movement when bolted down to the recommended 5.2nm (Newton Meters) of torque.

As an owner of the original GRS Sport Varmint laminate unit, one of its standout feature is the pistol grip. Scalloped out on the right with a generous palm swell, it feels more like a thumbhole, but without the connecting strap. It’s also available in a left hand option too. Add to this the grip is offset by 6°, which offers possibly the most comfortable and non-stressed firing hand position. The butt is fully adjustable using the new and improved SpeedLock 2 system for LOP and comb height. It differs by the fact that the (now plastic) buttons can be pushed through from either side to unlock and lock in the middle position.

There’s a slight anomaly here, as once you’ve set the height/length, sometimes the button will not lock, due to the fact it hits a tooth and not a slot in the incremented rod, which stops it moving. The trick here is to give the pad or comb a little tap as you apply pressure on the button, so it realigns and locks into position. This does not always happen, just be aware. The Bifrost adds as standard two more adjustment areas; the ½” Limb Saver recoil pad plate can be moved up and down and rotated in five positions left and right. This allows for the best possible shoulder fit and also helps to dial out some recoil effect too.

Unusually, the LOP starts at 14” and extends to 15.5” (1/2” recoil pad fitted), good for long armed guys like me, but I can see some of smaller stature struggling. Comb height starts at ½” and hits maximum at 1.75”. The B14 has a round bodied action (like the Remy 700) and it’s possible to push it down so it does not sit true, which affects the position of the trigger blade and therefore fitting the mag housing. You just need to rotate it into its correct orientation.

To engage the action bolts, you have to squeeze the receiver down into the stock and then wind them in using a 3mm Allen key to 5.2nm. The first time I did this, there was a loud ‘crack’ as I hit the setting. Worried, I took it out but could not see any damage or separation and the rifle shot fine afterwards. However, the bolt dragged on the feed lips and full magazine insertion was very hard if not impossible with the action closed. It occurred to me that the magazine was sitting too high and the bottom metal needed to drop a little. A pair of 0.661 x 0.040” steel washers (from B&Q) between the inlet and bottom of the mag well assembly sorted this, with easy ‘IN & OUT’ and feed reliability unchanged.

In comparison to the HMR furniture, which is quite slim, I preferred the Bifrost, as it gives more to get hold of and put your head on, the angled pistol grip and tuneable recoil pad offers that extra bit of gun fit and address and are both excellent features. I found this most noticeable when shooting. However, the fussy locking offered by the SpeedLock 2 is a bit annoying, as is the fact hard magazine insertion needs sorting by the end user, well certainly on my rifle. However, given the choice, I’d still go with the GRS. Obviously, the Bifrost will fit any B14 regardless of barrel width and also offers left handed and short and long action options.