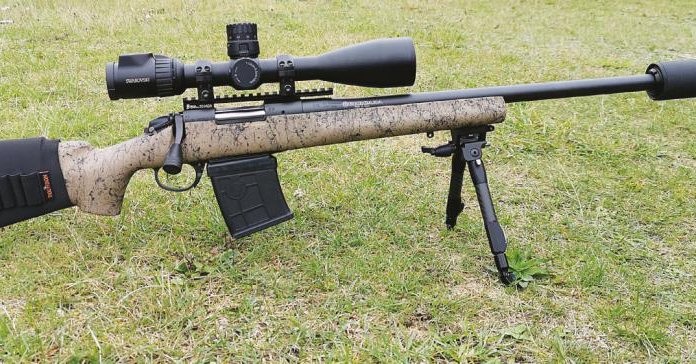 Manufacturers often offer a large selection of bolt-action, centrefire rifles using the same action. However, they add or remove different options in order to adjust the price point, making the product accessible to a wider customer base. For example, shooters can choose from a synthetic, laminate or graded wooden stock and/or a phosphate, stainless or Cerakoted finished barreled action. There’s also the choice between different feed systems, depending on their budget, as some are cheaper to manufacture than others.

A blind, box magazine, is not very common these days; this simple, fixed system must be loaded and unloaded from the top. It is made up of three main components, a leaf spring, integral cartridge box and a follower. The design helps to save weight and, in a hunting environment, the loaded rounds can’t fall out. As well as a low capacity, the drawbacks are that they vary in quality, making some more reliable than others. They can be tricky to access, slow to fill and difficult to unload safely. A hinged floorplate goes some way to solving these issues; internally, the design is the same, but it includes a hinged base plate integral to the bottom metal. It still loads through the top, but at the press of a button you can dump the contents, so offering a faster and safer unload. These are again reliant on quality, as some can pop open if the catch gets caught while moving through undergrowth, or during heavy recoil, dropping ammunition everywhere!

A popular choice is the detachable mag system (DM), which is my preference, as they come in various sizes/capacities, make loading or unloading easier, safer and a lot faster. However, a lot of manufacturers use their own design of DM, which are often low capacity, vary considerably in quality and use dimensions that limit the cartridge overall length (COL). This is not a problem when using factory ammunition but can stop a reloader from maximising the performance of their hand loads. On top of this, replacement or spares for some rifles can be very expensive. As a result of these factors and that some guns are only available with a floor plate, there is huge demand for aftermarket DM systems.

A common option is for a gunsmith to fit a new CNC-machined bottom metal to the stock, allowing it to feed from the popular Accuracy International Chassis System (AICS) compatible mags. However, this can be a costly process, requiring skill to fit correctly and to get it to feed reliably. As a result, there are a range of affordable, modelspecific, retro-fit systems on the market, including the popular Unimag series from the Australian company, Lucky Thirteen (L13), distributed by Raytrade UK. They manufacture straight-fit versions, which can be used as a direct replacement for the OEM (original equipment manufacturer) ones. They stock these for the Remington 783 for £119 and the Tikka T3 for £149. Featured is their Remington 700 DM conversion kit, which is designed to replace the OEM floorplate, a simple upgrade, requiring no modifications, inletting or alterations. Sounds good!

I recently purchased a second-hand HS Precision stock that was originally off a Remington 700. It was for my Bergara B14, which shares the same footprint but unfortunately it came with a low-capacity hinged floorplate, which didn’t function properly. I contacted Raytrade UK and after explaining what I needed they sent me a suitable L13, Unimag Remington 700 detachable magazine conversion kit. They offer one for .223 Rem and another (featured) that can function with both .243 and .308 calibres, I was also told that it would also work with my 6.5 Creedmoor.

Inside the kit is a black anodised bottom metal (BM), which is manufactured from high-grade aluminum. It includes an ambidextrous paddle-style mag release catch positioned in front of the trigger guard for ease of use, while also helping to prevent accidental release. Dimensions have been carefully considered and the design accommodates standard and aftermarket triggers. Included are some instructions and a pack of metal shims. It is attached to the stock using the original action screws and should only be fitted to pillar bedded furniture like the HS Precision. Wooden, laminated or some polymer stocks can compress under the torque of the screws, making them unsuitable.

The large 10-round magazine has a solid construction, a bright green follower and includes an aluminum upper connected to a polymer body. It can be disassembled for maintenance and cleaning by undoing a single hex screw at the rear before taking it apart.

Installation was simple, the instructions are detailed and include a step-by-step guide with pictures. To start, I safely removed the old hinged floorplate then, using a vernier caliper measured the depth of the front and rear pillars. I checked to see if they matched the tolerances provided, and to establish if I needed to use any of the shims. L13 have gone into detail regarding these and have even included a list of the common stocks and how many shims are required, including Hogue, Bell & Carlson, Boyd and GRS. I didn’t need any, so using a torque wrench tightened the bolts to the suggested 65 inch-pounds, securing the action and new bottom metal in place.

Once fitted, the large size and curved shape of the magazine will not be to everybody’s taste, but this kit is easy to recommend. The capacity, unlike some, is a true 10-rounds and the build quality excellent! I was impressed with how easy it was to fit, and straight from the box, feed was smooth, and it proved 100% reliable during the 300+ rounds I have put through it. The mag release catch is well proportioned and functioned without issue. I wanted to check the magazine’s suitability for the long 140-grain bullets often used for the Creedmoor. I filled it with some Remington 140-grain Core-Lokt (COL 2.734”) and Premier Match factory ammunition (COL 2.780”) and they both easily fit. I then loaded some dummy rounds and found it would accept an approximate maximum COL of 2.819”, meeting most reloader’s needs. Overall, an excellent kit.